After the Delhi gang rape case of 2012, India is once again up in arms against sexual crime. People want justice in the Kathua case, involving  an 8-year-old girl belonging to the Bakarwals, a nomadic community of Jammu and Kashmir. She was brutally raped and then murdered in Rasana village of Kathua district of Jammu region, in January of this year.

The Kathua rape case didn’t get much attention from across the country until last week, when media organizations reported the chilling details of the rape and murder after a charge sheet was filed by the local investigation agency. The charge sheet mentioned the graphic details of the planning and execution of the crime.

The girl was kidnapped on January 10. As per the police report, she was kept captive in a Hindu temple in Rasana village, where she was dosed with sedatives and raped repeatedly for four days, before those accused strangled her to death. The charge sheet filed before the court held Sanji Ram as the main accused in conspiring to commit the heinous crime.

Local police initially investigated the case, but have been accused of destroying crucial evidence. Two officials have also been named in the charge sheet for destruction of evidence. Bloodstained clothes, for instance, were washed before they were sent to a forensic lab for investigation.

The investigation revealed that the crime was planned to scare the Bakarwals away from the village, as they had started settling down in the area for the past few years. The Bakarwals, a nomadic Muslim community, migrate to the hilly pasture areas of Kashmir along with their livestock to graze them for the entire summer season and settle down in the plains of Jammu in the winter season. The charge sheet and media reports suggest that this was not an isolated sexual crime but part of a conspiracy against the nomadic community.

The crime comes against the backdrop of increasing hate crimes against minorities across India since the Bharatiya Janata Party (BJP) came in power in 2014. In April 2017, a Pew Research Center study had ranked India the fourth-worst country for religious intolerance out of 198 nations.

Since the Kathua rape and murder case made headlines across the Indian and international media last week, many protests have taken place across the state of Jammu and Kashmir and India as a whole to demand stern punishment for the culprits and bring justice for the innocent girl. Students across Kashmir held peaceful protests regarding the Kathua rape case; however in several places in South Kashmir students pelted stones at the security forces. The security forces retaliated with tear gas and aerial firing to disperse the mob. Many were injured during these protests. 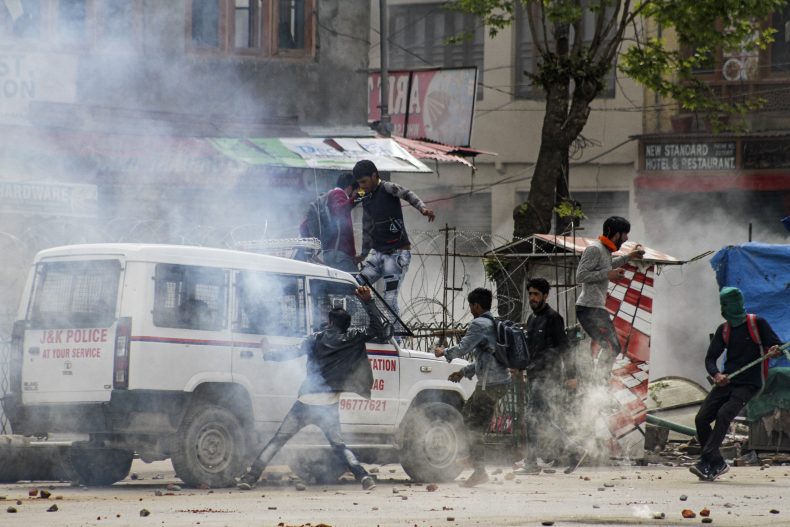 Students attacked a police vehicle in Anantnag town while protesting against the Kathua rape and murder case. Photo by Sameer Mushtaq

“We have been protesting from the first day, since we found the girl’s dead body in the nearby forest of the village. We also blocked the Kathua highway to demand justice for the innocent girl,” a nomad community member, Shahrukh Choudry, told The Diplomat.

As per Shahrukh, people from the Hindu community obstructed the burial of the girl in her own village. Instead she was buried in the nearby Kanna village.

While many protests demanded justice for the young victim, political leaders from the BJP rallied with a fringe outfit called the Hindu Ekta Munch (Hindu Unity Forum), which had sought to defend the accused. They marched on roads in Jammu city with the Indian tricolor flag in their hands to demand that the Central Bureau of Investigation (CBI), India’s premier investigation agency, investigate the case. Along with some lesser-known political leaders, two big political faces of Jammu and Kashmir, Lal Singh and Chandar Prakash Ganga, both state ministers, had also rallied in support of the accused.

The involvement of political leaders in these rallies created an uproar in neighboring Kashmir, a predominantly Muslim region. In Jammu and Kashmir, the Peoples Democratic Party (PDP) and BJP have been in an alliance since 2014. The ruling government faced severe criticism from opposition parties and the people of Kashmir after the ministers joined rallies in support of the suspects. That pressure prompted the resignations of both Lal Singh and Chandar Prakash Ganga on April 12.

While this case is particularly heinous, it is not the first time that Hindus have targeted the Muslim community in the Jammu region. Earlier last year, a political party, the Panthers Party, had put up large signs in Jammu calling for people to “clean” the city of Bangladeshi Muslims and Rohingyas. The billboards called residents to band together against the Muslim refugees to defend the local culture. “Let all Jammuites unite to save history, culture and identity of Dogras,” the signs read, alongside pictures of party chairman Harsh Dev Singh and other political leaders.

On April 13, a day after the two ministers resigned, Prime Minister Narendra Modi broke his silence on the Kathua rape case and the Unnao rape case, which involved the alleged rape of teenager in Indian state of Uttar Pradesh. Modi said, “Incidents being discussed since the past two days cannot be part of a civilized society. As a country, as a society, we all are ashamed of it. I want to assure the country that no culprit will be spared, complete justice will be done. Our daughters will definitely get justice.” 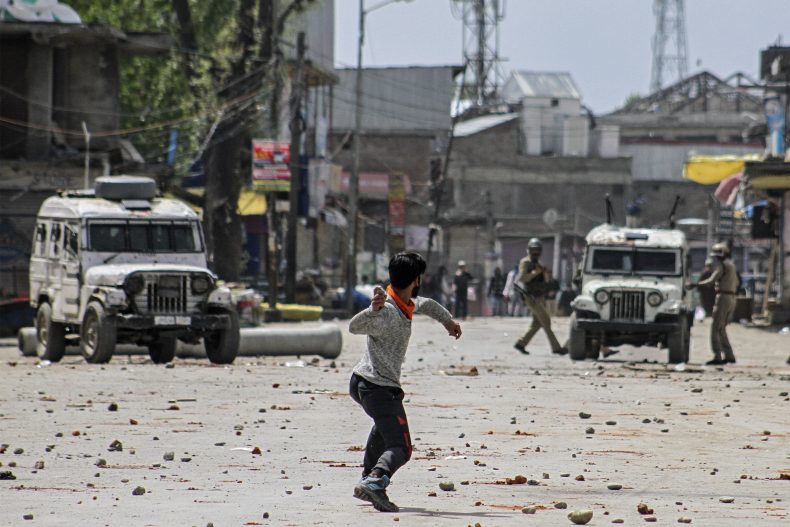 A young boy throws stones at security force vehicles, part of a protest sparked by the Kathua rape case in Anantnag district of South Kashmir. Photo by Sameer Mushtaq.

The protests and continued activism demanded justice in the Kathua case has further highlighted the rape case in the media. But the protesters have also faced threats and physical violence.

“On 21 January we took out a rally and asked for the judicial or CBI investigation. My members were beaten, so was I. I was even taken into custody but thankfully the people and in particular the students protested against this and I got released. They tried pressuring me,” Talib Hussain, an activist who brought attention to this case, told The Diplomat.

The top court of India has asked the state government to provide needed security to the family of the Kathua rape victim and their lawyer.

“Our community is in favor of shifting the case from Jammu to the nearby [city] Chandigarh. We have appealed to the Supreme Court of India through the advocate of this case, as we don’t feel secure in the region,” said Nazakat Khatana the president of Gujjer Bakarwal Desh Tehreek-e-Insaaf, an organization for welfare of community.

He also complained that political leaders have started politicizing the issue. “It is a rape and murder case and should be taken forward just to bring justice to the innocent victim. What can be worse than denying the burial of the child?” he asked.

“Political figures are coming [forward] after the case came into the limelight. They were not there for these four months and suddenly starting appearing on the scene for their political benefit,” he added.

Um-Roommana is a freelance journalist based in Kashmir.

By Avinash Giri and Nantha Kishore from StoriesAsia

Photos from a protest in Delhi's Jantar Mantar area.

20 years after anti-Muslim violence in Gujarat, the victims are still haunted by their memories – and the parallels they see today.

Sexual Violence Against India’s Most Vulnerable

A Dalit girl was gang-raped, murdered and forcibly cremated in New Delhi.

The judge’s report in the case against Tarun Tejpal sparked outrage for its misogynistic scrutiny of the plaintiff.