Ibrahim Hamza Tillozoda is only 4 years old, but for most of his life he has been a hostage of the Tajik regime. This August, however, news of the child’s critical illness helped to set him free. Diagnosed with advanced testicular cancer that Tajik doctors were unable to treat, the boy was in urgent need of treatment abroad. But it was only thanks to diplomatic and media pressure that the government allowed the boy’s family to seek help outside of the country.

Hamza’s is not an isolated case, as for the past several years, the Tajik regime has been using various intimidation methods against the relatives of opposition figures — including arbitrary detention, threats, humiliation, and confiscation of passports and property — to put pressure on political exiles. Consequently, dozens of the regime’s critics abroad have been living in constant fear not only for their own lives, but also the lives and wellbeing of the relatives they had left behind.

It all began in 2015, when the government delegalized the Islamic Renaissance Party of Tajikistan (IRPT), headed by Hamza’s grandfather, Muhiddin Kabiri, in retaliation for an alleged attempt to overthrow the government. While the accusation had little grounding in reality, the regime declared the party a terrorist outfit, jailed much of its leadership and forced hundreds to flee in a notorious hunt for the last strong opposition group left in the increasingly authoritarian state.

The events turned the life of little Hamza upside down. Both his father Ruhullo Tillozoda, a prominent IRPT member, and his grandfather fled to Germany. As Hamza’s sister did not have a passport, his mother, Mizhgona Zayniddinova, pregnant at the time, decided to stay in Tajikistan, unaware of what was to come.

Soon after, the regime confiscated the family’s house together with all their documents, including passports and birth certificates, preventing them from leaving the country. The family’s accounts were frozen, and Hamza’s mother was forced to move in with her father. Then came endless hearings in the security services’ office and long hours of questioning.

Unable to leave, the family became in essence hostages of the Tajik regime.

Ever since, each of Zayniddinova’s attempts to contact her husband has been considered a national security issue, raising accusations of supporting terrorists. “She is not allowed to speak to her husband because that would cause problems for her family, her father, her brothers,” said Muhamadjon Kabirov, Hamza’s uncle and an IRPT member who has received asylum in Poland.

At the same time, their lives have been closely monitored by security services, supported by dozens of local government agents. Hamza’s mother soon lost touch with her husband, relying on third parties to exchange information infrequently about their lives. Consequently, news about their wellbeing has reached their family members abroad only after a significant delay.

That was the case with Hamza’s illness. His health deteriorated in December 2017, which prompted his mother to consult a local doctor. Although there are no clinics in Tajikistan that specialize in testicular cancer, in February this year, the doctors decided to operate on the boy. The operation failed, however, and soon after the tumor on Hamza’s testicles grew again, leaving the boy in constant pain.

News of Hamza’s illness reached his relatives abroad only in July, when an unnamed family friend, who met with the child’s mother in Tajikistan, sent them several pictures of the boy’s tumor. Alarmed by the news, the family started an online petition in a desperate attempt to save Hamza’s life.

The news soon reached the media, foreign diplomats, and human rights groups, which joined forces to exert pressure on the Tajik government. The petition gathered over 140,000 signatures, which, as Kabirov remarks, is more than one needs to run in the presidential race in Tajikistan.

The situation alarmed the Tajik media, too. During a press conference, when asked about Hamza’s health, Deputy Minister of Health Saida Umarzoda denied the possibility of the boy receiving treatment abroad. “In the fourth stage of oncological diseases, the patient is given only palliative therapy, alleviating the symptoms of the disease. This is the case both in Tajikistan and in other countries,” she said.

“There are no methods to cure the disease. Therefore, there is no need to send him to foreign countries. I understand that his parents do not want to accept this fact,” she continued. But according to the boy’s family, who consulted medical specialists in Russia, Turkey, and Germany, judging from the pictures, the boy could undergo an operation that could help him fight the cancer.

The minister’s comment sparked outrage, which together with growing international pressure pushed the government into allow Hamza to leave. While initially the passport office ignored Zayniddinova’s application for passports for her and her son, the second time she applied, she received the documents within two days.

With the proper documents in hand, on August 2, Hamza and his mother successfully arrived in Istanbul and the boy began treatment in a local clinic. On the same day, a group of Tajik exiles organized a picket in central Warsaw, Poland to voice their anger with the Tajik government’s cruel methods, show their appreciation for the international support the case received, and push Tajikistan to allow other dissident families to leave the country.

“For three years now, the authorities of Tajikistan have held women, children, old people, and those who dared to criticize the current regime hostage,” Visidin Odinaev, a Tajik activist, said through a megaphone to a crowd of protesters. “A 4-year-old, Ibrahim, and his mother became political hostages in the 21st century – but this is just one of thousands of similar stories.”

At the protest, Bibirukiya Kabirova, Hamza’s aunt, was happy about the turn of events. But she has no illusions about the reality of the situation. “Luckily, Hamza is already in Turkey with his mum, but unfortunately, his two sisters stayed in Tajikistan as hostages, just like Hamza,” she told The Diplomat.

When asked for a comment on Hamza’s case, an employee of the Tajik Ministry of Internal Affairs told The Diplomat that since the boy was allowed to leave the country, there is not much to comment on. He also did not reply to questions he initially agreed to answer via Viber.

For Tajik authorities, the case is closed. 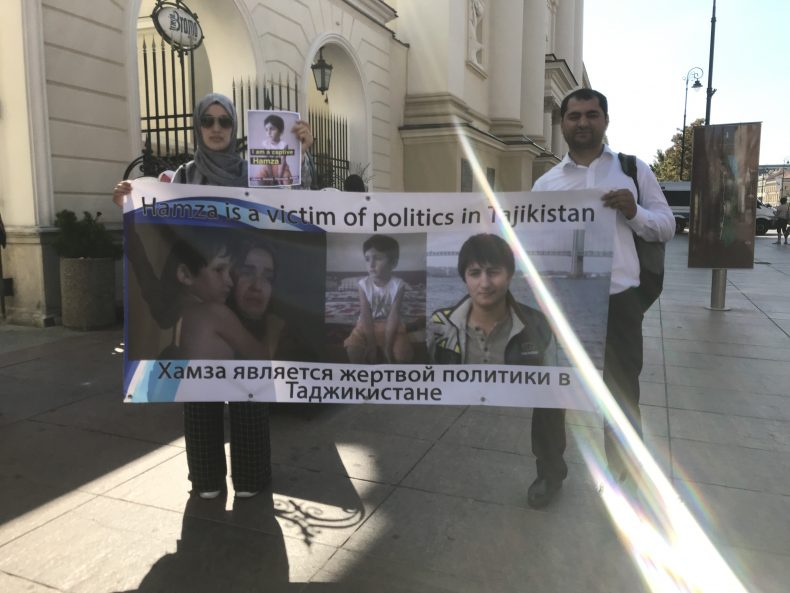 Hamza’s aunt and uncle at the Warsaw picket. Photo by Agnieszka Pikulicka-Wilczewska

“It is of course welcome news that Tajik authorities have issued new passports to Hamza Tillozoda and his mother,” Steve Swerdlow, Central Asia researcher at Human Rights Watch, told The Diplomat.

“But this 4-year-old child and his family would never have been in this horrific situation if Tajik authorities had not been imposing a cruel and sadistic policy of collective punishment on them and the relatives of other dissidents abroad in the first place,” he added.

Saipira Furstenberg, project manager of the University of Exeter’s Central Asia Political Exile Database, agrees that family members are frequently used as a leverage to silence and stop the political activities of exiles, which constitutes an important deterrent tool.

“The relatives of exile activists are further unable to leave the country, as the government restricts their movements via travel bans,” she told The Diplomat. “Such techniques of repression significantly affect the everyday life activities of family members of political exiles. As such even when individuals live in exile [for political reasons], their life stays connected to their homeland and they still feel state repression or ‘state effect.’”

The victory in Hamza’s case, thus, while a welcomed development, does not solve the problems faced by the families of Tajik political exiles. The government did not need long to prove that this is the case.

On August 4, 10-year-old Fatima Dovlatova, the daughter of well-known human rights activist Shabnam Khudoydodova, who received asylum in Poland, was removed from a Dushanbe-Almaty flight with her uncle and grandmother. They were on their way to reunite with her mother. According to Tajik officials, the girl was on a list of wanted persons.

“The government of Tajikistan hits when it hurts the most,” Furstenberg said.

Agnieszka Pikulicka-Wilczewska is a journalist focusing on the post-Soviet space.

“When the repression machine begins to work, it destroys everyone."

The Fall of Tajikistan’s Opposition

President Emomali Rahmon has consolidated power by leading a merciless campaign against any opposition.

The designation by Russia of the IRPT as an extremist organization may put Tajik citizens in Russia further at risk.