As the COVID-19 pandemic worsens all over the world, a coronavirus-related disinformation campaign from China has been on the rise globally. This is true of China’s offensives against Taiwan as well. The Investigation Bureau of Taiwan has substantiated a significant increase in the dissemination of disinformation regarding the coronavirus outbreak in Taiwan. The disinformation campaigns often spread through social media platforms and are promoted by a variety of fake accounts through either posts or comments. Not surprisingly, most of the contents can be traced to Chinese online forums.

The Taiwan FactCheck Center (TFC), a local nonprofit fact-checking organization, pointed out that these messages have several characteristics that suggest they are fabrications. First, the sources cited in the message, such as “my friend’s aunt” or “my mother’s cousin,” are ambiguous. Second, the disinformation posts often contain expressions used only in China as well as simplified Chinese characters and are not relevant to the situation on the ground in Taiwan. For instance, President Tsai Ing-wen is sometimes called “Governor Tsai” in such messages. Third, the messages often aim at causing panic. Many of them state that Tsai and other Taiwanese officials have been infected by the coronavirus.

While further analysis is needed to ascertain whether such actions are being undertaken by Chinese authorities, it is confirmed that these disinformation campaigns are originating in China, the Investigation Bureau chief has said.

Fortunately, the tactics seem to have had little effect on Taiwan so far. The failure of such campaigns is rooted in three major factors.

The first is the Taiwanese authority’s high level of transparency and responsiveness. Taiwan is no stranger to the abovementioned Russian-style influence campaign tactics; during the local election in 2018, the exact same methods were used to discredit certain candidates and political parties. Furthermore, alongside the local election, a multi-question referendum was held on a broad range of issues, including marriage equality, energy use, and food importation standards. Disagreements on the issues among Taiwanese citizens provided a fertile milieu for disinformation campaigns to sow doubt and create division. These campaigns, according to the Taiwanese authorities, were part of Beijing’s broad effort to meddle in Taiwan’s election and exert control over the island nation.

In order to counter the negative influence of such operations, Taiwan’s government has taken measures to facilitate communications with the public. The strategies involve the adroit use of social media platforms to deliver policy goals and enhance government transparency. Additionally, the government’s preparedness to respond effectively to important policy issues has been remarkably boosted. A well-informed citizenry that can distinguish between credible and false information is more immune to disinformation. Indeed, such strategies proved to be efficacious in Taiwan’s 2020 presidential election. Despite all-around Chinese efforts to sway Taiwanese public opinion, Taiwanese citizens re-elected the incumbent President Tsai, who is not favored by Beijing, with the highest number of votes in Taiwan’s history.

The Taiwanese government has continued to regard transparency and responsiveness as the top priorities in implementing COVID-19 containment policies. The Center for Disease Control has set up a dedicated phone line for people to inquire about the situation and report suspicious information. Besides, the government has been actively employing chatbots on Line, a WhatsApp-like platform widely used in Taiwan, to announce important policies and statistics on a daily basis. With statistics about infections readily available, media outlets are able to better inform people about how transmission occurs among the confirmed cases through tree diagrams or charts. Further, the Central Epidemic Command Center (CECC), directly supervised by Minister of Health and Welfare Chen Shih-Chung, has been hosting news briefings almost every day to inform the public about the latest developments regarding COVID-19 and the government’s plans to address them. The investigation authorities have also coordinated with local police stations to increase scrutiny on online platforms, in order to stop disinformation from circulating and inciting panic.

The second factor in Taiwan’s resiliency is active engagements and collaborations with civil society. Not only has the government enhanced efforts to dispel online rumors and contain public panic, but nongovernment sectors are also playing essential roles in countering virus-related disinformation. For example, the TFC has set up a project focusing on clarifying misinformation with respect to the COVID-19, which includes systematically tracking and categorizing viral falsehoods, making clarifications accordingly, and providing the public with sufficient and accurate information. The TFC has also collaborated with Facebook: once a post is confirmed to be disinformation or misinformation by the TFC, it will be labeled as false and grayed out on Facebook timelines, with an explanation provided in a footnote. In addition, on March 14, Facebook announced that they had taken down more than 60 accounts for inauthentic activity, such as pretending to be Taiwanese users and spreading misleading messages.

Moreover, the TFC has created simple guides on how to distinguish between suspicious and credible statements, which include ways to identify fake accounts on social media platforms and “DOs and DONTs” to follow when seeing unconfirmed information. The abovementioned measures have greatly raised public awareness of critical problems brought by disinformation, and people are therefore taking steps to prevent themselves from being susceptible to false information.

Another factor that helps build Taiwan’s resiliency to Chinese disinformation campaigns is a sense of vigilance against Chinese propaganda shared by government agencies as well as the general public. This could be explained by the long history of Chinese interference in Taiwan’s democracy. Back in 1996, when the island nation held its first direct presidential election, Beijing had the People’s Liberation Army shoot ballistic missiles near the ports of Keelung and Kaohsiung in an attempt to intimidate the Taiwanese electorate and discourage them from voting. (The move eventually backfired; voter turnout that year was 76 percent, the highest in Taiwan’s history.) From then on, multifaceted Chinese efforts to undermine the integrity of Taiwan’s democratic processes have been ever-present. Such efforts are particularly intensive during times when social and political tensions are escalating in the island — for example, when a deadly virus looms over Taiwan, which is currently the case. As a result, for many Taiwanese, the ongoing intensified Chinese disinformation campaigns are predictable. Furthermore, the government and civil groups have also been reminding the public to be wary of disinformation. Therefore, many Taiwanese people have a heightened sense of vigilance against such Chinese influence operations. 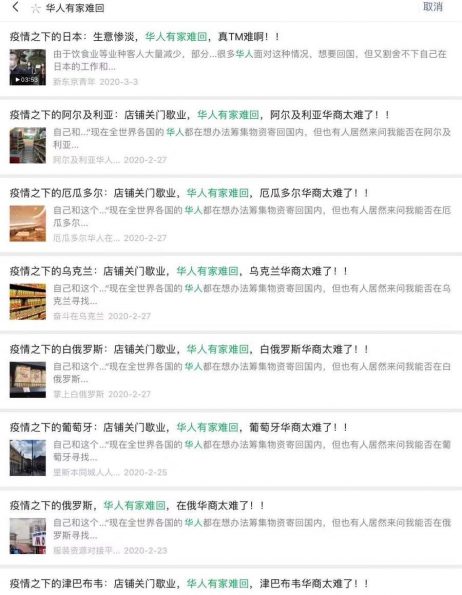 Fear spreads faster than the virus itself. While the disinformation has had little effect on Taiwan thus far, the potential threats posed by it cannot be underestimated. Moreover, this is not a problem unique to Taiwan; there has been an avalanche of articles exaggerating how severe COVID-19 outbreaks are in countries other than China. As the disinformation grew on Chinese social media platforms, it began to reach audiences abroad. However, by looking carefully at the texts one would find that they all follow the same template. For instance, one series of such articles all have the exact same headline, with only the specific country name changed: “The COVID-19 outbreak in [country name]: all the shops are shut down. Chinese people are not able to return home. Life is so hard for Chinese people in [country name]…” While WeChat announced that it has deleted almost 100 related articles on March 19, the thread had already caused widespread panic among Chinese nationals living in those countries mentioned. A worrying aspect is that, as these texts are in Chinese, it might be difficult for local authorities, who are not familiar with this language, to detect such panic-inciting messages.

In the midst of a health crisis, societies are often less stable and consequently more vulnerable to disinformation. As disinformation campaigns are likely to keep popping up, either online or offline, it seems that all countries affected by COVID-19 will suffer if their defense mechanisms against disinformation are not yet built. Besides having disease containment policies that have been lauded as among the best in the world, Taiwan’s resiliency to such tactics further highlights the significance of its participation in global efforts to fight virus-related falsehoods. Its thus-far successful experience may serve as a key step in making a potential solution viable and enlightening the rest of the world.

Yi-Ting Lien is the spokesperson for President Tsai Ing-wen’s re-election campaign office and a former staffer at the Presidential office of Taiwan. She has a master’s degree in political communications from the London School of Economics and focuses on issues related to Chinese influence and international relations.

Chinese Disinformation Operations: What Central and Eastern Europe Can Learn From Taiwan

By Alicja Bachulska and Lin Pu

The Taiwanese government and civil society’s tough, yet successful, battle against Chinese propaganda can be a lesson for democracies in the CEE region.

Recover Better Together: Taiwan Can Help

“Working together for the greater good is how the world will defeat COVID-19,” Taiwan’s foreign minister writes – and Taiwan must be a part of that effort.

By Marcin Jerzewski and Kuan-Ting Chen

Despite diplomatic exclusion, Taiwan has worked to provide wide-scale humanitarian assistance during the COVID-19 pandemic -- and beyond.

How Taiwan Battles the Coronavirus

Taiwan is living proof that control of an emerging virus can be achieved through science, technology, and democratic governance.

By Helena Aurellia and Gabriella Ienanto

The energy sector is in a good position to drive ASEAN's recovery and its transition to a greener economy.

Zoom conferencing won’t work if the Southeast Asian bloc is to tackle the big issues.

Observer Now, Beneficiary Later: China and the Unrest in Kazakhstan