Craft art has gained notoriety across the world in recent years, spotlighting several Asian craft techniques in both traditional and contemporary works of art. In anticipation of this year’s 17th edition of Collect: International Art Fair for Contemporary Craft and Design, which features several Asian galleries and artists, The Diplomat spoke with galleries that specialize in modern reinterpretations of traditional Asian craft art. While tradition stands at the forefront of East Asian crafts, many contemporary galleries emphasize the importance of technique and materials encapsulated in their respective traditions.

ATTA ‘N’ ATTA, an artspace in Thailand, focuses on contemporary art jewelry and material-based art objects. ATTA ‘N’ ATTA sees craft art as two qualities in balance: creativity and craftsmanship. According to gallerist Atty Tantivit, details are particularly important because jewelry is very “intimate” in that “it’s worn close to the body and is very tactile.” While jewelry was traditionally used as a decoration and a display of wealth, ATTA ‘N’ ATTA sees jewelry not as a secondary piece, but as the main actor with its own distinct self-expression. The tradition of jewelry-wearing is not particularly inspiring for the Bangkok-based artspace; their aesthetic to make jewelry more than just a decoration or add-on is underpinned by how contemporary pieces use traditional techniques and materials to “carry on the tradition of craft and turn a piece into an artifact.” 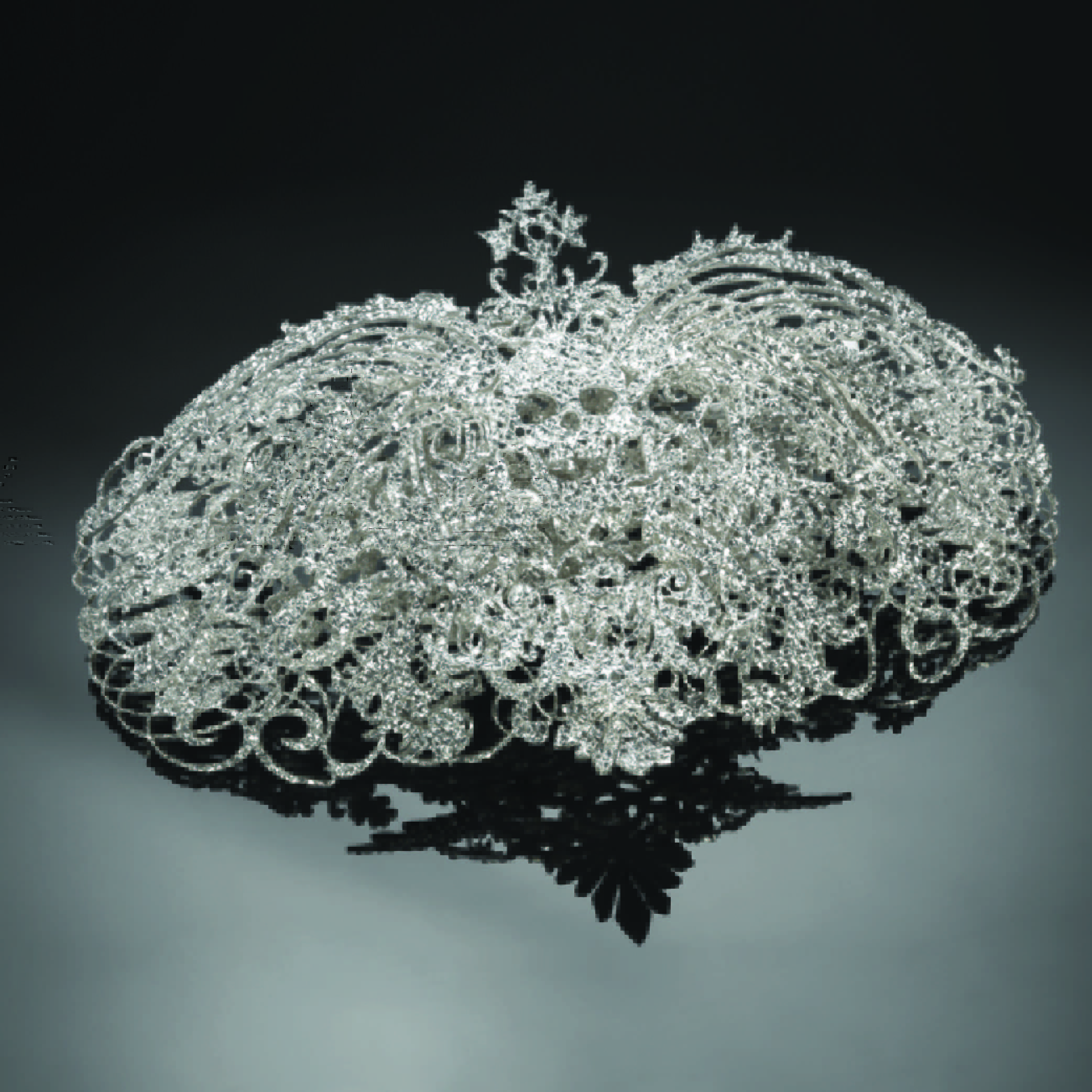 Ting-Ying Gallery, based in both the U.K. and mainland China, focuses on porcelain from Dehua, China. While other areas of China are known for their unique porcelain techniques, Peter Ting, one of Ting-Ying’s founders, fell in love with Dehua as “Dehua is the story of European porcelain.” The first piece of porcelain brought back to Europe by Marco Polo came from Dehua, with Polo disembarking from Qianzhou, the same port and city that Ting himself uses when he visits mainland China four times a year. Although Dehua’s porcelain has traditionally held specific uses — such as creating Buddha statues — Ting-Ying’s artists’ craftsmanship have both shaken up and expanded upon this tradition.

The gallery has a distinct focus on and love for porcelain made from Dehua’s “soft, jade-like clay.” Ting believes Dehua clay “has such an intrinsic quality that it just glows. When you find a gemstone, you don’t have to do much to it. In fact the more you do to it, the worse it becomes. That is Dehua clay — the clay brings its own qualities that I can’t stop.” As Ting describes, “Design is fully understanding the weight of the history that you carry on your shoulders, but not remaining a slave to tradition.” Above all, Ting believes in mastering the technique to let the material speak for itself: “People forget about the material. If you look at a material and what it does, it speaks to you. No matter how great a technician you are, the material talks and occupies its own space. When someone forces an idea onto a material, it inevitably suffers. You have to understand it to work with it and work your idea into it to bring out the best.” 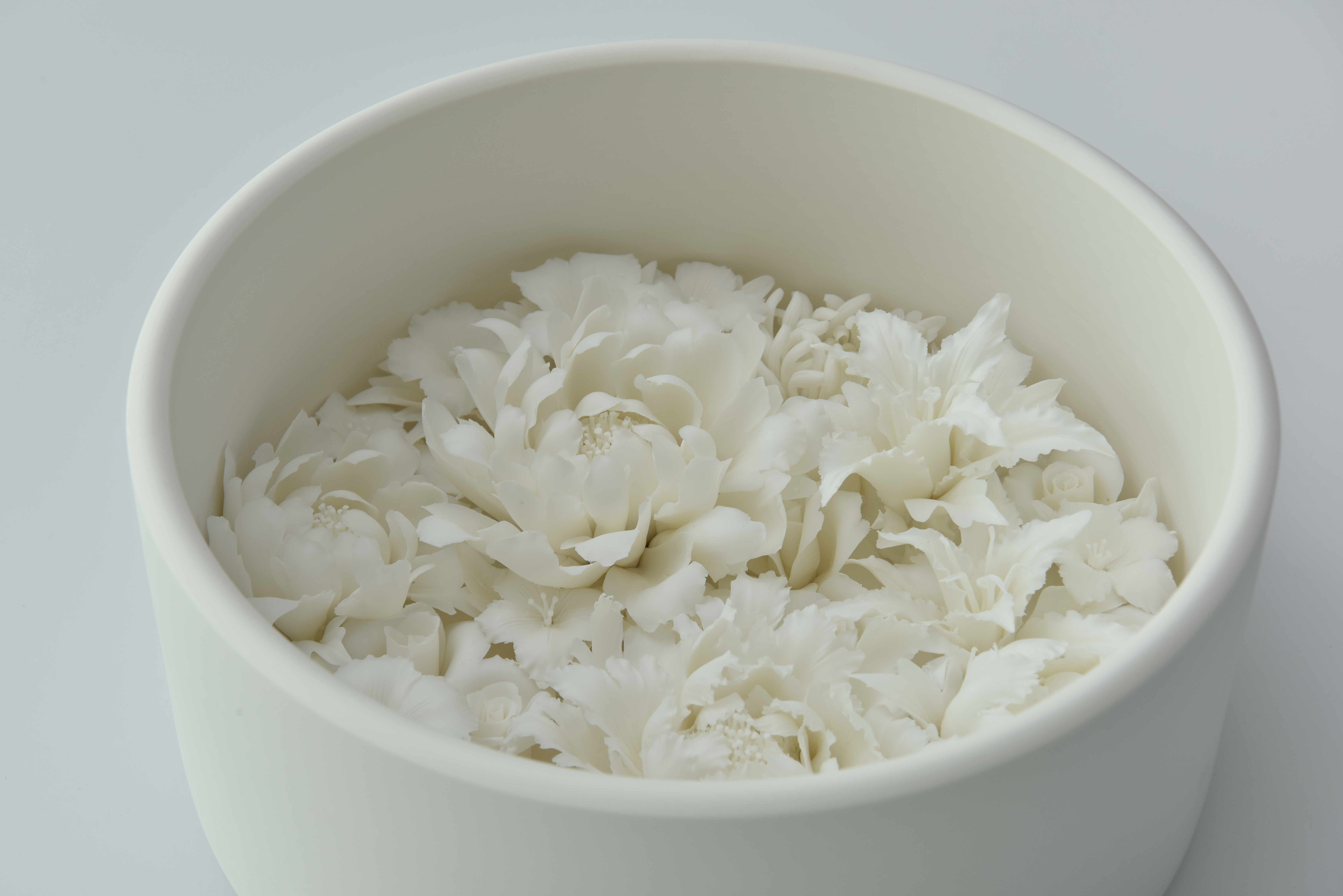 Lloyd Choi Gallery, a South Korean art gallery, focuses on Korean crafts, the Korean aesthetic and tradition, and Korean artists who are reinterpreting these traditions in their contemporary practice. Choi sees ceramics — and craft art, generally — as of particular value considering they are “tangible art,” created by human touch and hold imperfections that speak to their material properties. As Choi explains, “this tangibility to transfer humanity is the powerful quality in craft art.”

Lloyd Choi sees tradition and the contemporary manifest through material, technique, and even the artist’s mindset when creating a piece. An award-winning metal artist, Kim Hyun-ju, explores the ancient mother-of-pearl decoration technique to create non-decorative art of works. For this year’s Collect, Kim created a new series of minimalistic works that demonstrate the two unlike materials coming together. Choi Boram reinterprets classic blue and white pottery into abstract sculptures. An established artist named Yun Ju-cheol invented a technique of layering brushed white-slip called “Cheomjang,” which descends from 15th century techniques.

Even beyond reimagined material and technique, conceptual artist Kwak Hye-young captures what Choi identifies as “practicing tradition spiritually.” Kwak attempts to “record” rain in her ceramic works by placing purified porcelain boards in various locations to allow the rain to fall on the surface. As Choi describes, “This act evokes the Eastern philosophy of the ‘art of inaction,’ accepting the unpredictable outcome of her work akin to the mindful processes of the ancient masters.” 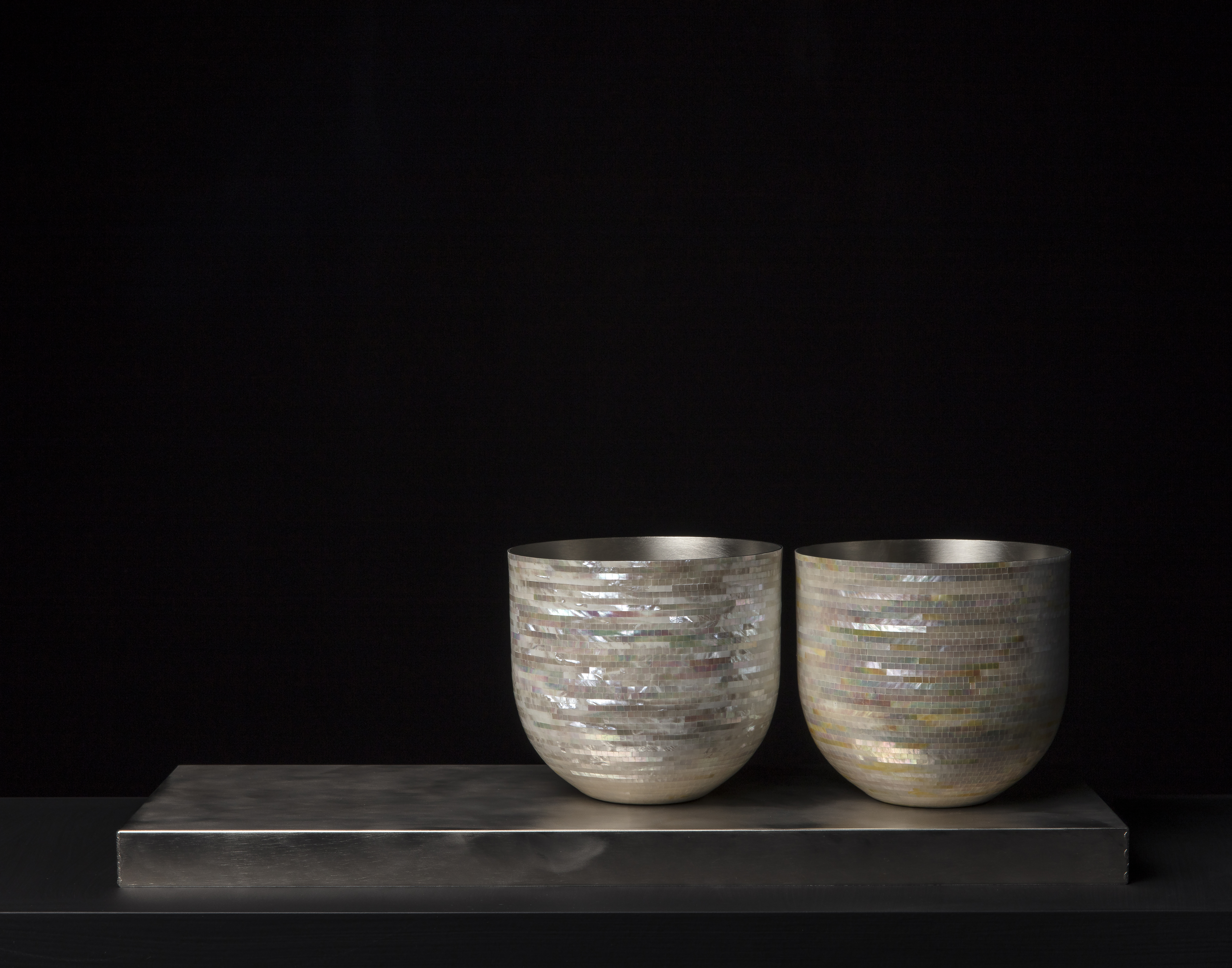 The Gallery by SOIL, based in Hong Kong, celebrates lacquer as a “miraculous, unsung” material and “an almost forgotten art form originating from China.” Lacquer, its origins dating back to the Chinese Warring States period almost 2,500 years ago, was further developed into unique styles in Japan, Korea, and Southeast Asian countries. SOIL “intentionally creates a dialogue between history and modern times as well as art and traditional crafts.” To preserve “these gorgeous handmade pieces and the painstaking techniques of making an item using natural lacquer,” SOIL does not reject the functional aspects of lacquer work given its history as “an element of elevated daily culture that we have seen for many centuries in Asian cultures.” At the same time, SOIL selects contemporary artists based on the inventive ways they embrace unusual materials and new methods to make lacquer. Displaying more traditional designs alongside contemporary artists’ lacquer objects and sculptures “makes for fascinating comparisons.” 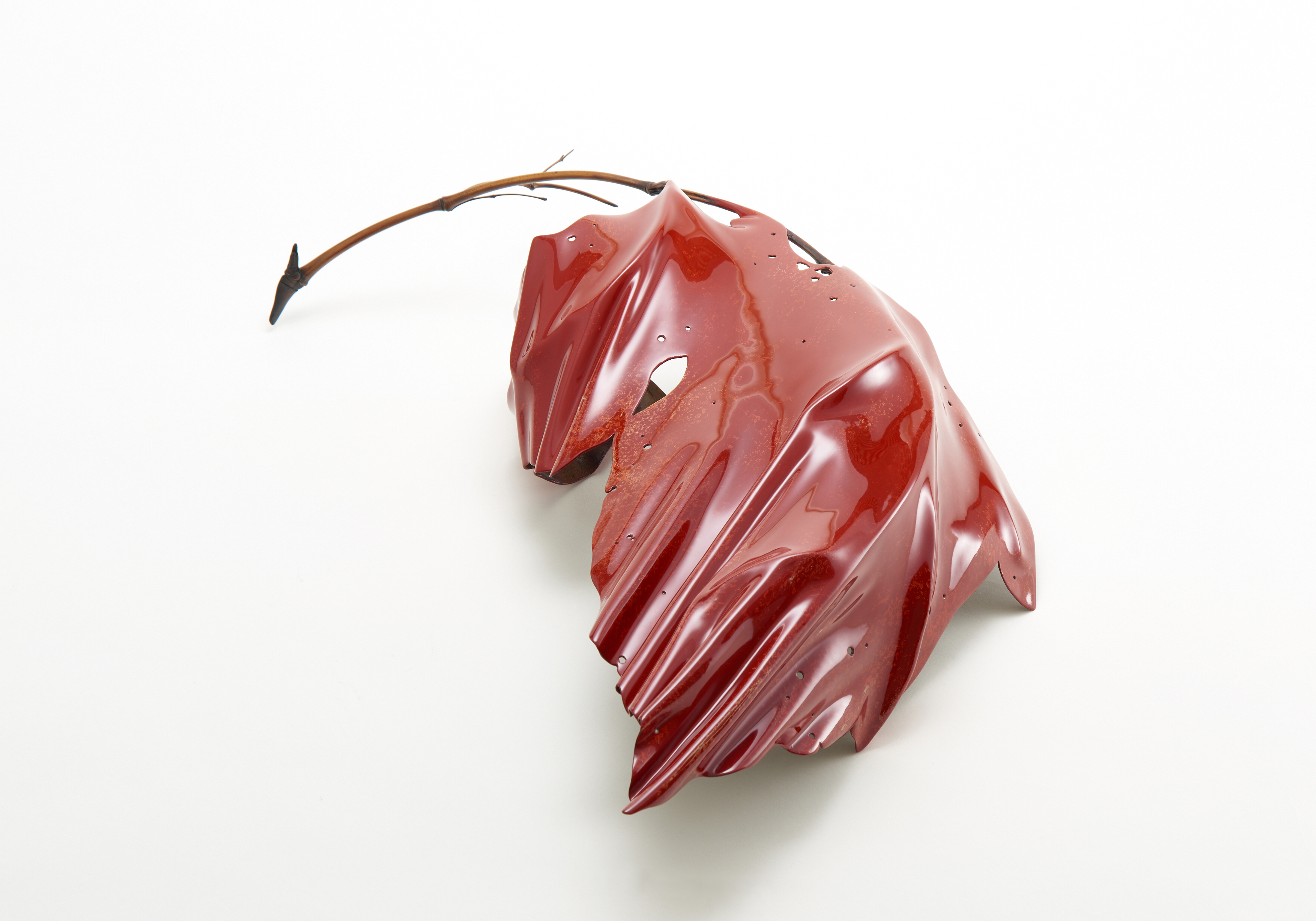 These craft art forms and the galleries promoting them continue to bridge the traditional East-West divide that extends beyond art. Atty Tantivit of ATTA ‘N’ ATTA comments that jewelry as craft art is still new in Southeast Asia, so domestic audiences are “more conservative in their buying habits and less courageous in carrying bold, expressive pieces.” To play into people’s curiosity, ATTA ‘N’ ATTA brings works by Western artists to Asia and brings Asia-Pacific artists’ work to the West to “challenge and expose the audience to works that they are not familiar with.”

Peter Ting of Ting-Ying Gallery, however, has not noticed a significant knowledge gap between Western and Eastern collectors. While he says it is difficult to speak about porcelain in the West given its many styles and looks, “the knowledge of the collector is the same in the West and the East.” Even though Ting appeals primarily to passion buyers who “stopped because an object spoke to them,” he is nonetheless frank about the nature of collecting: “whatever market and whatever collector, you will always have someone who wants to obtain something because it is valuable and it will maintain its value.”

Other galleries have primarily focused on introducing their work to Western audiences. Lloyd Choi has mainly presented Korean artists to Western audiences through international art fairs and pop-up exhibitions in Europe. Before founding Lloyd Choi Gallery, Choi worked for a Korean arts organization that presented at Collect. In its first year, it was the first presentation of Korean crafts to European collectors. Since then, Choi has noted that European collectors “have a great curiosity toward new cultures and their arts, and appreciate Korean craftsmanship with a big appetite for innovative ideas.”

Choi has noticed a distinct difference between Western and Eastern collectors, where Korean collectors “value practicality in craft and reject contemporary craft that mixes practicality and impracticality.” She traces this mentality to contemporary Korea’s nostalgia toward the Joseon dynasty era, a “pre-modern period when the Korean aesthetic was defined by ‘modesty, purity and humanity.’” This year, Lloyd Choi plans to cater to a domestic audience for the first time and will be in residence at Gallery O, NEUL in Jeju-do, South Korea.

These four galleries, representing four separate traditions from four separate regions, provide a small window into the deep traditions and long-standing history that comprises Asian craft. Modern artists have not only upheld and reinterpreted these traditions into contemporary pieces, but they also entrenched these forms in the global art scene. Whether through popularizing an art form beyond its Asian origins or through inspiring domestic audiences with a reimagined tradition, artists and galleries of Asian craft push the boundaries of tradition while simultaneously honoring it.

To see these, and other contemporary Asian galleries and their artists in action, check out Collect 2021 on Artsy.net starting February 26, 2021.

A taste of India's Kochi-Muziris Biennale.

Cultural treasures stolen from conflict zones continue to pop up for sale in the United States and elsewhere.