Chen Yixin has rapidly gone from strength to strength and is now emerging as the leading candidate for secretary of the Central Politics and Legal Affairs Commission in 2022, with even speculation of a path to Chinese Communist Party (CCP) general secretary in 2027. However, Chen’s path to Politburo promotion is complicated by paranoia over the ever-present threat of a palace coup.

Chen is heading up the 2021-2022 rectification campaign, a political purge along the lines of the first Xi administration’s “flies and tigers” campaign, which cleared political opposition for the second Xi term and allowed for greater institutional centralization of a variety of powers: legislative, internal security, party, military, and paramilitary. Chen, then, in 2021 is perhaps the most feared political entity in China domestic politics. The rhetoric surrounding this new rectification campaign has been stark: slogans like “remove the tumors” and “like Yan’an” echo the earliest of Mao Zedong’s Stalin-inspired political purges to ensure CCP loyalty, with the contemporary policy additions of “drive the blade in” and “scrape the bone clean.”

The terminology of the rectification and re-education campaign is couched in Confucian education and CCP rhetoric, a much harder sell to outside observers who could at least want to believe that the first purge under Xi Jinping was centered on countering the corruption that had been allowed to run wild from the Hu Jintao years. This rectification campaign is more direct in ensuring no one is left to challenge Xi, and whoever survives the scraping will be bone-hard.

Xi’s second term has restrengthened Politics and Legal Affairs Commission after the institution was defanged followed the Bo Xilai-Zhou Yongkang political accession struggle in 2012. Chen is currently secretary-general, a powerful Party administrative role akin to the less publicly visible roles of the various Leading Group office secretaries. He is likely to be promoted to the Politburo seat of secretary in 2022, replacing outgoing Guo Shengkun. This would effectively crown Chen internal security commissar with a wide range of policy tools for both internal and near abroad security deployment.

Chen has a long career as a fixer. He was placed in charge of the central COVID-19 response. At the height of the pandemic in 2020 there were rumors of internal CCP factions seeking to remove Xi from power. Chen was at that time sent in to Wuhan to shore up CCP control and reestablish confidence in the center, formally as the institutionally paired chair of Wuhan party secretary-Hubei deputy party secretary. There is no talk of Xi leaving power now, though, and the coming 2022-2027 period is being shaped by whoever survives the 2021-2022 campaign.

Chen’s 40-year CCP career and political path has been almost entirely within Zhejiang province. Chen sat in the Zhejiang Provincial Party Committee for eight years, covering roles from the Policy Research Office and Finance and Economics Leading Group. After mid-career Central Party School training Chen went to Jinhua city between 2011 and 2013 as party secretary, where he was responsible for development of Jinyi New Area, the location of Alibaba’s logistics center. Chen was then assigned to Wenzhou from 2013 to 2015, an affluent coastal business center and a testbed for many fiscal, financial, microfinance, credit rating, and SME development policies under Chen. Chen thus has strong policy experience in both post-industrial growth institutions as well as the shadow banking and debt default risks associated with the developed coastal cities.

After a series of promotions, including leading the Party Committee of the Wenzhou Military Subregion, Chen was fast-tracked to the center in 2015 as vice secretary of the Office of the Central Leading Group on Comprehensively Deepening Reform, a powerful but opaque party position close to the center of power. In early 2017 Chen was then assigned to a short stint of just over a year to the dual seat of Wuhan party secretary and Hubei Provincial Party Committee vice secretary – the same seat Ma Guoqiang was purged from in 2020 following the coronavirus political fallout. After Wuhan, Chen was brought back to the center in his current role as secretary-general of the Politics and Legal Affairs Commission.

In his party position in Hubei, Chen was also head of the Party Committee of the Wuhan military subdistrict, from whence Chen orchestrated the central policy task of reforming the military regional system in 2018, which resulted in reducing China’s domestic military security administrative districts from seven to five. The reform has significant cross-over with internal security given the changed institutional roles of both the People’s Armed Police and the China Coast Guard.

Chen is a prominent member of Xi’s next generation power base, the Zhijiang New Army faction, a function of complicated personal relationships and their connections to geographic space, public administration, and ultimately the Soviet institutions of governance that define domestic Chinese politics. It was as a result of this factional connection that Chen enjoyed a sudden parachute-promotion from Zhejiang directly to Xi’s Deepening Reform Leading Group, which brought Chen into the inner circle of CCP leadership. 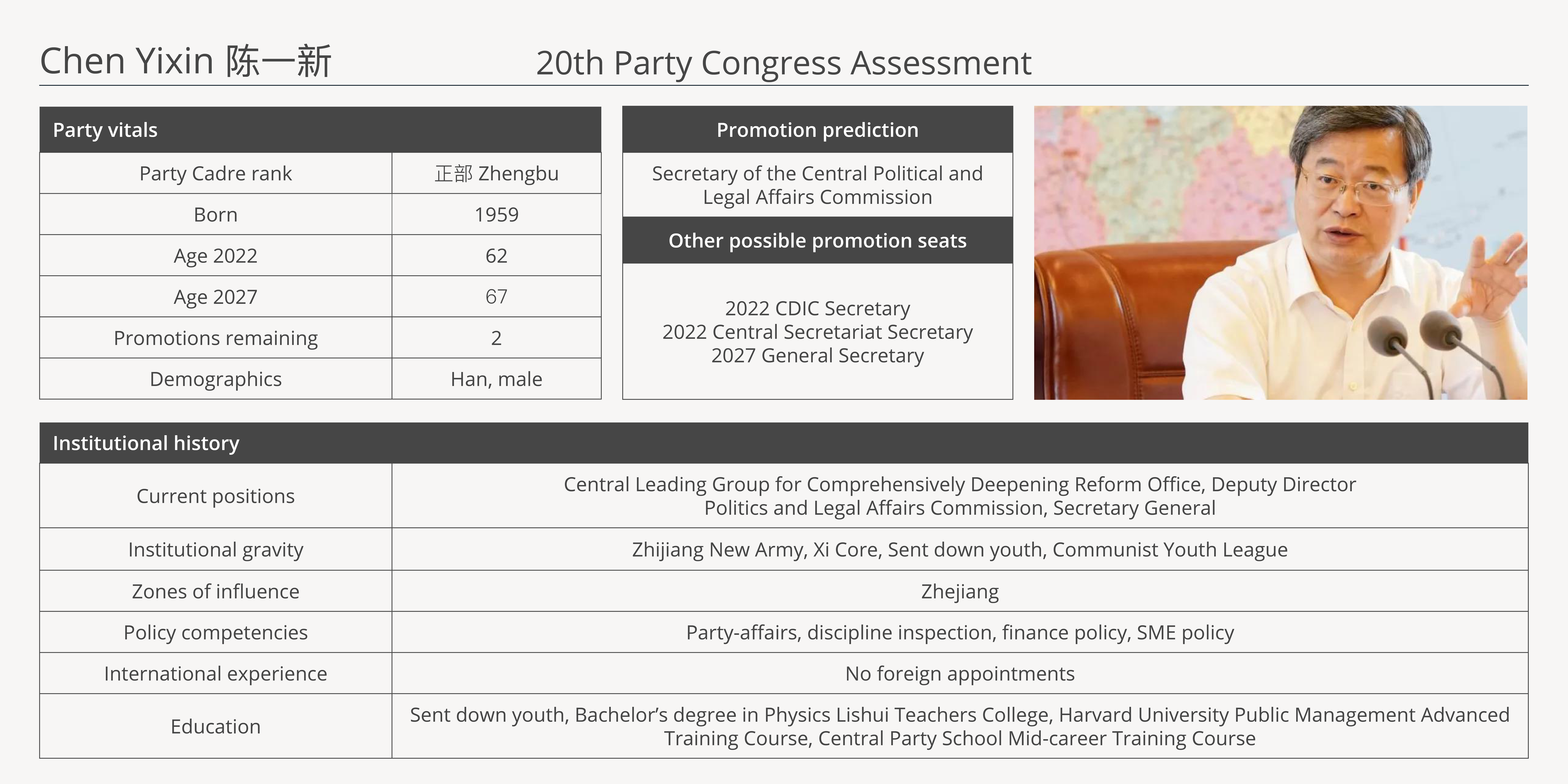 Chen is young enough to have two promotions left in his CCP career. Chen might be a long shot for the 2022 Politburo Standing Committee but he is almost certain to be promoted into the Politburo, most likely directly into the role of secretary of the Political and Legal Affairs Commission, replacing the Guo Shengkun and Zhao Kezhi partnership as the head of China domestic security policy. If Xi Jinping stays at the head of a loosely institutionalized war cabinet, then Chen could conceivably stay as political and legal affairs secretary for two administrations. If in more moderate scenarios Xi were to leave and a more liberal administration were to take over and change China’s direction in 2027, then Chen could be promoted into the Politburo Standing Committee in a friendly environment, or purged completely depending on both the excesses of his 2021-2022 Rectification Campaign and the mode of rule of the 2022-2027 Politburo. Chen is also a clear leading contender to replace Xi Jinping if a peaceful transition of power occurs within the New Left ruling faction and the continuity of a leader appointing a successor is followed.

In 2022 Chen could conceivably get a super promotion into the Politburo Standing Committee as Central Discipline Inspection Commission head, or as Central Secretariat Secretary, if Wang Huning moves up to premier, although the position of Political and Legal Affairs Commission secretary fits much more snugly. 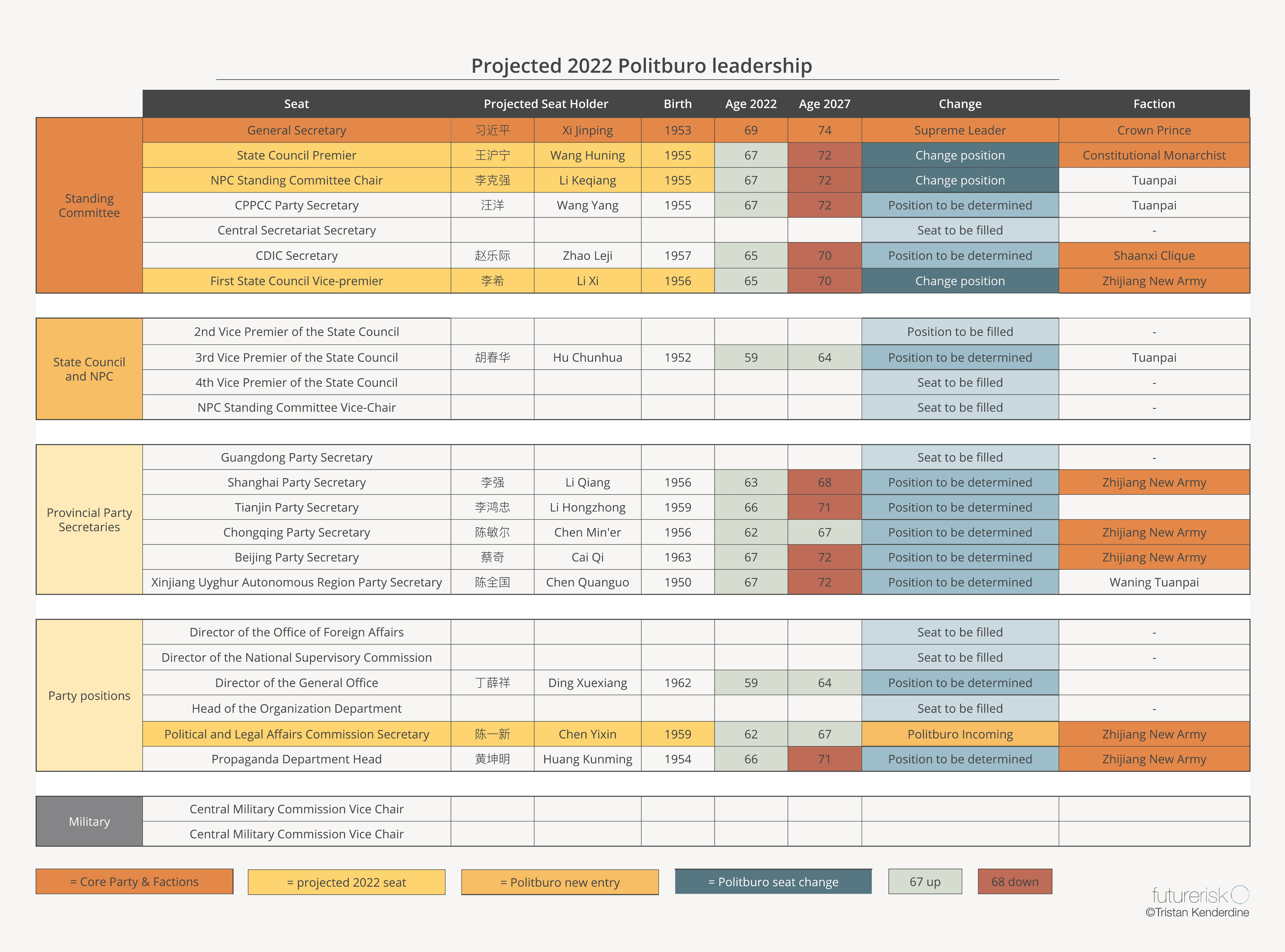 Chen is now a risen power in China domestic politics. Young, capable, determined, and smart, his personal success also tells the story of the deterioration of the party-political system in China. A cadre of Chen’s talent emerging onto the national stage in 2012 might have been expected to put a problem-solving mind to work on policy solutions such as climate change, energy policy, international finance, health, or poverty alleviation. Instead, in 2021 we witness one of the best and brightest in China’s political system emerging into an internal security commissar role with the power and mandate to cut down the political opponents of the CCP.