Infamous for iron-fisted policies directed at China’s ethnic and religious minority border regions in Tibet and Xinjiang, Chen Quanguo could have already been promoted sooner and is likely in line for a powerful promotion in 2022. Having honed his ethnic affairs skills in Tibet, Chen was deployed to Xinjiang to affirm Chinese Communist Party supremacy over population centers ahead of their development into import hubs for the Belt and Road policy. Often characterized by Western media as a campaign against Uyghur Muslims, the Xinjiang policy is not anti-Muslim at its core but rather is more acutely a campaign against ethnic minorities. The same policy principles have been deployed against Buddhist Tibet and Inner Mongolia, and in Xinjiang any notional appeal to a rhetorical reactionary response to Uyghur Islamic separatism should be dispelled by ethnic Kazakhs, Kyrgyz, and others being caught up in the same campaign.

Xinjiang governance has been more akin to a praetorate than a party position. However, while Xinjiang is a province with looser governance structures, it has perhaps the most clearly developed provincial policy architecture. Chen inherited the policy structures of the Second Central Xinjiang Work Symposium and then led through the third such symposium, which was held in September 2020. This provided a new governance framework through which to set the policy agenda for the coming period. These Xinjiang work symposia are haphazard policy engagements, not formalized into institutional time periods like the five-year plans in economic guidance or ten-year term limits in state governance positions. The previous Second Central Xinjiang Work Symposium, which was meant to run from 2014-2018, was simply extended without formal policy development and we had been expecting the Third Symposium for another two years after that. And after two successful tours of ethnic duty repressing campaigns – first in Tibet, followed by his current more high-profile position in Xinjiang – Chen is likely to be rewarded with an easy Beijing posting after the equivalent of a hostile foreign affairs posting.

Common amongst the current cohort of Central Party leaders, Chen’s early career was marked by an ability to avoid the tail-end of the Cultural Revolution. All the current generation of ministerial level cadres mostly had the beginnings of their education delayed, but largely avoided any of the real personal destruction of the period. Chen survived his transition into adulthood not through an early party appointment but through military service, joining the First Army, Third Division Artillery Regiment. The First Army is a core Eastern Theater Command with a long history unbroken until the 2017 military region reorganization. Chen later built worker credentials in an auto parts factory, before studying political economy and then beginning a CCP career.

Chen’s party experiences oscillated between executive branch positions and the administrative branch. Chen first took an executive party role in the Zhumadian Prefectural Committee, then entered the administrative stream in the Policy Research Office in the same prefecture for three years, then went back to party executive in Suiping County for four years. He was later concurrently a member of the Pingdingshan Municipal Party Committee Standing Committee (executive) and director of Henan Province Organization Department (administrative). He then took an easy mayoral position in Luohe while he studied for an MBA degree in Wuhan, and then took a state appointment as vice governor of Henan Province for two years. He then sat around the top of Henan party positions on the Provincial Party Committee and Organization Department while studying for a Ph.D. in management, after which his political ascent to the central CCP began.

This combination of executive and administrative functionary makes him a perfect cadre to staff higher levels of party organs and the Politburo as well as a trustworthy isolated individual operator in the borderland provincial positions he later took in Tibet and Xinjiang. Chen was governor of Hebei, a state position, for three years, before being moved back to executive as Tibet party secretary for five years. And from 2016 he was moved to Xinjiang as party secretary and first political commissar of the Xinjiang Production and Construction Corps. Chen was formally inducted into the 25-member Politburo in 2017, where he will have been for five years come the 2022 Party Congress. 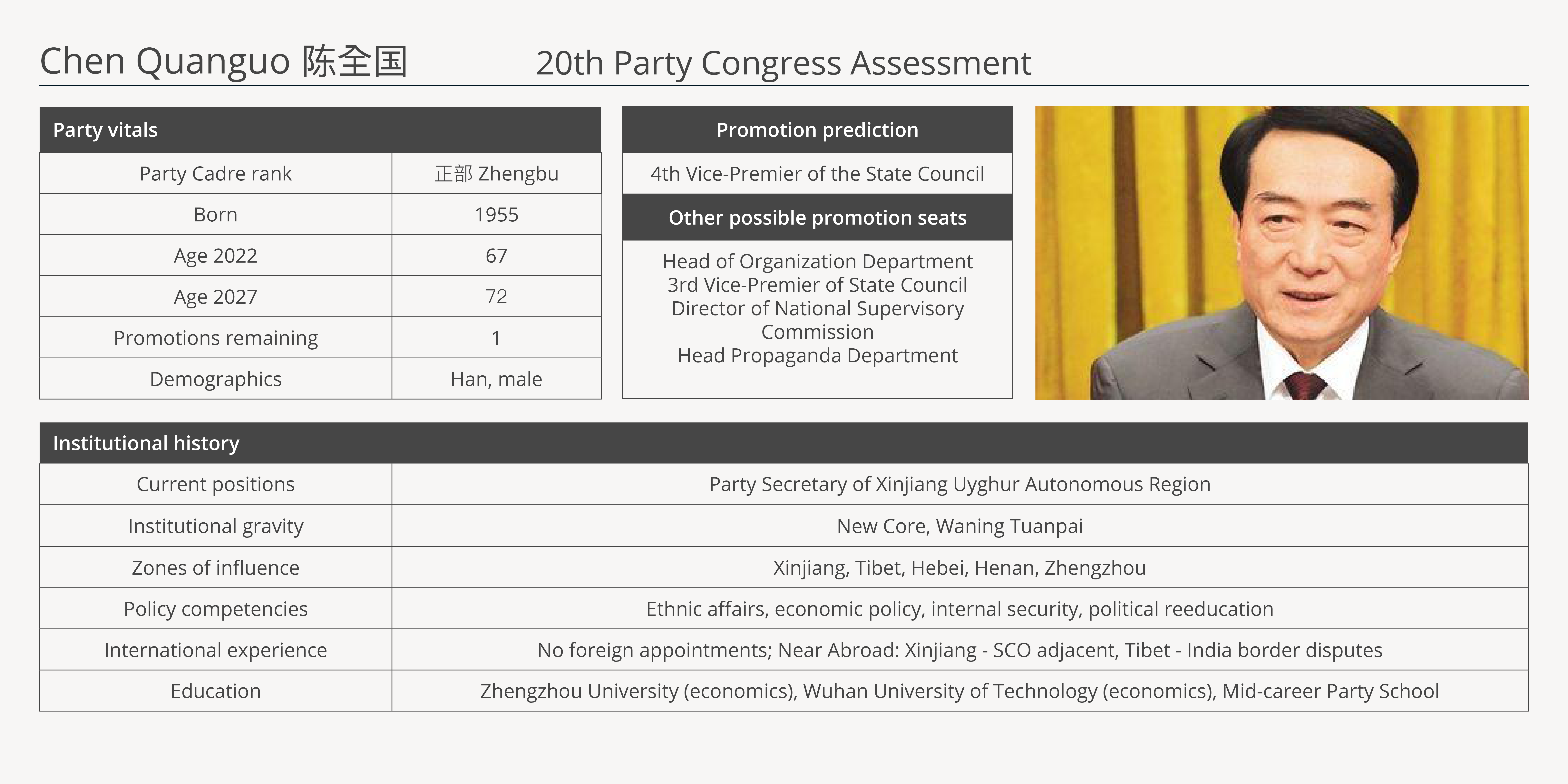 Chen is almost certain to gain a promotion back to the center but only has an outside chance to climb into one of the Politburo Standing Committee seats. Chen could go back to CCP administrative positions such as head of the Organization Department, Propaganda Department, or of the National Supervisory Commission. He is already a Politburo member meaning a ministerial-level appointment to run the United Front Work Department would be a demotion. While party positions would suit Chen’s character and career better, Xi has spent two terms stacking the state positions with more party-minded acolytes. Thus, while Chen could move sideways into one of the CCP positions, it is more likely he will go into a state position. The obvious state positions he could take would be the third or fourth vice premier of the State Council. A higher promotion than third vice premier is unlikely given Chen’s lack of experience across other policy areas.

Contemporary policy and governance in Xinjiang and the CCP executives who operate there are driven by what the party wants from the jurisdiction and the public administration realities mean that party executives must realize quantifiable policy goals. To take the known risk of Western media backlash against the Xinjiang concentration camps, there must also be a known party goal worth taking this risk for. Xinjiang, Tibet, Inner Mongolia, and Ningxia were left alone as a CCP policy testing grounds for decades. Now there is a major geoeconomic use for Xinjiang and both provincial governance and policy is changing. 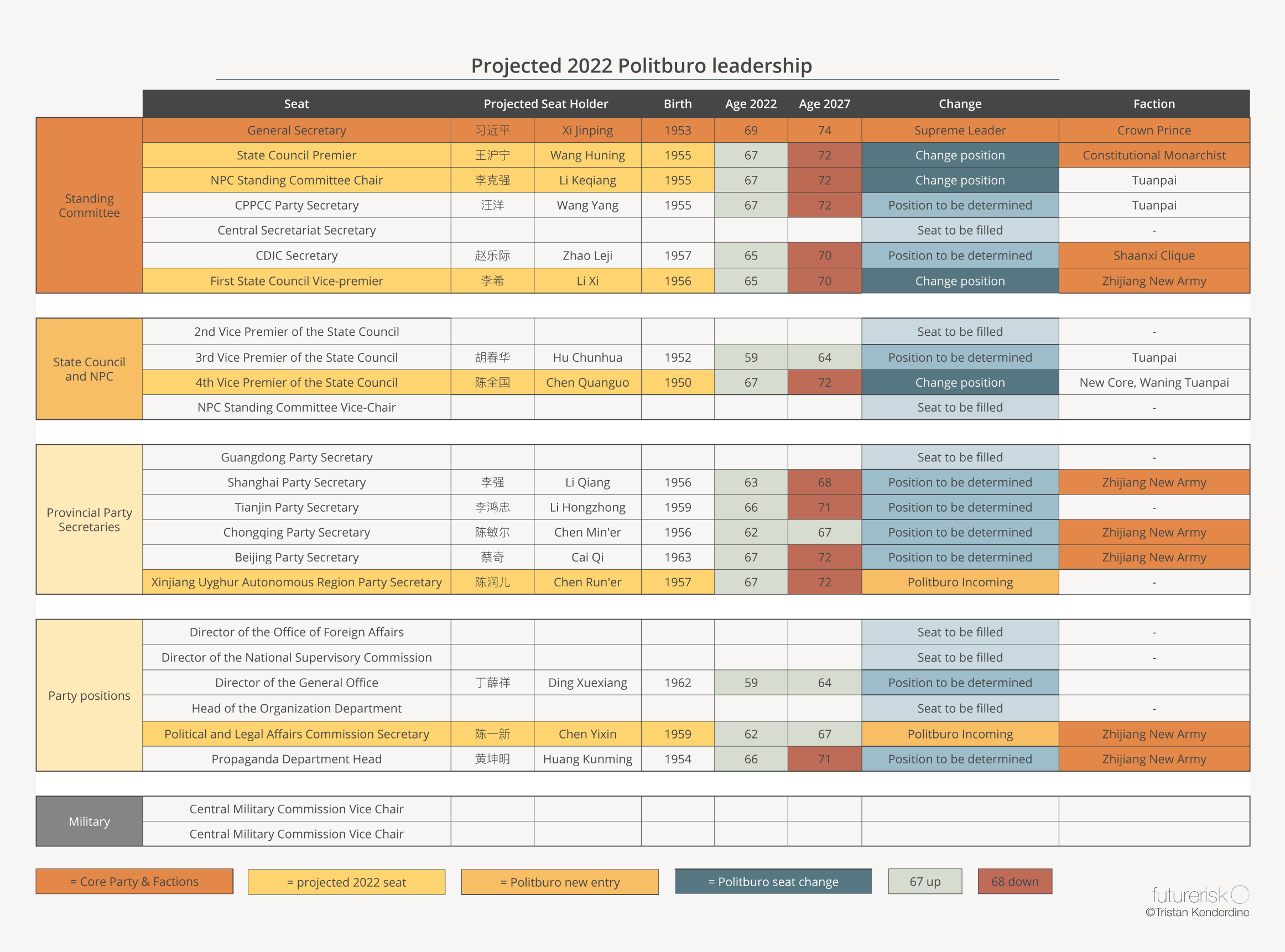 Whomever inherits the Xinjiang party secretary position from Chen though will walk into a job mostly complete, with a hardline policy prescription already enacted. The policy inheritance for the party is now consolidation rather than policy innovation, and the politician who enabled this change will be promoted into the safety of the center.

A low flier on a newly established institutional trajectory toward ethnic affairs governance, Chen Run’er could replace the infamous Chen Quanguo at the 2022 CCP Congress.