Chen Min’er rose to international prominence in the leadup to the 19th Congress of the Chinese Communist Party (CCP) in 2017. With the institutionalized presumption that General Secretary Xi Jinping would choose a successor at the mid-point of his administration, Chen looked a good candidate for Xi to tip as the next leader. It was not to be, as Xi bucked tradition and refrained from tapping a leader-in-waiting.

Throughout the 2017-2022 period rumors and political analysis alike have variously put Chen in and out of contention for Politburo Standing Committee in 2022. If Wang Huning moves positions within the Politburo Standing Committee in 2022, Chen would be a safe bet to move up into the vacated Central Secretariat secretary position. Chen would be political overkill as director of the Organization Department or the General Office, though he could be a solid pick for a higher-ranked State Council vice minister if Xi were to stack the state positions with party stalwarts.

Chen is another cadre who was protected from falling into the end of the Cultural Revolution. He stepped through teacher’s college and straight into the Zhejiang provincial Party School. At both institutions he took a highly political focus, ending university as the director of the college’s propaganda department, and at Party School staying on an extra year to teach political theory. Both are indications of thoroughness and trust, but also of pursuing a goal higher than his current station.

Since then, Chen had a nearly perfect CCP political career, working on core party functions and being promoting by jumping ranks through essentially repeating the same patterns in successively higher administrative areas. His administrative testing grounds were Shaoxing county, Ningbo municipality, and Zhejiang province. In Shaoxing, Chen rose successively through propaganda, vice secretary, and then party secretary. He then did the mid-career Central Party School training in law, and rose through the party secretary positions in Ningbo, where he also took on responsibility as news chief. At Zhejiang provincial level, Chen started again in propaganda, then worked with Xi Jinping in the Zhejiang Provincial Standing Committee for five years. Once given ministerial level cadre rank and promoted to run the small, political risk-free but increasingly techno-strategic province of Guizhou, Chen was already a made-man in the CCP.

China’s provincial governors and party secretaries preside over provinces with economic status as large as European countries. Conventional economic growth targets were for over a decade a key metric in political competence. In Xi’s “New Era,” a more multifaceted value system is developing. This is not simply a case of market retreat and a return to CCP politics, but rather introducing additional metrics of social and economic progress into definitions of modernity. One of these is the science-technology innovation and manufacturing nexus seen as so crucial to China’s rise through the 2020s. The province of Guizhou has been pivotal in this techno-structural development.

Guizhou connections began to emerge into national CCP discourse from the 18th Party Congress. Going into the 19th Party Congress in 2017, there was the clear emergence of the Zhijiang New Army as a new institutionalization of relationship politics, but the sketches were also already there of a secondary clique, centered on Guizhou. The emergence of this “Guizhou Connect” is not simply a secondary political faction of Xi’s New Core. Guizhou is home to much science-technology, high technology, techno-industrial, and military-industrial development. Guizhou thus constitutes a modern-day “Third Front” of techno-industrial projects of key importance to the national development strategy. Having a tight-knit group of CCP stalwarts in place in Guizhou represents a cross of national security, party-building, and future-focused techno-industrial policy for the 2020s, with the superficial political face of economic development and poverty alleviation in reality forming distant policy priorities.

Current Guizhou Connect factionites emerging onto the national stage include Chen Min’er, Shen Yiqin, Wang Xiaodong, and Chen Gang, all of whom are likely to be important players in the 2022-2032 period with at least two promotions remaining under age restrictions. Guizhou Connect elders include Li Zhanshu and Zhao Kezhi, who are expected to retire from the Politburo and State Council, respectively.

Chen is now the highest ranking member of both key New Left Party factions, the Zhijiang New Army and the Guizhou Connect. This makes him powerful in both controlling the future of the two factions, but also serving as a bridge between the differences in political form that each generation represents. 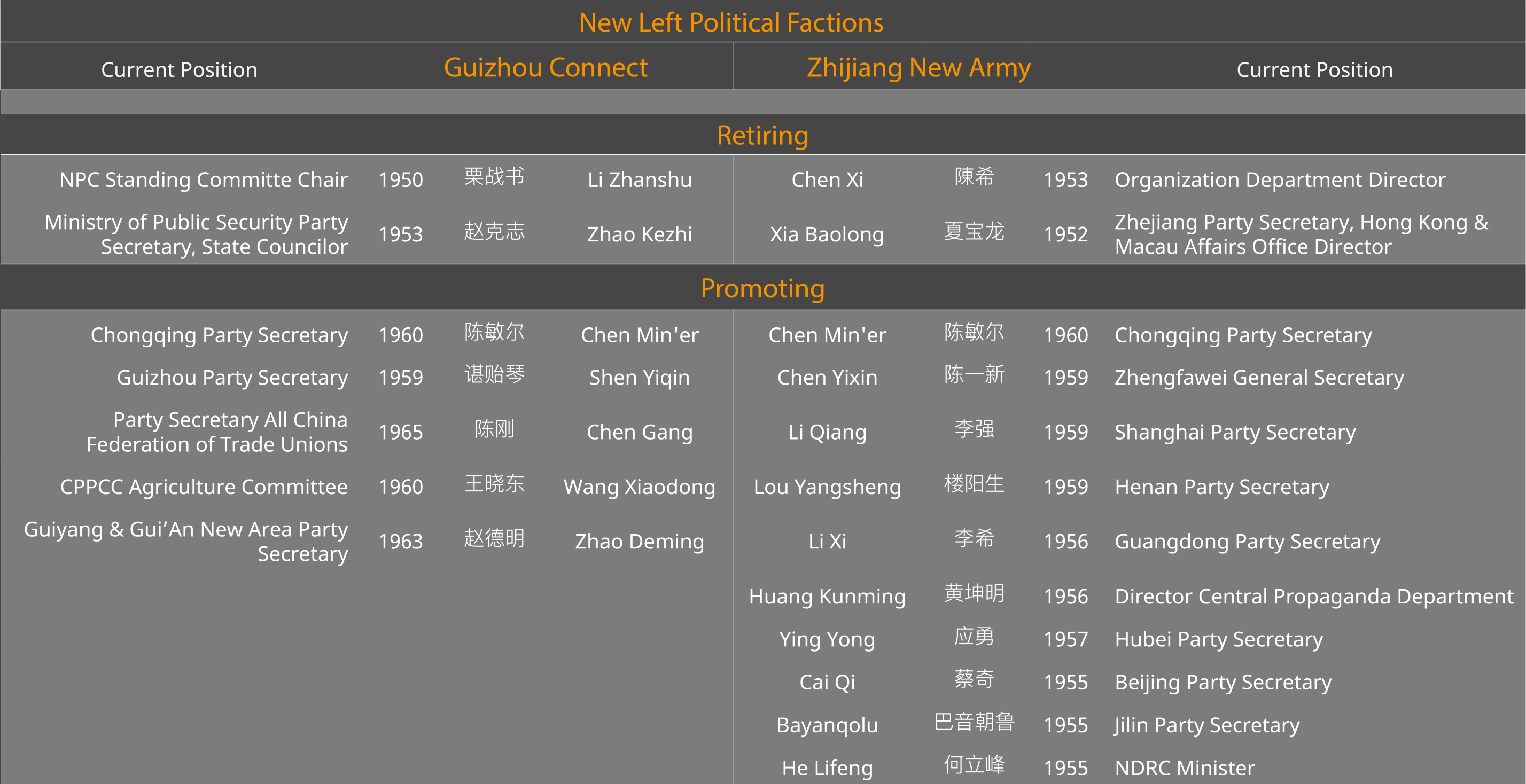 Cadres struggle to get close to a position of national power at ministerial cadre level before they are too old. For most, a ministerial-level appointment is the last grab in their career. Chen had this pressure taken off him already in 2012-13 when he stepped into the governor of Guizhou position. Five years of political network building and then five years as Chongqing party secretary means he is sitting at the table already.

Chen was given his place at such a young age in part to counter the CCP’s right-faction picks of Hu Chunhua and Sun Zhengcai under Li Keqiang. Sun was taken down in 2017, but Li would outlast Xi if institutional rules were followed, and Hu was positioned early to be a to rightist leadership candidate. Chen’s early rise has meant he could afford to focus on national politicking over his own career. He now has a chance to be leading political factions behind the scenes and determining the political path of China in the 2020s.

Chen is currently Chongqing party secretary, with the only meaningful promotion to a central position being to the Politburo Standing Committee. Likely to take the Central Secretariat secretary position if Wang Huning is promoted, Chen would also serve well in Discipline Inspection. Chen would make an excellent General Office secretary, but this would essentially be a demotion when the Standing Committee is in play. While ideas of him being China’s supreme leader one day have largely fizzled out, there was loose talk that Chen could be made state president while Xi remains on as CCP general secretary. This would fit the personal politics well, but would still leave the Standing Committee seat open. If Xi were no longer in power after 2022, Chen Min’er would likely be the first to be purged by any new leadership. 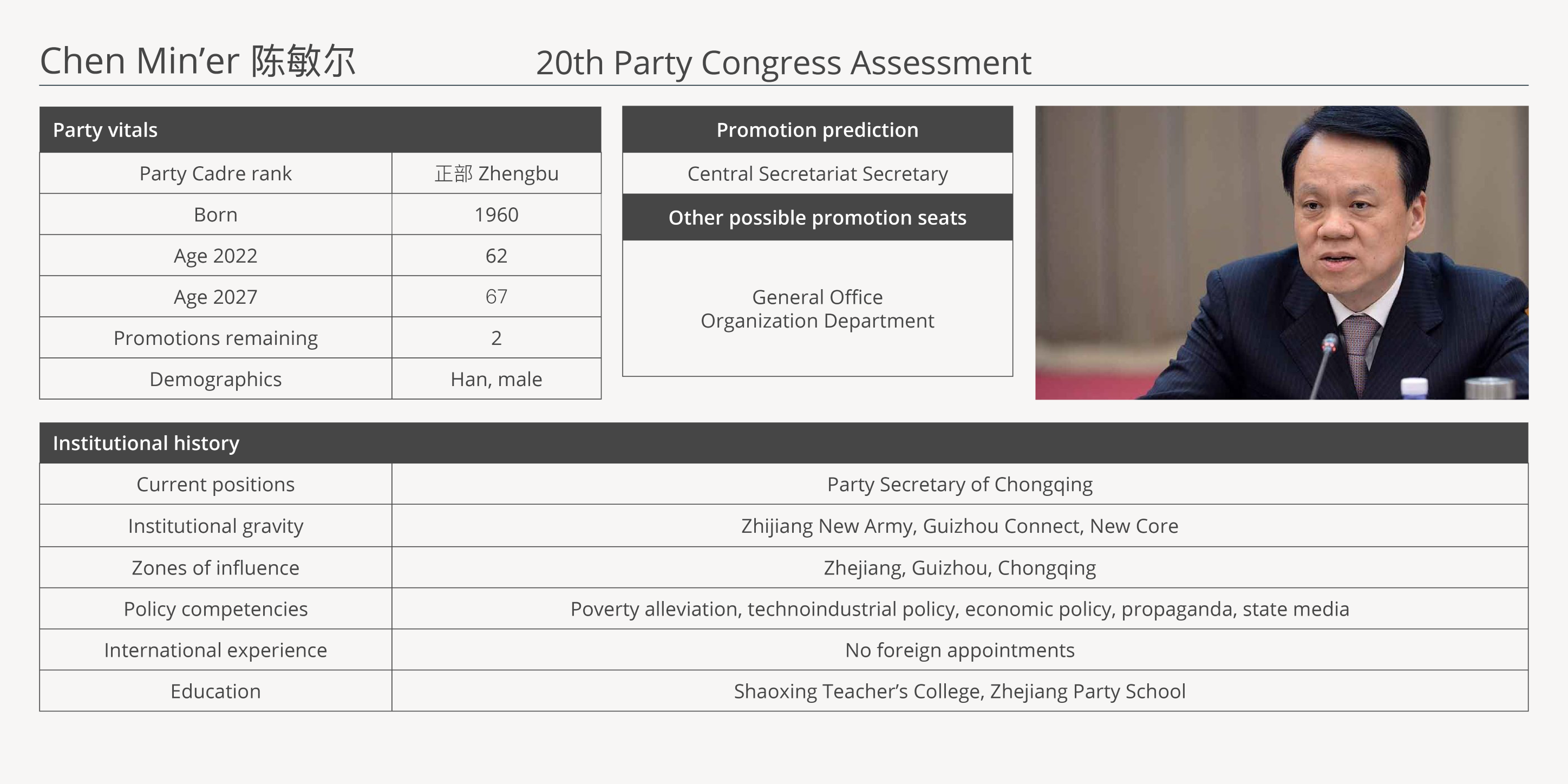 Chen represents the future institutional development of Xi’s New Left movement beyond 2022. With institutionalized 10 year terms, we expect a reset and reguidance of CCP ideologies. Even if 2022-2027 is to be a third Xi term, all other cadres will likely still develop within the institutionalized five-year term structures and other party limitations. This means younger cadres will be disjointed from the New Left old guard and will bring new ideas and directions to the New Left movement beyond the leadership of Xi Jinping. This could result in a more extreme left as incoming cadres try to please Xi by being ultra-left. Alternatively, new cadres taking a softer approach within a faction entrenched in power could pull the CCP back closer to center-left. In addition, more polarized internal power struggles could see a variation of the old left-against-rightists dynamic play out again in the 2020s.

Watching the development of the Guizhou Connect will be key to determining the internal policy and political positions of China’s cadres. Chen Min’er’s leadership over this new group could determine many upcoming internal political struggles within the CCP.

Who Will Be China’s Next Premier?

Because of the focus on what Xi will do in 2022, an important question has been ignored: who will take Li Keqiang’s place?