Emerging from the Guizhou Connect political faction, a southwestern China clique with many crossovers with the Zhijiang New Army, Shen Yiqin is the most obvious female candidate for promotion to the Politburo in 2022. Shen’s party-building experience and fast-track into provincial-level cadre leadership positions point to her ascending into the Politburo in 2022.

Before 2002, there had been no women in the Chinese Communist Party (CCP) Politburo since the 1982 12th Central Committee, where Kang Keqing served on a then 29-member Politburo. Having at least one woman on the Politburo has been institutionalized as rule since 2002, though many rules are now being abandoned. Shen is also ethnolinguistically Bai, a southwest China minority group, adding value to her identity politics at the national level. Representation of women and ethnic groups are both important promotion factors in elite CCP politics. Both other female leaders at the provincial leadership level are also ethnic minorities.

Shen Yiqin’s trajectory is interesting from a party cadre institutional perspective, as she rose mostly through the non-leadership promotion track. Much of her career was in education, research, and party-building, positions in administration and research with a parallel cadre rank. There are five main streams of the party cadre hierarchy: party, state, administrative, legal, and scholar. Promotion along this scholar track can lead to party positions in history, ideology, propaganda, and organization, but they rarely result in a clean transition in executive political power. Wang Huning is the archetype for this type of promotion path, but Shen has been fast-tracked from non-leadership into serving as governor of her native Guizhou province, opening a range of promotion opportunities in 2022.

Unlike many other candidates in this age range, Shen did not avoid the tail-end of the Cultural Revolution and was a “sent down youth” for a year before entering Guizhou University, where she studied history. Shen then went straight into the graduate school at the provincial Guizhou Party School, teaching and researching party history and party-building. Party schools are graduate schools of governance, political science, political economy, and party history. The Central party school system is a political career-maker and an essential gateway to provincial-level cadre governance positions.

In her provincial career, Shen has consistently held multiple posts across the spectrum of academic, party, and governance positions. At the apex of her Guizhou academic career, Shen has been both party secretary of the Guizhou Party School and chair of the Guizhou Federation of Social Sciences, solidifying her at the top of the party school apparatus as the membrane between party school and party in Guizhou. Shen also went to Central Party School three times: for a full-year course in 1998-1999; for mid-career training in 2007 in economics, presumably to broaden her policy competencies; and then again in 2009 for the ministerial-level cadre training. In between she did the requisite subprovincial administration vice party secretary positions, at Qiannan and then Tongren prefectures, both times for under two years as she quickly returned to provincial level governance. Shen’s provincial career-making position was as director of the Guizhou Propaganda Department, which she held for five years from 2007-2012 before beginning her ascent through top-level governance positions.

A provincial career in propaganda and the party school could have been the terminus of her career. But in 2009 though she completed the ministerial-level Central Party School mid-career course. This provincial cadre level mid-career training is the funnel through which national-level leaders emerge. By 2012 Shen was vice governor of Guizhou, by 2015 a vice party secretary of the Guizhou Political and Legal Affairs Commission, and successively in 2018 and 2020 Shen ascended to first governor and then party secretary of Guizhou.

Shen’s direct rise was likely sped up close to the 2022 promotion round, where she is now in excellent position to assume a role in Politburo. From there, she can defend core party interests against any possible liberal-right resurgence in 2027. 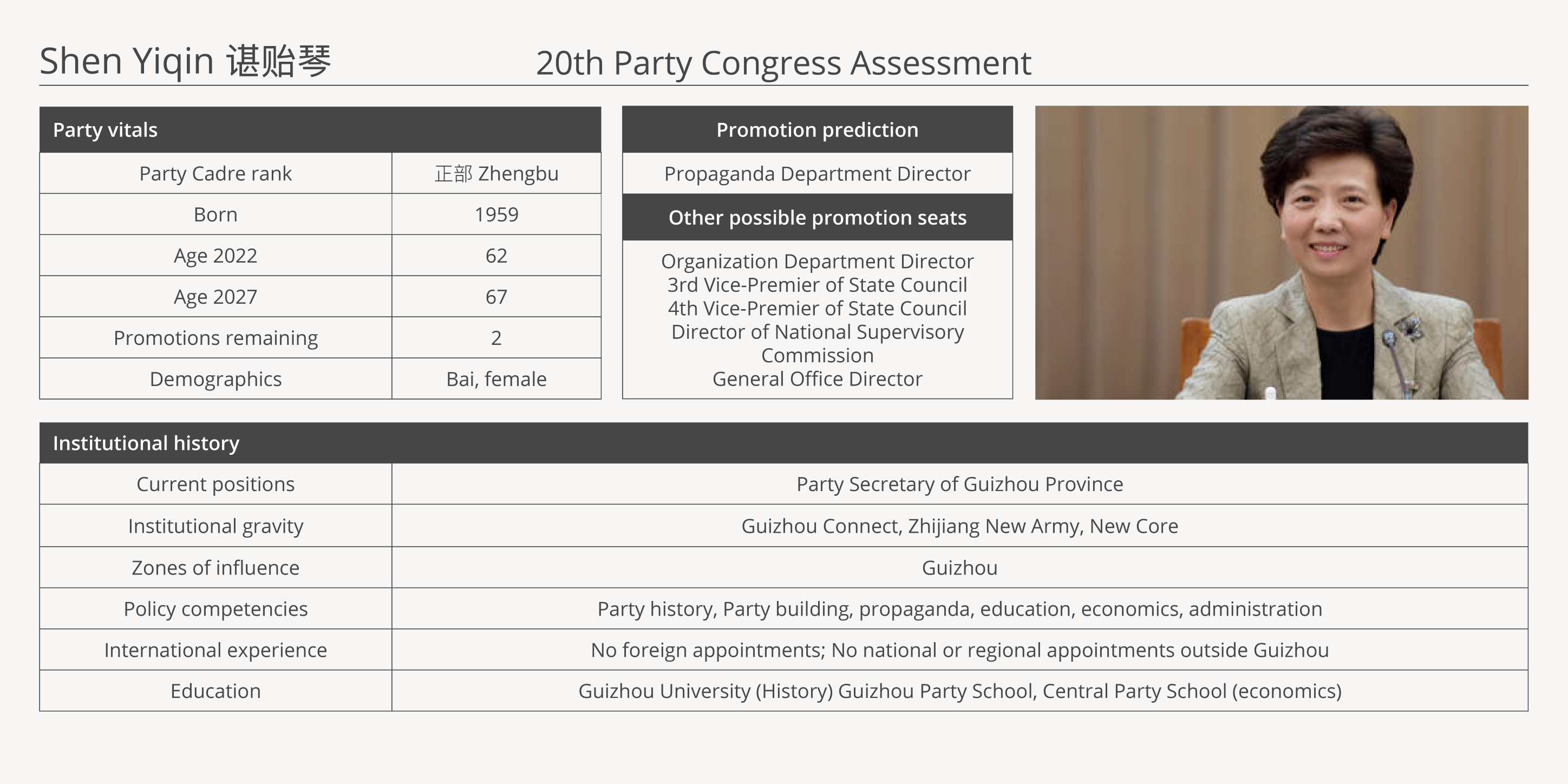 Shen is well suited to take one of the six party positions in 20th Central Committee Politburo. She could be director of propaganda, the National Supervisory Commission, the General Office, or the Organization Department. Propaganda would be most likely, with Organization more likely to go to someone with more national and Beijing experience. Though less likely, Shen also qualifies for a state position, perhaps as third or fourth vice minister. However, her career trajectory conforms more to a party position in the Politburo. As director of propaganda, Shen could fit well into a restrengthened nexus of the six party organ seats on the Politburo.

Her obvious weaknesses are her lack of foreign policy experience, Beijing national experience or economic management. But within the institutional nexus of the party positions, Shen should be a comfortable and confident leader behind the state policy scenes. It would be easy to imagine her forming close working relationships with Chen Quanguo, who has vast experience in Organization Departments, and Chen Yixin in the Central Political and Legal Affairs Commission where Shen has provincial experience.

Chen Xi is retiring, meaning that dean of the Central Party School is an additional position possibly open to Shen. Central Party School dean is no longer limited to a Standing Committee member and confers no status within the Politburo, but would be an excellent career highlight for Shen, and would give the Politburo a solid party ideology professor who could lead party-building for the 2020s. 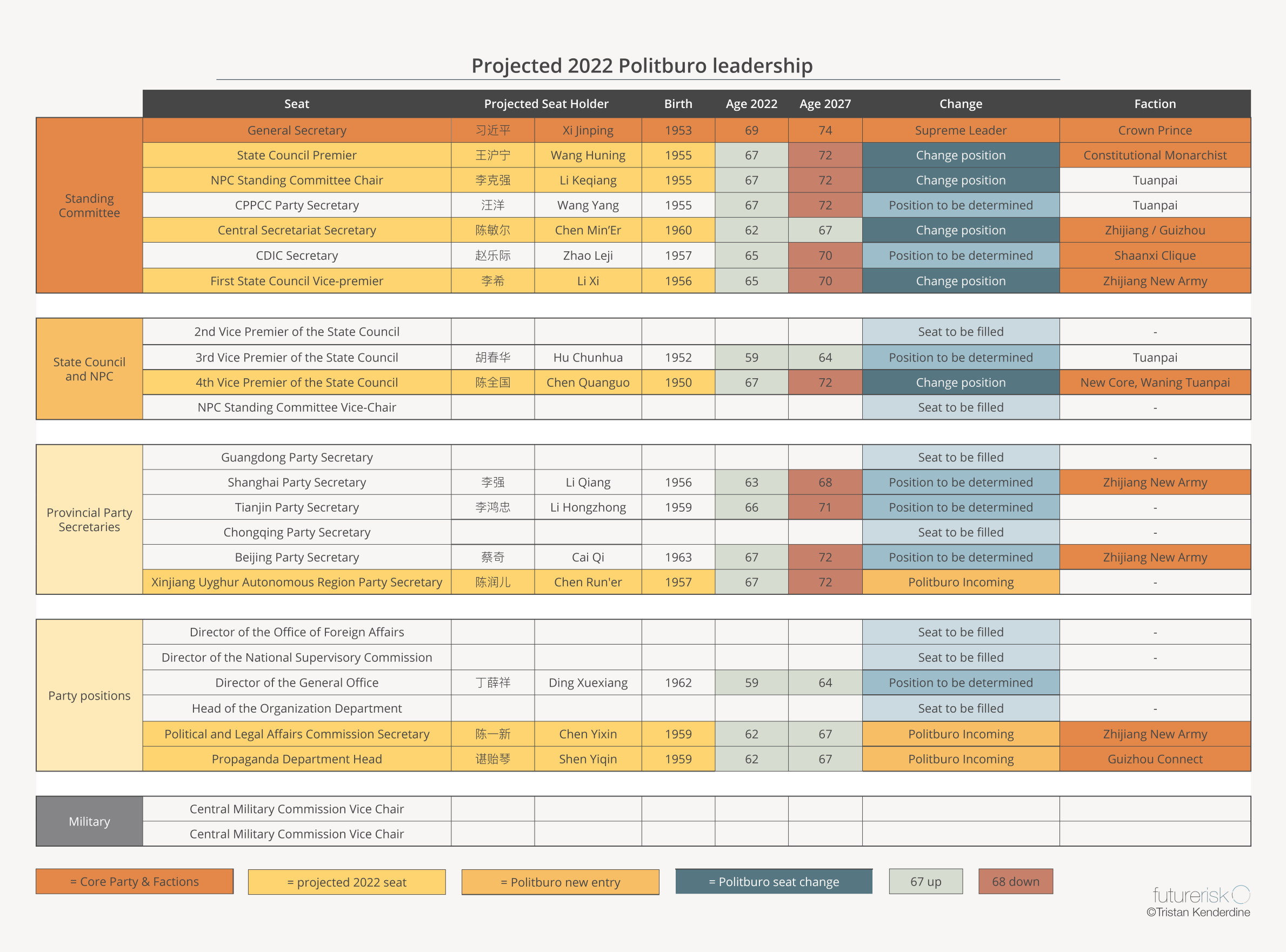 If Shen does not ascend to the Politburo, she would still likely be promoted to a central position, probably as a state councilor or in one of the higher Political and Legal Affairs Commission positions. But by the identity composition rule of one woman, Shen will almost certainly replace Sun Chunlan in Politburo. Sun, though, is an adept administrator and state agent, who controls a sprawling policy portfolio with high degrees of both policy competence and leadership. By contrast, Shen’s interests in governance are less technical, more hands-off, and more focused on party-building, CCP history, and theory. Shen’s career is more reminiscent of former Deputy Secretary General of the State Council Jiang Xiaojuan, or party ideology architect Wang Huning, though perhaps not matching either academically.

Xi’s central “New Era” turn from economic theory to CCP theory, though, opens many doors for Shen at the national level. Expect her to be deep in the political discussion on ideological formation and new forms of party history interpretation, narrative control, and history-political synthesis for the consumption of both domestic audiences in China and select international target audiences. As the CCP’s public relations effort is increasingly focused on domestic audiences, though, her connection to the regional base of the expanding Guizhou clique will likely be seen as more important as party-building continues to dominate state policy.

Xi’s consolidation of power has been obtained through steps that have arguably strengthened the cohesion and institutional strength of the CCP as a whole.

Why China Is Not Mourning Mikhail Gorbachev

The CCP remembers the late Soviet leader, who oversaw the collapse of the USSR, as a “gravedigger” and a “traitor.”

Chen Gang will likely enter the Politburo in 2027. His experience governing technoindustrial clusters will be a valuable skill set for top governance positions through the 2020s.