The China-U.S. contest over digital technology is emerging as the organizing force in international politics for decades to come. Semiconductors – the “DNA of technology,” as put by a recent U.S. supply chain review – are at the heart of what U.S President Joe Biden has called “a competition to win the 21st century.”

Three years ago, China’s President Xi Jinping identified his nation’s greatest hidden danger as its external dependencies in “core technologies,” and changing this situation is key to the Chinese Communist Party’s program for the next century of its rule. U.S. export controls on semiconductors have proved the most effective weapon against the global expansion of Huawei and other Chinese digital technology champions, and the archetype of weaponizing interdependence.

The semiconductor value chain is an exquisite example of transnational interdependence, and the impacts on it of China-U.S. rivalry will shape the choices of nations worldwide across an ever-widening field of interests. In a two-part series last year, we looked at whether TSMC’s crucial role in the global value chain provides sufficient incentive for China to invade Taiwan. Dilemmas like these will increasingly be imposed on decisionmakers in government and industry, and will involve tradeoffs given China’s growing presence in the digital ecosystems of the future and U.S. determination to stymie this. Geopolitical calculations for wealthy U.S. allies and ambitious developing nations alike require getting to grips with different aspects of the national interest stemming from China’s changing role in the global semiconductor ecosystem. 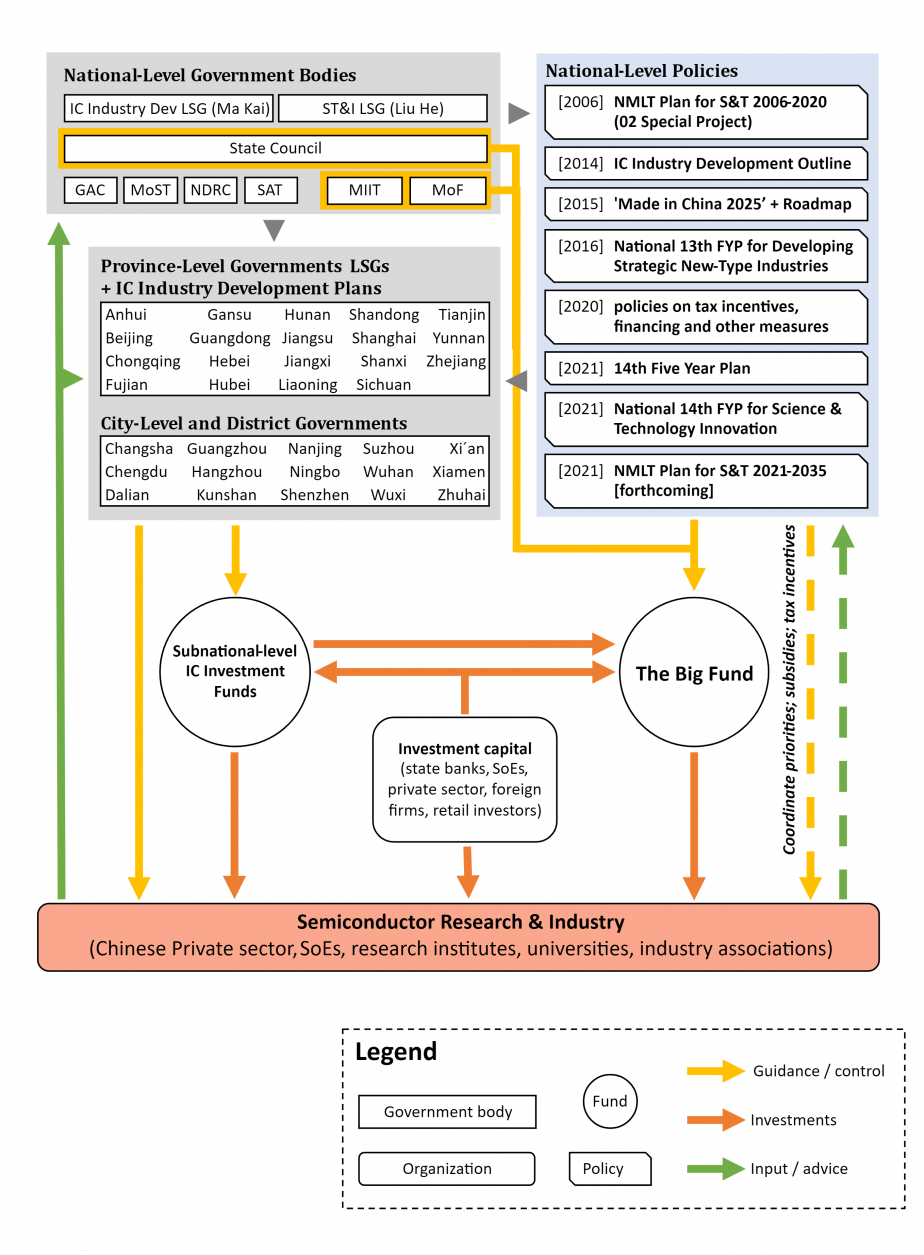 Our recent report describes China’s semiconductor ecosystem and maps it across the production steps in the global value chain.  We explain the function of each production step and its international market landscape, and in this context review recent Chinese government and industry activity.  For each of these production steps, we evaluate the prospects of China closing the gap with foreign industry leaders over the next five to ten years, and the strategic implications from a range of national interest viewpoints.

For each production step in the value chain, we present national interest implications in three “strategic dimensions” – competitiveness, national security, and resilience – based on an assessment of China’s position alongside that of the U.S. and other actors. “Competitiveness” captures commercial and technical features of this step in the value chain that affect the foundations of national power, not least because semiconductors are the foundation for so many other industry sectors. “National security” reflects the potential for “weaponization” by national governments to damage the interests of other nations. “Resilience” addresses the negative impacts from disruption in a particular value chain step for the global semiconductor ecosystem.

For each dimension, we use three criteria to describe the national interest considerations involved. For competitiveness, policymakers must concern themselves with revenue capture from market share in the relevant field, barriers to entry for any new player trying to enter the market, and spillover benefits that could have utility for other steps in the value chain and other industry sectors. For national security, relevant considerations include the potential to facilitate espionage, the military utility of capabilities in a particular value chain step, and the degree to which market concentration provides a chokepoint that can be “weaponized” by nations whose firms hold dominant market share. And for resilience, the extent to which a value chain step represents a concentrated point of failure for the global semiconductor industry, the potential for disruptions to generate spillover damage in other value chain steps, and replicability of the relevant functions in the event of disruption are all essential to national planning.

The matrix below maps these nine criteria against the eight production steps that we describe, providing a “heat map” of the value chain’s strategic importance. The color codes show the degree to which each criterion applies to a given production step. This indicates the level of interest that governments will show and the likelihood they will take particular actions concerning this step in the value chain, which are explored in further detail by our report. 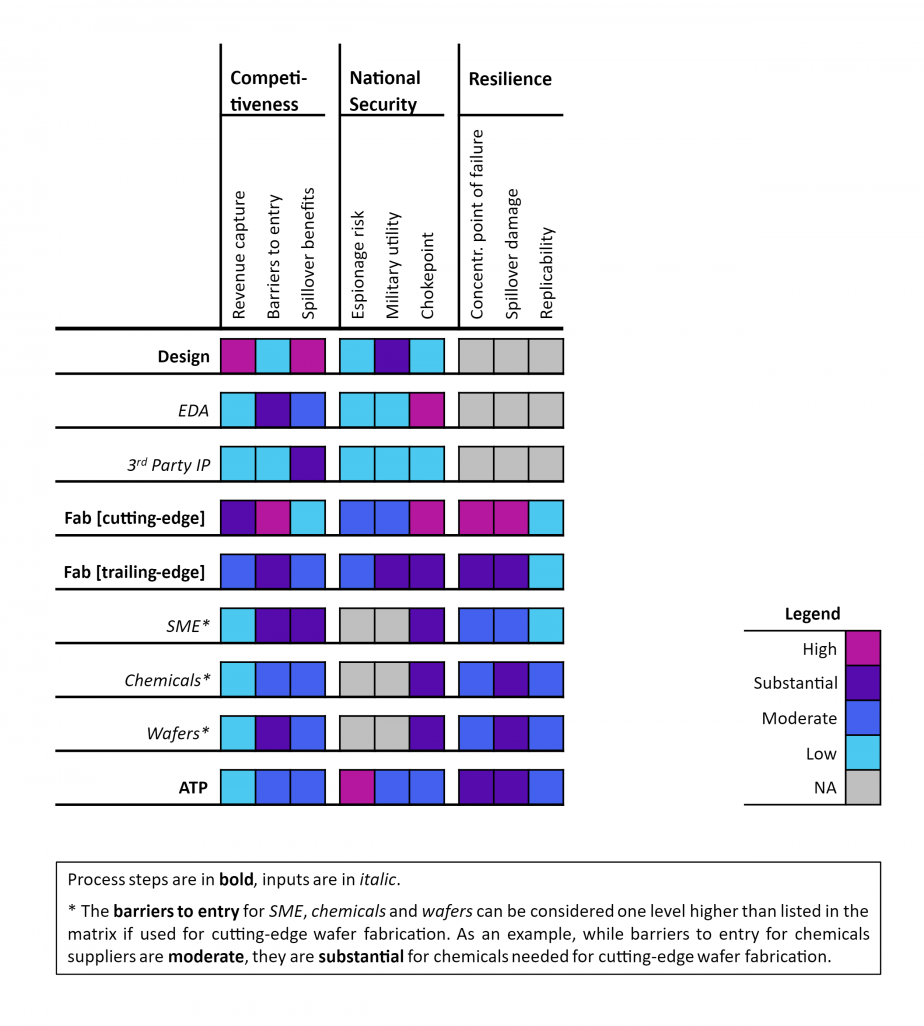 For example: Regarding chip design, Chinese efforts to develop domestic firms with world-class capabilities in this field are motivated by revenue capture, spillover benefits, and military utility, while for the same reasons the United States seeks to frustrate Chinese progress, reflected in U.S. export controls targeting firms like Huawei. But these export controls did not directly target chip design, as the nature and market landscape of this production step do not provide the most efficient chokepoints. These lie instead in the EDA (chip design software) and SME (manufacturing equipment) steps of the value chain, which have in fact been targeted by U.S. export controls. These controls have not seriously impacted the global semiconductor sector’s resilience, given the relative ease of replicating chip design capabilities, and the fact that chip design capabilities do not constitute a concentrated point of failure for the transnational value chain as a whole.

The same is not true of cutting-edge fabrication, a production step in which the dominance of Taiwanese firms and especially TSMC represents a concentrated point of failure for the entire global semiconductor sector, which is now widely recognized as a threat to multiple industry sectors, and hence a concern for national decisionmakers seeking to ensure supply chain security. Yet the barriers to entry for cutting-edge fabrication make this risk extremely hard to mitigate, whether for Chinese leaders afraid of U.S. export controls kneecapping their technological progress, or foreigners worried about the impacts of political instability or potential war between Taiwan and China.

Semiconductors provide a litmus test for whether supply chain “decoupling” really serves the national interest, as the global chip shortage stretches toward next year and capacity expansion in China provides prospect for relief.  With nations gearing up for a new era of semiconductor-centric techno-nationalism, the trade-offs and daunting expense involved in trying to weaponize and onshore the value chain demand consideration.  We will explore these challenges in another report by the end of 2021.

The Chip 4 Alliance Might Work on Paper, But Problems Will Persist

Can an envisioned supply chain partnership between the U.S., Japan, South Korea, and Taiwan actually become a reality?

With its strong tech industry, Israel has emerged as a rare beneficiary of the U.S.-China rivalry – for now.

The Future of AI Depends on Asia

Recent geopolitical, economic and epidemic shocks in Asia reveal the real value of the region in the global economy and its future impact on world’s technological development.

By Me Me Khant

Two years on from the military coup, the U.S. government is saying one thing about the country's crisis and doing another.