Phuong is hunkered down with around 20 fellow Vietnamese – now fellow seekers of refuge – at Daionji, a Buddhist temple in Honjo, in Japan’s Saitama Prefecture.

The 22-year-old had been working at a food manufacturing factory in Kagoshima Prefecture for nearly three years under Japan’s Technical Intern Training Program. However, as she developed a hernia and started to suffer from severe pain, she became unable to perform her daily tasks.

“Because I could not work anymore, I had to leave my company housing,” said Phuong, who has asked to use a pseudonym due to fear of retribution. “Fortunately, I knew about this temple and that they provide shelter. Otherwise, I had nowhere else to go.”

Had she remained perfectly healthy, it may not have mattered. As the COVID-19 pandemic hit sectors such as manufacturing and construction, even those technical interns capable of working were among the first to be cut from the labor force. As “interns” they do not receive the same protections that Japan’s otherwise solid labor laws afford, such as prevention of dismissal without cause. And as soon as they lose their jobs, they will also be evicted from any company-provided housing.

“I want to go back to Vietnam as soon as possible,” Phuong said. “I miss my family so much.”

Phuong, and many of the people sheltering at the temple, feel stuck in Japan. Whether they were laid off from their jobs or their contracts simply came to an end, travel restrictions introduced due to the pandemic have made going back to Vietnam incredibly difficult.

According to the Justice Ministry, around 38,600 trainees were unable to return home as of March. In addition to the limited availability of flights, price has been an obstacle. “Currently, flights cost around 230,000 yen,” or around $2,100, Phuong said. “I have no idea how I can pay for that, especially now that I have no income.”

At one point during the pandemic, Daionji hosted around 40 trainees who were in a similar situation to Phuong. 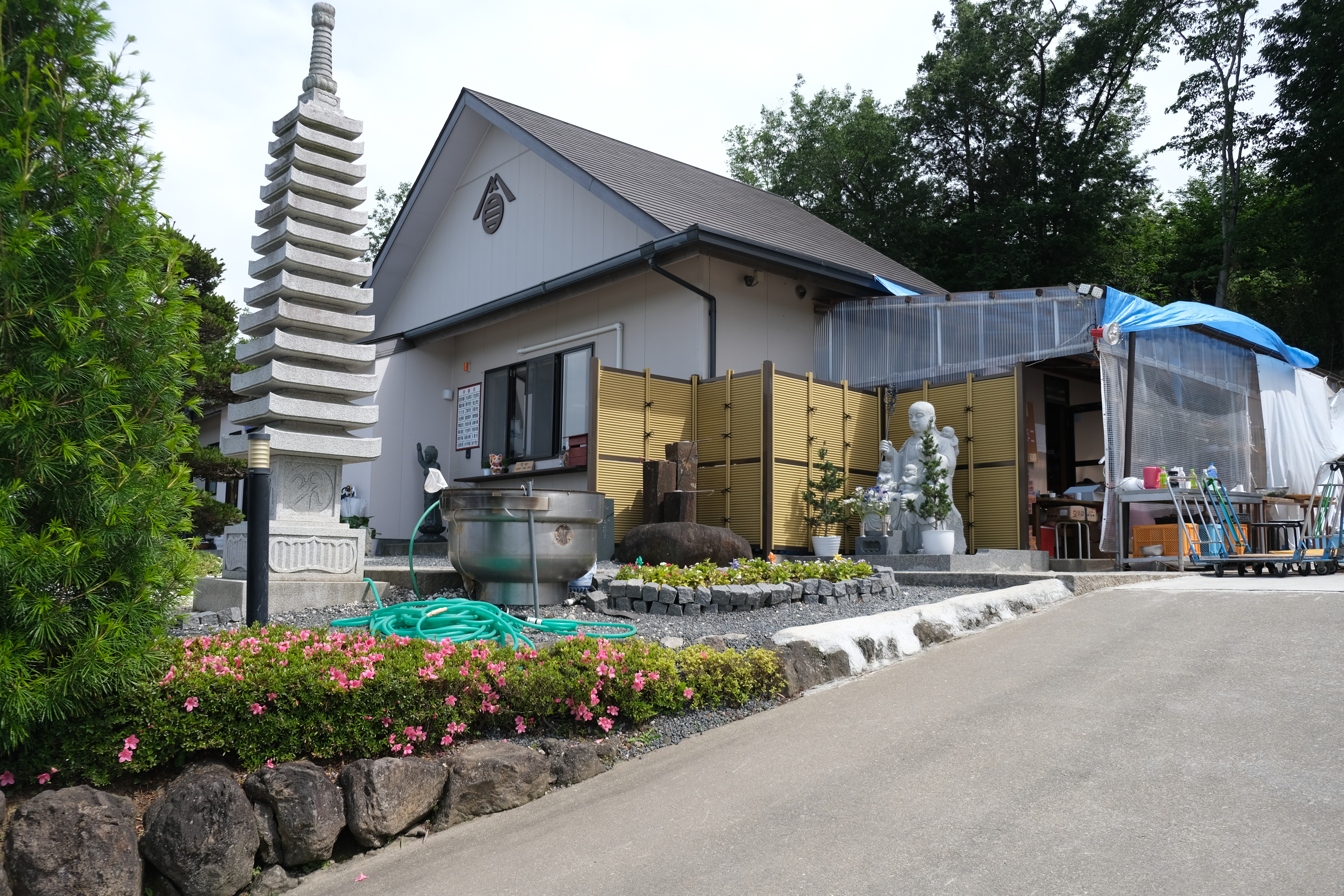 Cracks in the System

Since its creation in 1993, the Technical Intern Training Program has brought an influx of young workers from developing countries in Asia to Japanese farms and enterprises. Participation increased significantly from 274,000 in 2017 to 410,000 in 2019, with Vietnamese workers representing 51 percent of the total.

The Japanese government states that the trainee program’s objective is to promote international cooperation for human development by transferring skills to workers from other Asian countries. However, critics say that the program does little more than cover a chronic labor shortage in unskilled, blue-collar jobs that are regarded unfavorably by many Japanese. Rather than acquiring useful skills, most of the interns wind up doing repetitive work that does not teach them anything of marketable value for when they return to their home countries.

“I came to Japan mainly because I thought I could learn the state-of-the-art  ‘Japanese way’ of working,” said Dinh, 28, who used to work at a factory in Miyazaki Prefecture. “But the nature of the work I was given was completely different from what I had expected. I do not feel like I was able to learn much through my three years there.”

Dinh, who is able to converse comfortably in Japanese, spends at least six hours a day studying the language while searching for better employment opportunities.

“Someday, I want to start my own business in Vietnam,” he said.

The trainee program depends upon the recruitment of young people from less developed economies who are desperate to work in advanced environments and eager to earn Japanese yen. However, there is a risk of exploitation even before these young recruits leave for Japan. Vietnamese trainees must pay a slew of predeparture fees to brokers and sending organizations that push many to secure loans and mortgage assets. Although this amount varies, trainees can pay up to 1 million yen (around $9,000), plunging them into substantial debt.

“The technical trainees are still willing to spend this amount for a chance to gain a ticket to what they believe will be the ‘privilege’ of working abroad, particularly in Japan,” said Yoshihisa Saito, an associate professor at Kobe University who specializes in labor law and labor market governance in Southeast Asia. Though Vietnamese law stipulates that commission fees may not exceed $3,600, this rule is barely effective.

On average, a Vietnamese trainee can earn between 120,000 and 150,000 yen per month. They will typically send 70,000 to 100,000 yen back home to help support their family (who will also pay off any loans), which leaves them with very little to survive on in Japan.

Critics and activist groups have called for a complete overhaul of the technical intern program on the grounds that it violates human rights, with the United States citing it as the reason for its decision to downgrade Japan on its human trafficking ranking.

In 2019, the Justice Ministry announced that there were 759 cases of suspected abuse in the program, including unpaid work and illegal levels of overtime. According to the ministry’s investigation, 171 trainees died between 2012 and 2017. The ministry stopped disclosing the reasons for such deaths in 2018 due to privacy concerns, though it admitted there were 98 deaths between 2018-19. Last year, it was reported that the program could be causing long-term damage to the relationship between Japan and Vietnam.

“The recruitment of interns constitutes an entire business of its own,” said Saito, explaining why the program has become so popular despite its various flaws. “Intermediaries receive commission fees, both here and in Vietnam, as long as they manage to get interns into Japan. Whatever happens to the interns afterward – whether they land in terrible workplaces, lose their jobs, or go missing – does not matter to them.”

The Japan Vietnam Mutual Support Association offers various forms of support for those Vietnamese stranded in Japan, such as distributing food and essential goods, providing protection, and facilitating access to language and legal support.

The group is currently catering to around 20 Vietnamese individuals taking shelter at Nisshinkutsu, a Buddhist temple in Tokyo’s Minato Ward. According to Representative Director Jiho Yoshimizu, inquiries from desperate Vietnamese stuck in Japan topped 10,000 last year. Given the numbers, Yoshimizu believes such forms of grassroots support may not be sustainable.

“The problem with the Technical Intern Training Program is that there are limited follow-up measures to support those who are out of work or facing difficulties such as abuse,” Yoshimizu said. “Those who managed to get here and access protection are lucky, but the government should take responsibility to develop necessary aid policies, especially since it is a state-led program.”

On top of assisting the livelihoods of interns, the support group advocates for changes in policy and legal frameworks by engaging government officials and policymakers.

“Interns in Japan face various forms of oppression and discrimination, and with language barriers, they cannot speak up for themselves,” Yoshimizu said. “I feel it is our mission to amplify the voices of those inflicted by the issue.”

Where there were cracks in the system, the pandemic only made them worse. Groups supporting those who have had bad experiences in the technical trainee program say that the government needs to take a closer look at the issues the interns face. Otherwise, when people like Phuong are finally able to return home, they’re not going to be singing Japan’s praises.

How Japan Got the Pandemic Right – and Wrong

By Trevor Incerti and Hikaru Yamagishi

As Japan reopens, a look back at its handling of the COVID-19 pandemic from the beginning.

The cautious easing of restrictions stirred both hope and worry for the roughly half-a-million foreigners locked out of Japan since early 2020.

Expats stranded in limbo overseas have hope on the way with borders poised to reopen to all foreign residents, albeit at a staggered pace.

What Will Japan’s Great Reopening Mean for Immigration Policy?

During the pandemic, Japan showed itself to be extremely skeptical toward foreigners, raising questions about the country’s immigration policy going forward.