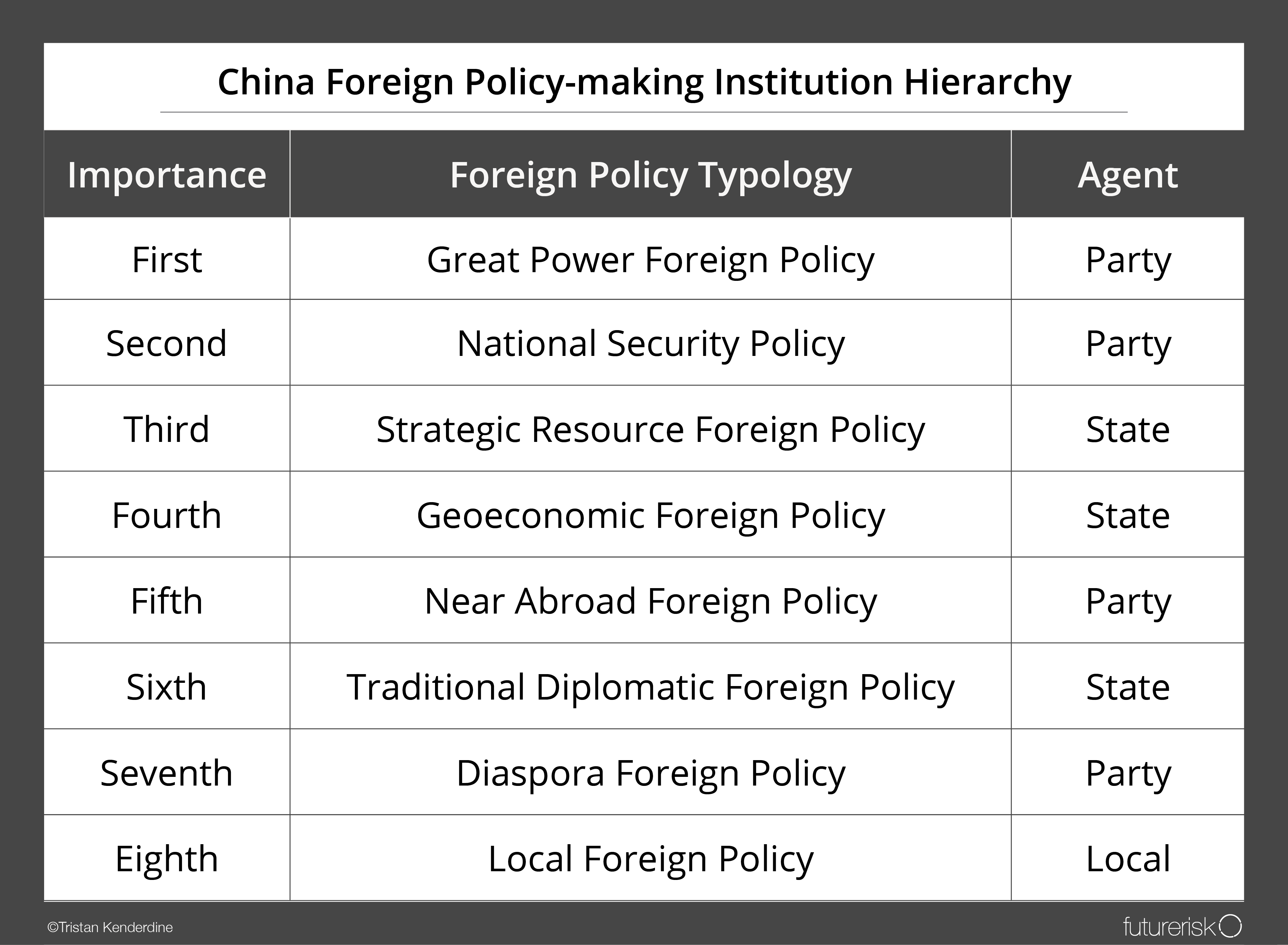 Great power foreign policy is the meta policy institution, encompassing the Party Leading Groups. Though rarely seen in public, this level guides the PRC’s course through near horizon history. While national security is the domain of the party-military complex, strategic resource security is a form of foreign policy enacted through state institutions, focused on oceans, agriculture, poles, technology and space. Geoeconomic foreign policy is another field agented through the state, where the Ministry of Foreign Affairs is the garnish to Ministry of Commerce’s meat.

Through the Belt and Road, another foreign policy institutionalization is emerging, that of near abroad foreign policy. Taken from the Soviet Union foreign policy structure, China’s enhanced focus on geographically near state economies is managed primarily through the Political and Legal Affairs Commission and the People’s Armed Police and Ministry of Public Security, which operate under its command.

Diaspora affairs is another distinct area of foreign policy, organized through the United Front Work Department, Overseas Chinese Affairs Office, the Taiwan Affairs and Hong Kong Affairs Party Leading Groups, as well as the Ethnic Affairs Leading Group and wider policy portfolio, which is increasingly important given the redefinition of “overseas Chinese” extending increasingly to Uyghurs, Kazakhs, and other minorities living abroad.

The eighth typology is local jurisdictions and their ability to form independent foreign policy, which is increasingly apparent through the Belt and Road systems. Different provinces and cities are pushed into targeted external economies, for example Guangdong to the Pacific Islands. Localism can also work independently of central goals, such as the investment-attracting Korean foreign policy of Dalian city under Bo Xilai.

Exploring the institutional connections between the differing party and state organs to create a holistic understanding of foreign policy formation by attempting to categorize and typologize China’s disparate foreign policy apparatus is an interpretative task. The array of institutions that contribute to foreign policy formation, debate, and deployment in China is huge. They are also in a constant state of change, as Party Leading Groups morph into Commissions, new foreign policy responsibilities coalesce around the domestic security institutions, or new strategic responsibilities center state institutions traditionally focused on domestic resources. The face of diplomacy once it appears at Foreign Minister Wang Yi’s level is either preordained senior CCP policy, in the case of great power competition with the U.S., or delegated responsibility for low priority geographies, such as foreign policy related to Kazakhstan’s politics. 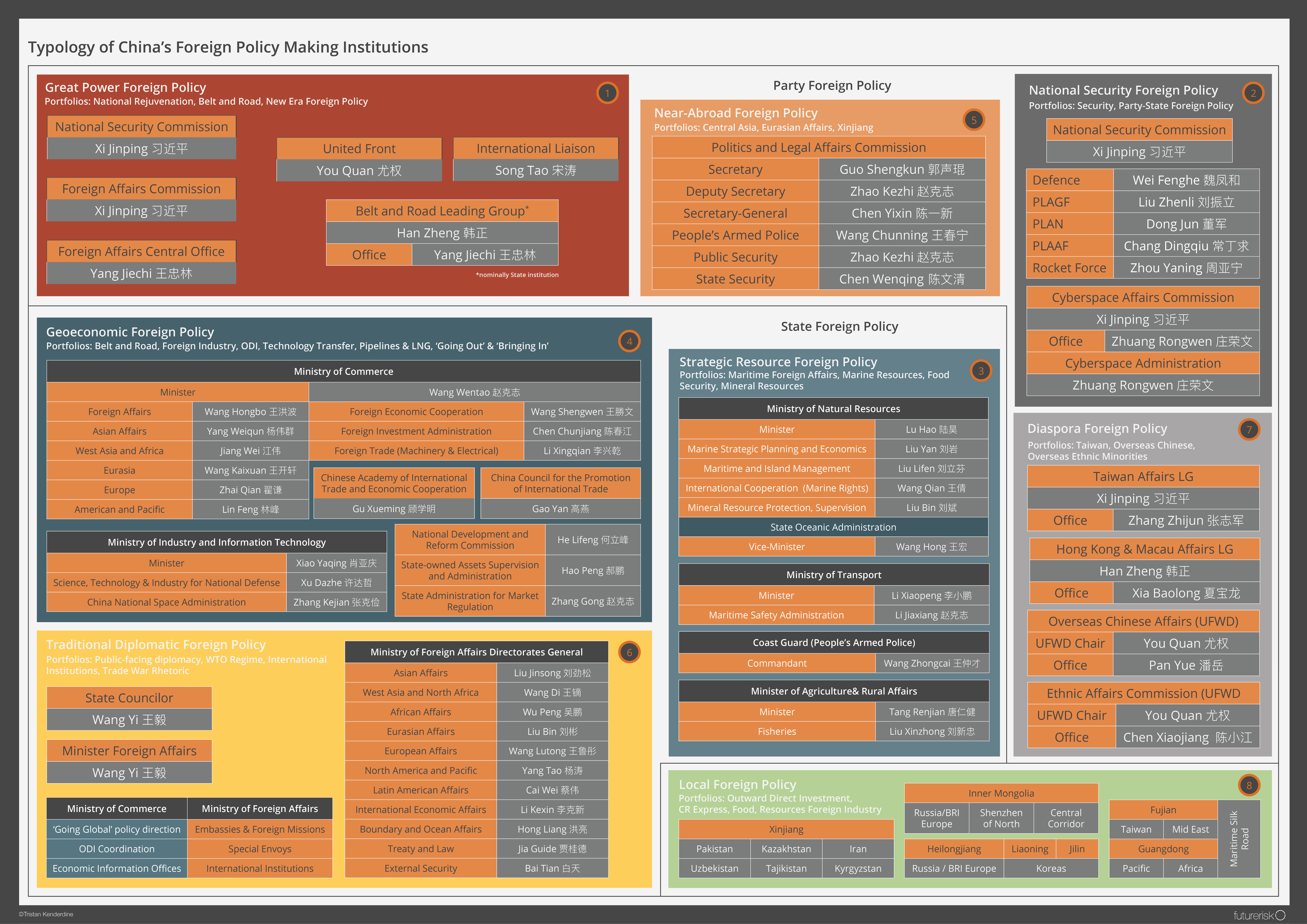 It is widely understood that the Ministry of Foreign Affairs has very little say in foreign policy. While the public face of state diplomacy, MOFA is usually the last to know what the actual foreign policy is. The education backgrounds of MOFA staff are overwhelming languages and humanities-driven, with little hard economics, political science, or political theory. While they are currently being eaten by the wolf warrior class, in the future a more economically open China may have a sleeping giant of resources within the Ministry of Foreign Affairs.

China’s foreign policy through the second Xi Jinping administration has been more geoeconomic than geopolitical. The nexus of this is the combination of Ministry of Commerce and Ministry of Industry and Information Technology. China’s Ministry of Commerce is leading the institutionalization of the combination of international trade, technology, and technoindustrial policy model through foreign policy leadership of other agencies such as Ministry of Industry and Information Technology. Together, these two ministries perform similar functions in catch-up industrialization and technoindustrial policy.

However, something entirely novel to the China model is the Ministry of Natural Resources as a key membrane between state foreign policy and strategic foreign policy. This ministry controls institutionalized control mechanisms over land and oceans, especially after absorbing the State Oceanic Administration. The MNR works with the Ministry of Agriculture and Rural Affairs to policy co-opt various otherwise domestic agencies into the same foreign resources policy sphere.

Ignoring the party institutions or the various near-abroad-, geoeconomics-, or strategic-focused foreign policy institutions is to give in to the political theater of the wolf warrior, and to be willingly fooled by China’s hierarchy of foreign policy prestige, which differs markedly from the hierarchy of actual power. The wolf warrior reality show in the Ministry of Foreign Affairs through the second Xi Jinping administration was a sideshow in China’s foreign policy formation. Similarly, looking now for the future replacements of Yang Jiechi and Wang Yi in China’s public-facing diplomacy roles does not yield the key to understanding the party, state, or strategic direction of China’s future foreign policies.

China’s foreign policy specialists are struggling to satisfactorily explain China’s rise or how it is likely to behave as a prominent global leader.

Without any strong contender emerging to replace Yang Jiechi, the next director of the Office of Foreign Affairs could be cut from the Politburo, opening a slot for a different party position.

The 3 Pillars of Chinese Foreign Policy: The State, the Party, the People

China’s foreign policy apparatus is much more than just the Ministry of Foreign Affairs.