Japan’s Ministry of Defense (MoD) announced on May 24 that six Chinese and Russian strategic bombers flew near the Japanese archipelago ‒ an apparent bid to warn against the Quad summit, held the same day, of the leaders of Australia, India, Japan, and the United States.

The two Xian H-6 bombers were spotted flying over the East China Sea and the Sea of Japan (also known as the East Sea), along with two Russian Tu-95 bombers, from the morning until afternoon of May 24, the MoD said. Later on, two difference H-6 bombers and the same two Russian Tu-95 bombers flew through the Miyako Strait between the Japanese islands of Okinawa and Miyakojima to enter the Pacific Ocean from the East China Sea, the ministry said.

In addition, one Russian Il-20 electronic intelligence aircraft was spotted flying over the Sea of Japan on the same day.

Fighter aircraft of the Japan Air Self-Defense Force (JASDF) scrambled in response to the flight. No aircraft violated Japanese airspace. 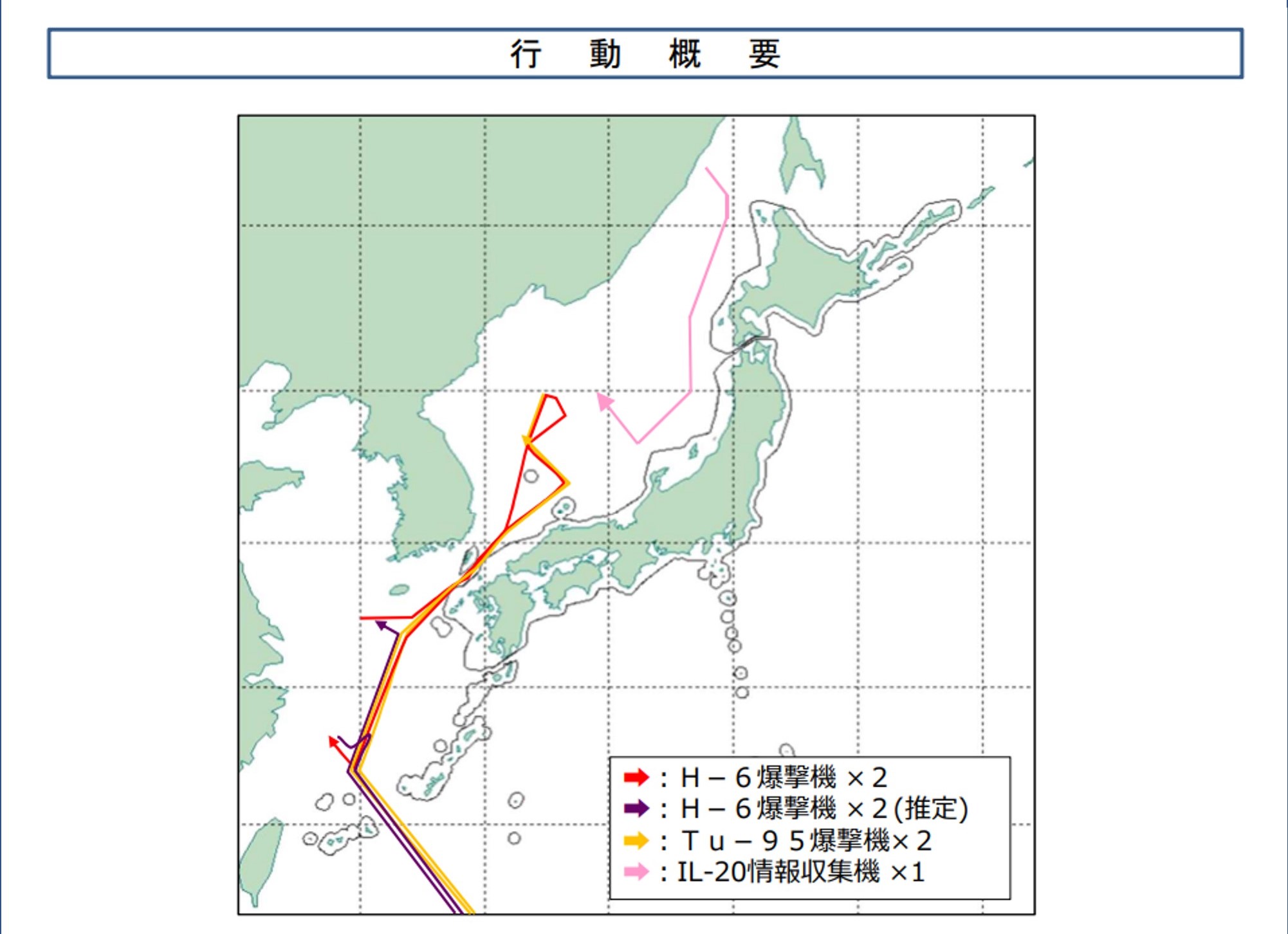 A map created by the Japanese Ministry of Defense shows the flight paths of the Chinese and Russian aircraft.

“We cannot overlook any provocations to raise tensions in the East Asian region,” Japan’s Defense Minister Kishi Nobuo said at a press conference.

The minister said Tokyo conveyed serious concern about the flight to China and Russia through diplomatic channels.

On the same day, Japan hosted a Quad summit with the U.S., Australia, and India in Tokyo to advance cooperation in the Indo-Pacific region.

This was the fourth joint flight by Chinese and Russian warplanes around Japan reported by Japan’s MoD since the first in July 2019, and the first since last November.

Just like Japan, South Korea is also pushing to strengthen and broaden its alliance with Washington while joining the international condemnation of Russia’s aggression of Ukraine. U.S. President Joe Biden was in Seoul for a bilateral visit before heading to Tokyo.

Meanwhile, the Chinese Ministry of National Defense and the Russian Ministry of Defense both announced on May 24 that the two nations’ air forces held a joint aerial patrol over the Sea of Japan, the East China Sea, and the western Pacific.

“Our mission this time strictly followed international law and there was no airspace incursion. This exercise was conducted based on the 2022 military cooperation plan and was not intended to counteract any third country,” the Russian Ministry of Defense said.

China’s state-run Global Times newspaper on May 23 ran an opinion piece claiming the Biden administration is “deepening the institutionalization of the Quad and attempting to move forward toward an Asia-Pacific version of NATO.”

Kishi, the Japanese defense minister, said at a press conference on May 20 that the aircraft carrier Liaoning of China’s People’s Liberation Army (PLA) Navy has flown more than 300 sorties since early May in a series of drills near Japan and Taiwan. The drills could be a response to Washington and Tokyo as the two nations are taking a more assertive position on China’s aggressive posture toward self-ruled Taiwan.

After the Ukraine war, will China maintain, expand, or scale back its military cooperation with Russia?

It was the second highest number of scrambles in a single year, representing the worsening security environment surrounding Japan.

Anti-air and anti-ship missiles will be sent to Ishigaki-jima in 2022.

Chinese jets, ships, and administrative moves add up to a months-long escalation of the East China Sea dispute.