Today I complete my tour of Central Asia. I return to India convinced that India and Central Asia must reconnect. It is important for the future that we seek for our countries and our region. So, we will improve our surface connectivity, as well as our digital and air connectivity. We will reach you through Iran and other Central Asian countries. But, I also hope that India and Tajikistan can connect directly, as we once were in history.

India’s Connect Central Asia policy has roots in 2012, but hasn’t been much of priority over the years for New Delhi. Modi’s statements may be sincere, but Central Asia is one of the least connected regions in the world. The Fergana valley is an endless source of random border skirmishes. Uzbekistan routinely closes its borders to Kyrgyzstan and Tajikistan–meanwhile Afghan narcotics have little trouble making into the international market. Turkmenistan, avowedly neutral and politically isolated (it never joined the SCO, CSTO, and never ratified the CIS charter) has been reluctant in the past to allow foreign nations access to its infrastructure. 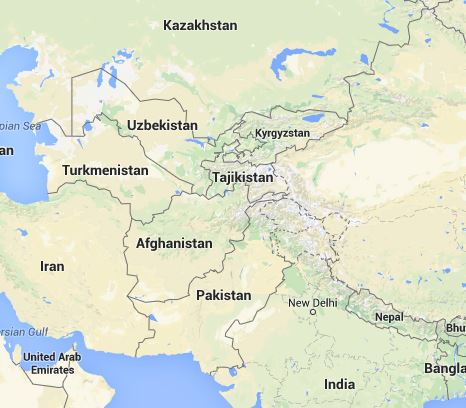 Surface connectivity is complicated by geography and geopolitics.Geography presents a serious problem for Indian interests in Central Asia. Central Asia and India are separated by mountains and conflict zones, not to mention Pakistan, which isn’t particularly inclined to allow India to transit through its territory, and China, which may be similarly uninterested in helping the Indians reach the region. Instead, India has proposed approaching Central Asia from the West. Here, at least, there is hope that dovetails nicely with Central Asia’s own aspirations.

Last month, Hossein Ashouri, deputy head of Iran Railways, said that Central Asia’s governments are considering a plan to use Iran’s railroads to move cargo from the border to the port city of Bandar Abbas. Progress had already been made between Iran and Kazakhstan, which settled a protocol in February for Iranian companies to use Kazakhstan’s railways.

As Iran and the P5+1 approach a final deal–rumored for Monday, but remaining elusive–Central Asia is cognizant of the fact that the opening of Iran presents a huge opportunity. Not only would the easing of sanctions make trade with and through Iran more profitable, but Iran as a transit route to Europe for Central Asian gas is an attractive idea. In Turkmenistan, Modi discussed the Turkmenistan-Afghanistan-Pakistan-India (TAPI) pipeline, proposing the possibility of tacking on a land-sea route through Iran. The trouble, as Casey Michel outlined last week, is that TAPI “has long stood as something of an idealized project – fantastic on paper, but with little traction on the ground.” I’ll echo Michel’s assessment that TAPI has far more going against it than for it.

A gas route through Iran can be thought of as an alternative to the TAPI project, but India stands to gain from forward movement on either front. India’s energy demand certainly drives interest in seeing TAPI through, but Pakistan and Afghanistan are significant obstacles that look likely to outlive the Iran sanctions. Meanwhile, Indian investments in Iran–particularly in developing the Chabahar port–aim to create a land-sea trade route to Afghanistan that bypasses Pakistan. It would match up nicely with increased Indian investment in Central Asia. Turkmenistan, meanwhile, has plenty of gas to supply both Europe and India–if it had the infrastructure to do so. (And I hear Turkmenistan is looking for buyers who pay their bills.)

Central Asia certainly hopes that Modi’s rhetoric about reconnecting India and the region are more than just the fluffy statements of a visiting leader–if for no other reason than to add another partner. India will never rival Russia or China in Central Asia, but that doesn’t mean Central Asians aren’t interested in Indian money and expertise. Looking at just surface connectivity, India faces significant obstacles–the Himalayas and Pakistan loom equally large in this regard–but a settlement between Iran and the West would serve India well.

The Turkmenistan-Afghanistan-Pakistan-India (TAPI) pipeline project seems to have far more going against it than pushing in its favor.

Kazakhstan Wants in on TAPI

Weekend reading: Turkmen, Turks and other Turkmen, and the Tajikistan internet.

When Will TAPI Construction Begin?

Ashgabat says December, but New Delhi might be getting cold feet.