After the boat problems we’d had a few days earlier, we decided to take another shot at locating a large shipyard we heard built and repaired some of the largest vessels around Ben Tre. Fearing another engine malfunction that would leave us stranded on one of the delta’s myriad canals, we called the captain the night before to ask if he truly believed his boat was up to the task. Rising to the challenge, he responded with confidence and a touch of indignation: “I’d bet my life on it.” 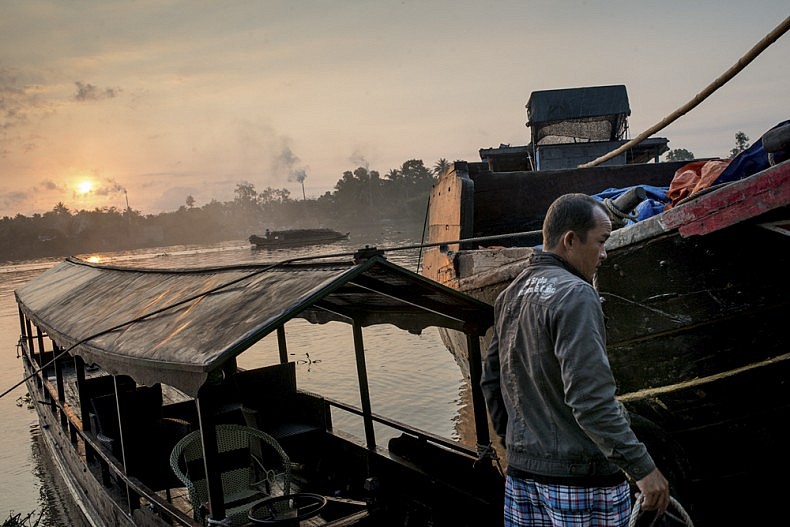 River traffic passes the shipyard in the early morning on the Mekong. Photo by Luc Forsyth.

Getting out of bed in the predawn darkness for what felt like the hundredth day in a row (despite having been on the road for only a week), conversation was at a minimum as we made our way towards the riverside jetty where our boat waited. The boatyard was more than an hour’s drive, said the captain, and if we stood a chance at arriving in time to catch the best of the morning light we had little time to spare.

True to the captain’s word, the boat’s engine battled steadily against the Mekong’s current without even a trace of smoke.

This family-owned shipyard is one of seven major boat repair facilities serving the Mekong transport vessels outside the city of Ben Tre. Photo by Gareth Bright.

“Do what you want, just let us have some tea first,” said the manager of the shipyard, Muoi. His name was translated as the number Ten, literally referring to the order in which he was born in relation to his siblings. If there was any underlying resentment from his nine older brothers and sisters about his position of authority over them, Muoi chose not to share it with us. We had arrived at the facility just a few minutes after sunrise, surprising the dozen or so bleary-eyed workers who were congregating around a small wooden table to take in a few doses of morning caffeine; they seemed neither pleased nor annoyed to see us. 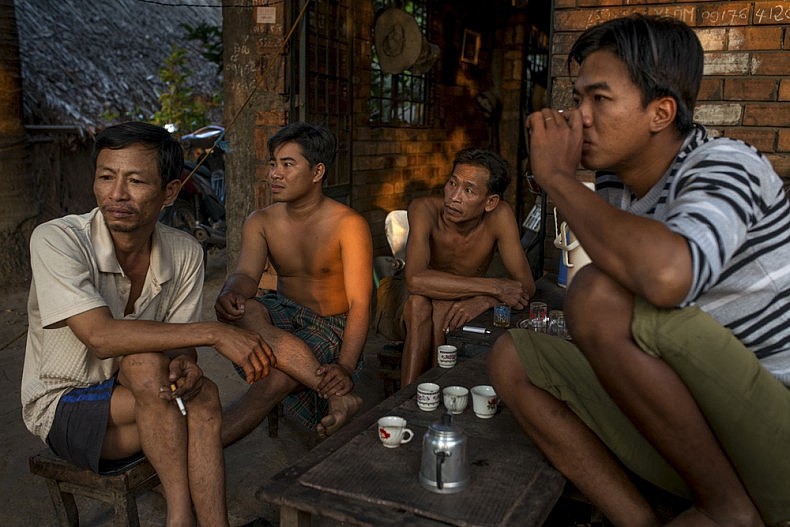 As no one in our team had been able to adequately satisfy our respective coffee addictions, we empathized with their groggy indifference and kept our cameras low until they seemed sufficiently awake to tolerate the intrusion. Even after photographing the intimate details of people’s lives full time for nearly five years, I was still aware of how violated I would feel if three strangers had arrived at my place of work and shoved a camera in my face. And so we drank tea. 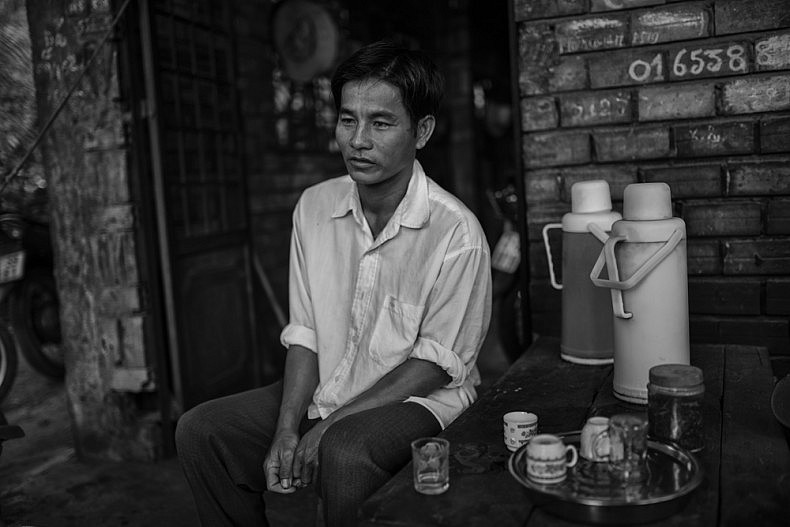 It was nearly an hour before the first signs of movement started. Rising from sagging wooden benches, the workers, now numbering around 20, moved a few meters away and squatted in a rough semi-circle under the shadow of a large and decrepit looking ship. Muoi stood in front of assembled men and women, standing rather than haunched in the dirt, and delivered the day’s instructions. Though we didn’t bother asking our translator, Mi, to relate the exact words being spoken, the message was clear enough: Today we will build and fix boats.

The crew listened to Muoi’s speech in silence punctuated only by the flinty sound of flicking lighters as they smoked cigarettes. When he was finished, the workers rose and spread throughout the shipyard, presumably starting where they’d left off the day before. The once quiet air was almost immediately filled with the screeching of poorly oiled power tools, and the morning stillness transformed into a frenzy of activity. 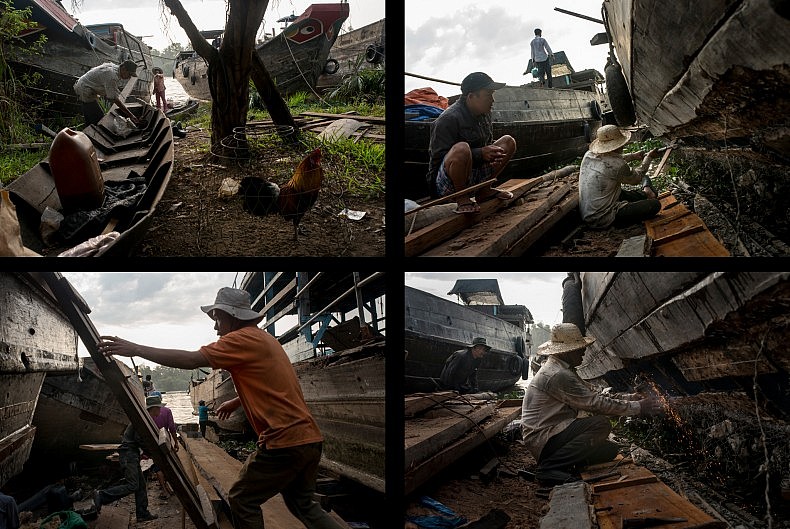 Workers set about repairing boats at a family-owned shipyard on the Mekong. Photos by Luc Forsyth.

Most of the work seemed to involve patching holes on the hulls of ships that looked to have seen at least 20 years of hard service on the Mekong. First, workers attacked the rotten areas with iron pickaxes, gouging out soggy splinters to expose the metal ribs underneath. Electric grinders were then used to completely excise the abscesses, creating jagged holes that looked straight into the cavernous cargo holds. These were covered by sheets of barbed wire which were secured with nails.

Nearby, another man was tasked with the unfortunate duty of hand-mixing fiberglass paste in a repurposed plastic petrol can, his face periodically obscured by clouds of yellowish powder — no doubt wreaking havoc on his respiratory system. When the substance was blended to his satisfaction, he carried the container to the patching teams and slathered the mixture over the mesh, theoretically sealing the holes. With next to no knowledge of marine engineering, we assumed the ad hoc technique was effective, otherwise the ten or so ships in the dry dock would surely have taken their business elsewhere. 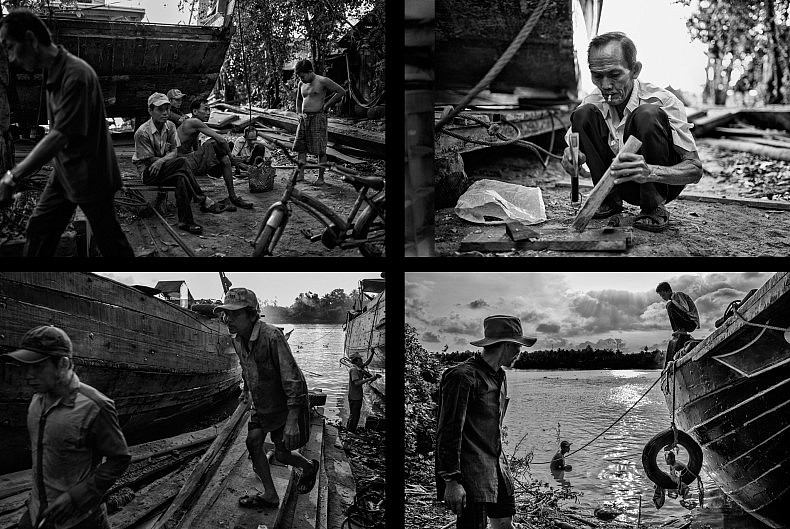 Workers at the shipyard receive the day’s instructions (top left) and then set about repairing boats. Photos by Gareth Bright.

Everywhere there was movement. Those who weren’t patching holes applied copious amounts of glutinous resin between hull planks or used handheld saws to fashion replacement beams for wood that was too far gone to be salvaged. A group of what looked like the strongest men in the yard waded into the river to retrieve sunken logs, attaching them to a steel cable and heaving them ashore. All the while an extended family of dogs was circling the area, looking for shady places where they wouldn’t be stepped on and skittering nervously whenever a human drew too near.

With two photographers and a videographer combing the area for interesting visuals, it required constant situational awareness to ensure that I didn’t accidentally include Pablo’s shaved head or Gareth’s tattooed arms in my frames. I’m sure they were both having similar difficulties, and without a doubt more than one curse was directed my way as I stumbled unwittingly into their frames. 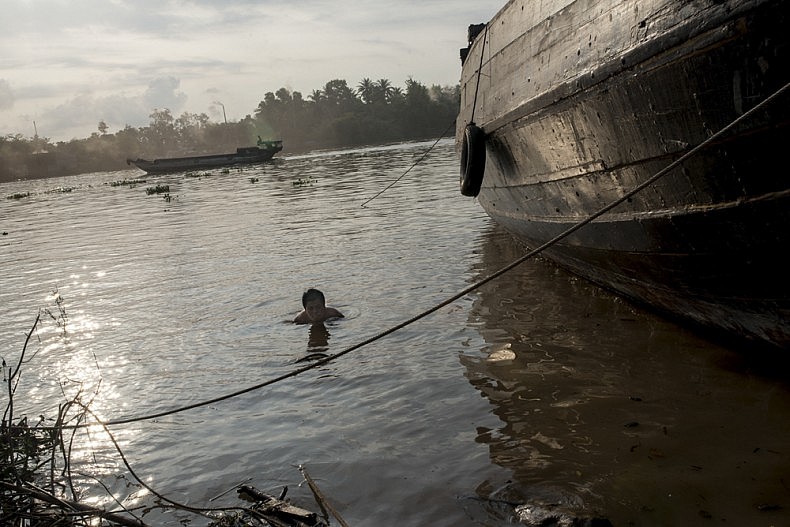 A worker submerges himself in the Mekong before a team attempts to salvage a piece of sunken lumber. Photo by Luc Forsyth.

“Water is water,” Muoi said blandly, clearly not thinking much of my question. The sun had risen nearly to its apex, and the with light far too harsh for aesthetically pleasing color photography, I had attempted to draw him into a conversation about the Mekong’s importance. “Everyone needs it for different reasons, but we all need it,” he concluded.

Though Muoi’s answer was not the emotional statement of love for the Mekong we had hoped for, he had gotten to the heart of the matter. While people in this part of Vietnam used the river in different ways — such as the coconut farming or shrimp ponds we had seen visited earlier — everyone relied on it in one way or another. 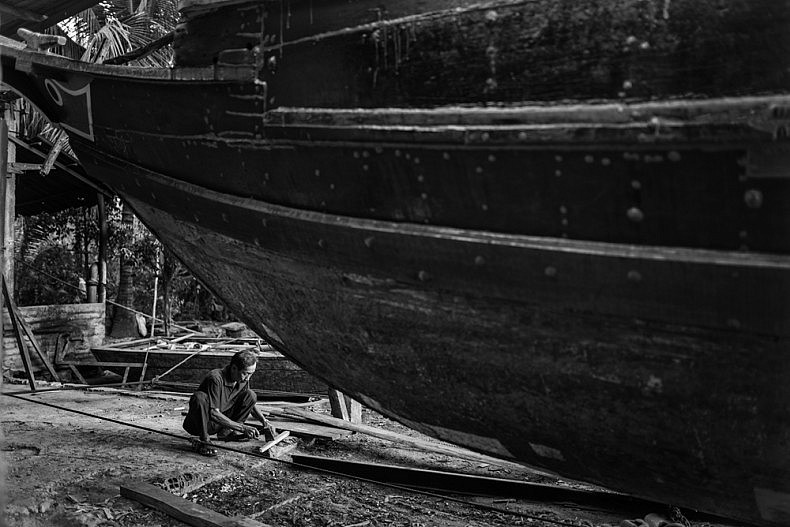 A shipyard worker trims pieces of wood in the shadow of a boat under repair. Photo by Gareth Bright.

Ben Tre lacked a major port facility and so river boats, such as the ones being refitted at Muoi’s shipyard, were the only economically viable way for people in the area to send their products into the markets beyond. These lumbering ships were so important that at least seven other facilities of comparable size operated year-round to keep the flow of commerce moving. For Muoi and the 20 other family members employed in the yard, their livelihoods were no less tied to the Mekong than the delta’s rice farmers.

Different reasons, needed by all. Without meaning to, Muoi had summed up our entire journey on the Mekong to date. 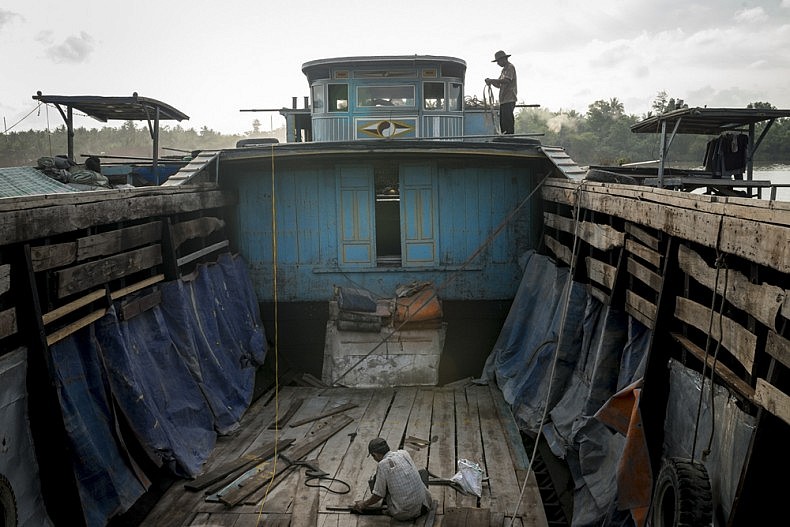 Workers repair the floor of a ship’s cargo hold. Photo by Luc Forsyth.

As we shook hands with Muoi, who was doubtlessly happy to see us leave and get out of his workers’ way, an Indian Myna bird (a species known for their ability to mimic spoken language) squawked at us from his hanging cage.

Cam On, Cam On. Thank you, Thank you.

Pakistan Scrambles for New Approach Against TTP After Peshawar Attack

Islamabad will need to focus on the TTP and the terrorism problem rather than be diverted by provincial elections at this point.