With less than a week left on the Vietnam leg of the “A River’s Tail” project, we left the Mekong delta’s urban heart of Can Tho for the much smaller town of Sa Dec to the northwest. We had no real idea of what we would find there, but decided that its reputation as an industrial and agricultural trading center made it an ideal choice for further exploring the relationship between the river and its people. We were on the lookout for unexpected ways that people were able to support themselves from water, and Sa Dec did not disappoint. 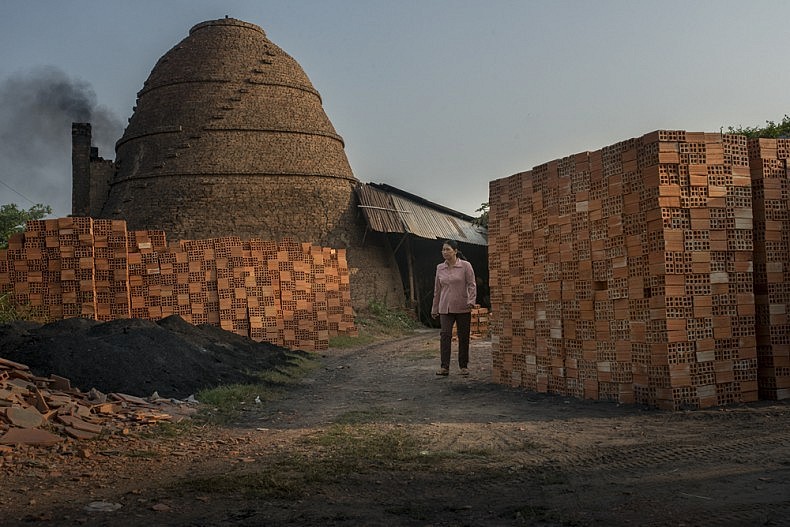 The brick factory owner walks her property in the early morning. Photo by Luc Forsyth.

As we drove into the city, brick factories defined the landscape. Stretching one after the other along the river banks, their orange kilns perpetually venting smoke, they were impossible to miss. Both Gareth and I had photographed brick factories in the past and we knew them to be highly visual places to shoot, but what we found in Sa Dec was an industry more deeply connected to the river than we could have imagined.

Houses Made From Water

Walking into the factory grounds just after sunrise, it was clear that we were too early. This had been a constant problem throughout our travels in Vietnam. Our photo-centric worldview caused us to constantly chase the best light (early morning and late afternoon), but it meant that we often arrived in locations before the majority of locals were out of bed. The brick factory was no exception; other than a family of dogs who barked suspiciously at our presence, sensing that we were somehow strange or different than the people they were accustomed to seeing, there was no sign of movement. 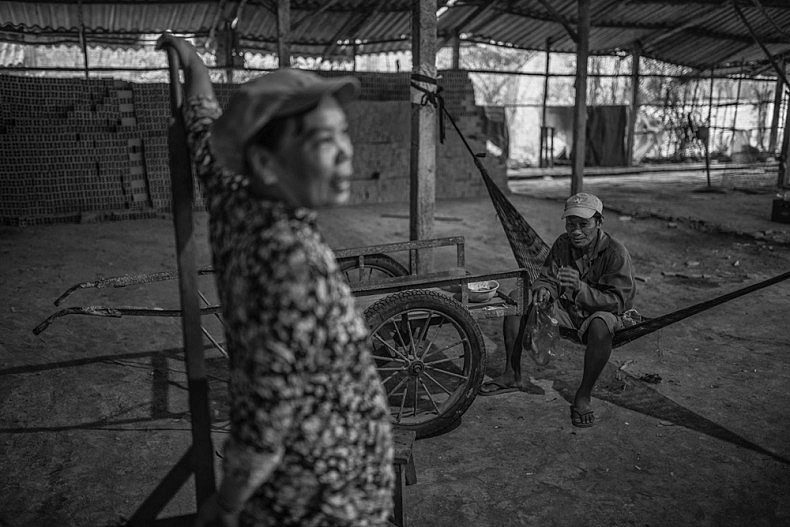 We walked slowly among the neatly stacked rows of drying clay bricks, moving with exaggerated quietness as one might do when sneaking around a creaky house, all the while listening for the angry shout of a security guard or wary factory owner. When we did manage to find people inside the gloomy structure, however, we were met with kindly smiles and warm handshakes from an elderly man and his wife. Sa Dec’s brick making techniques, it seemed, were not top secret.

The man, who did not volunteer his name, confirmed our suspicions that we were were in fact too early by over an hour. He and his wife, who slept on a bare wooden bed frame inside the factory, were preparing to stoke the kilns — but we would have to wait if we wanted to see the actual manufacturing process. As we watched him pour basket after basket of rice husks into an elevated hopper that fed the kiln fires, we took the opportunity to glean some background information from him. What we discovered was a manufacturing process that quite literally turned the Mekong’s water into houses. 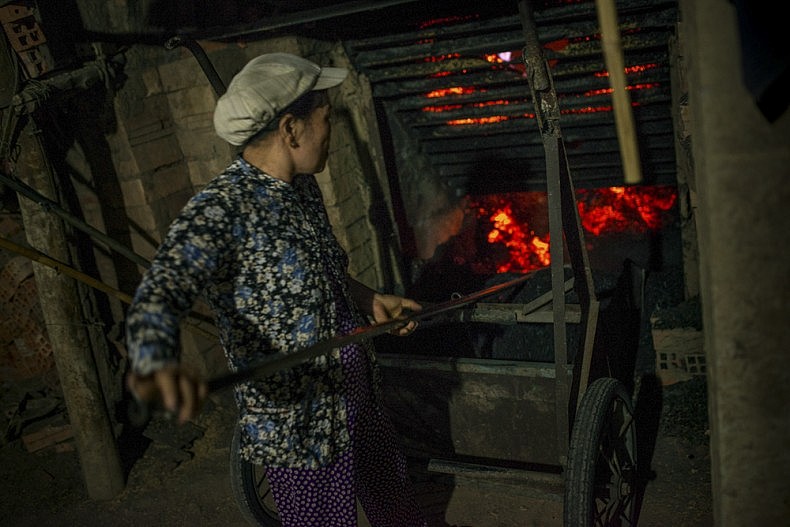 A worker stokes a fire under one of the factory’s kilns. Photo by Luc Forsyth.

It all began with water and rice, he said, hoisting a 25 kg basket onto his shoulder with a strength that belied his age and slight frame. First came the rice, grown throughout the delta in some of the highest quantities in the world, all of which owed its survival to river water that was diverted to farmland via Vietnam’s staggeringly complex network of man-made canals.

Once the crops were harvested, the rice grains were separated from their nutritionally useless husks before being transported to large wholesalers, who then sold it throughout the country and to the world beyond. The discarded husks were then loaded onto transport ships and delivered to Sa Dec’s brick factories, which burned up to six tonnes of the material every day. With each kiln roughly 30,000 square meters in size and holding roughly 150,000 bricks each, it was easy to see how fuel was needed on such a large scale.

Once the husks had given all their remaining energy to the hungry flames of the massive kilns, the charred remnants were shoveled into wooden carts and dumped in great black mounds behind the factory. I had already noticed the piles earlier that morning, but had wrongly assumed (perhaps because I hailed from a western country where materialism and disposability reigned supreme, everything discarded once it ceased to be bright and shiny) that the material was useless. As it turned out, the burnt husks were destined for gardens and farmland throughout the delta where they were used enrich the soil that would give birth to the next crop of rice. 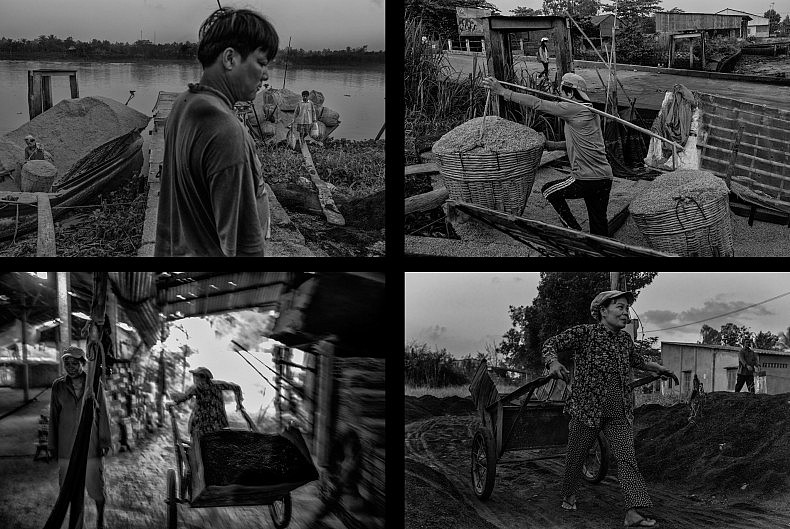 Workers unload rice husks for the kilns (top) and a worker takes burn husks out of the kilns (bottom.) Photos by Gareth Bright.

As ingenious as this organic recycling process seemed, the kiln’s fires would have been meaningless without bricks to fill them. Though there are many complex methods for creating bricks, the simplest and most economical process requires just two ingredients — water and clay, both of which were sourced from the Mekong. The soft mixture was hydraulically pressed and cut into the appropriate shape and length before being sent to the furnaces. 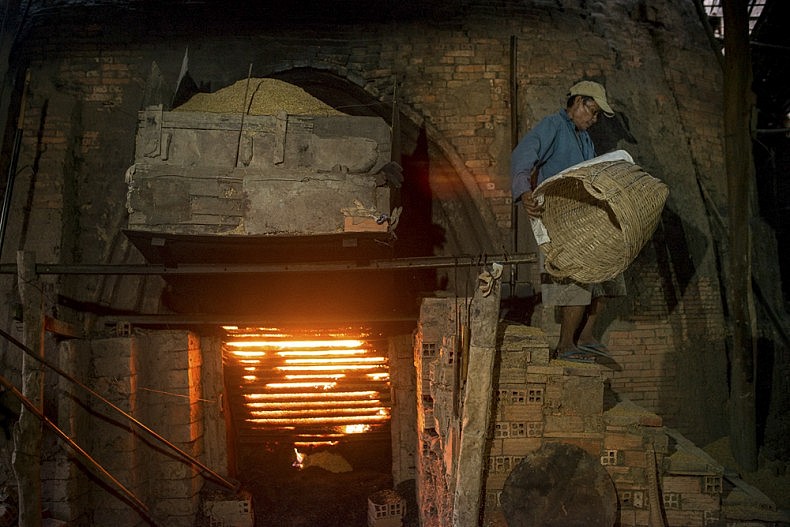 A worker carries a load of rice husks to a hopper which feeds into one of the factory’s brick kilns. Photo by Luc Forsyth,

After a month of hardening inside the immense kilns, the fired bricks were stacked into interlocking towers before once more returning to the river in the holds of transport ships that carried them to regional construction sites. From raw materials to fuel to transportation, everything in the brick factories of Sa Dec was tied to water. In an alchemically roundabout way, we learned, it was possible to build a house out of water. 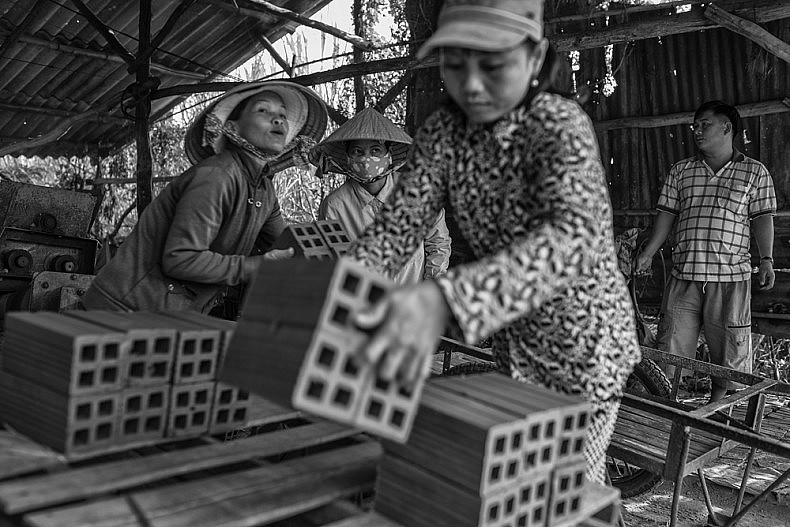 Workers move freshly cut bricks onto a cart before moving them into the sun to dry. Photo by Gareth Bright.

An hour later, our foundational knowledge of brick making greatly expanded, the rice arrived. Predictably, it came by boat. Two sagging barges, their holds impossibly full of rice husks, pulled up to the factory’s concrete pier and extended wooden gangplanks to the shore. Teams of men then set about the Atlas-like task of offloading three tonnes of rice husks using nothing but woven baskets and a yoke stick. From their boats to the factory’s cavernous room that served as the fuel storage area was less than 200 meters, but within a few minutes they were all sweating profusely. 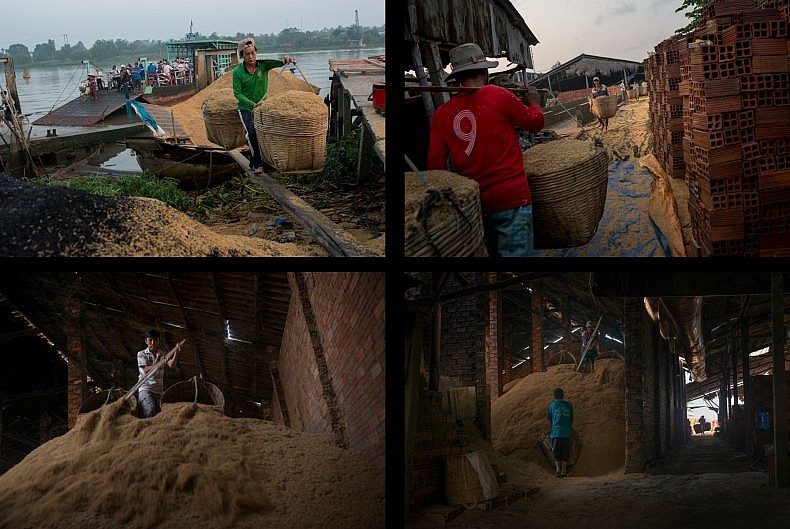 Workers unload rice husks from a boat on the river. Photos by Luc Forsyth.

With a touch of hubris, Gareth and I decided to try and impress upon the laborers that, photographers though we were, we could still do a hard day’s work. Almost immediately after hefting the 50 kg load onto my shoulder I knew that I had dramatically overestimated my physical abilities. The suspended baskets swung wildly as I took the first few steps, causing me to stagger drunkenly, much to the satisfaction of the watching workers. Determined to save as much face as possible under the circumstances I tried (badly) to adopt a look of relaxed confidence, when in reality my shoulder was screaming for respite and I was powerless to stop my own forward momentum. Pride, however, proved to be a powerful motivator and somehow I made it to the top of the husk pile where I gratefully dropped my load. 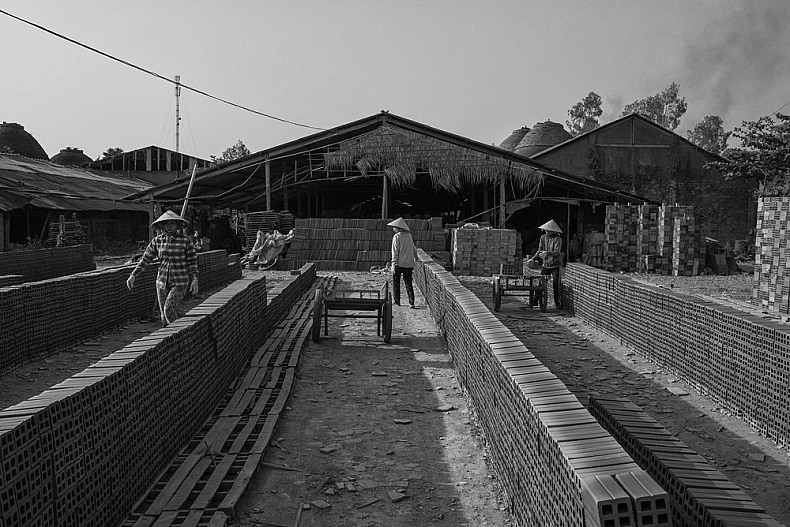 The brick factories of Sa Dec pump clay and water from the Mekong river, which they form into molds before firing them in kilns fueled by rice husks grown from river water. Photo by Gareth Bright.

Pretending not to notice the smirks from rest of the workers, whose faces showed none of the signs of extreme strain I was sure mine had, I walked back towards the dock to retrieve my camera. Gareth had just hefted his own baskets for the first and looked to have realized, as I had, how weak we were compared to these men despite our substantial height and weight advantages. “Did you carry yours all the way?” he asked. As I nodded my head I empathized with the look of dread that settled over his face.

By the end of the morning, the rice husks had worked their way into every possible area of our clothing. Had there been actual rice grains rather than the empty husks, I would have been able to feed a very hungry man from the quantity gathered in my shoes alone. 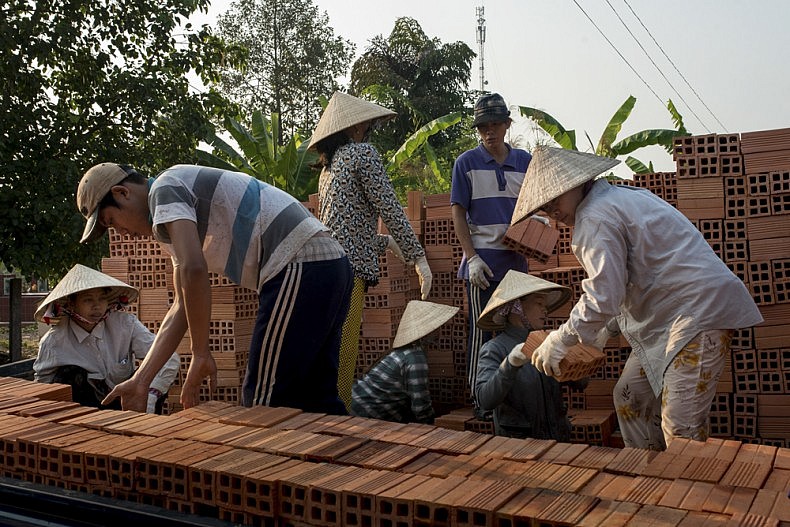 Workers load finished bricks onto waiting trucks so they can be transported to local construction sites. Photo by Luc Forsyth.

Though the day may have deflated our manly egos, we left the factory with a newfound respect for the ingenious ways delta residents were able to harness the Mekong’s resources.