“Sure, you get to play the hero,” Gareth said as he watched me try to persuade a group of passing children to accept the rainbow-colored ice cream cone. The afternoon sun had been sapping our energy for the last few hours and the ice cream seemed like a wonderful idea until the moment we discovered it was durian-flavored. Gareth, who loathed the spiky fruit with all his heart after having it regurgitated unceremoniously into his lap by an intoxicated man on a Thai train several years ago, looked crestfallen at the discovery and handed it off to me to with the resigned sadness of a child forced to give away a favorite toy. 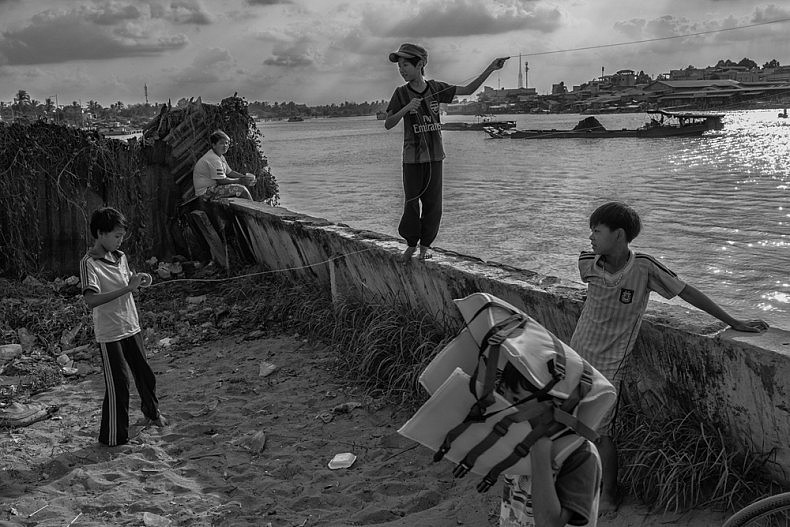 Residents of Fisherman’s Village fly kites in the afternoon in the city of Can Tho. Photo by Gareth Bright.

We were in Can Tho, Vietnam’s fourth largest city and the de facto capital of the Mekong delta. We had based ourselves out of Can Tho for nearly a week, driving into the surrounding countryside each morning and afternoon, but spent very little time exploring the city. With a population of nearly 1.5 million people straddling the Song Hau river (one of the main Mekong distributaries running through the delta), Can Tho was a logical place to investigate the stories of the river in an urban context. 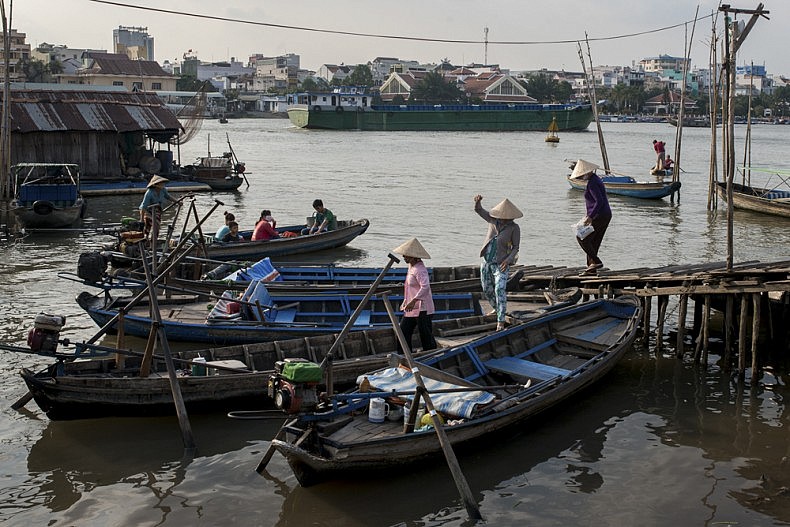 Passengers disembark from a water taxi in the city of Can Tho, the economic and commercial hub of the Mekong delta. Photo by Luc Forsyth.

The most obvious place to start was the Cai Rang floating market, a fixture of the city and one of the main tourist draws. We chartered a small boat to drive us through the floating maze of fruit and vegetable wholesalers, hoping to hear some first-hand stories about the role the river played in daily life, but after an hour on the water we were thoroughly exasperated. In contrast to the friendly openness of nearly everyone we had encountered on our journey thus far, the vendors in Cai Rang seemed weary of foreign cameras — and for good reason.

There were more tourists in the market than legitimate customers, it seemed, and everywhere extendable selfie sticks thrust GoPro cameras into the faces of the marketeers. Ranging from single-passenger boats no bigger than a canoe to ten meter barges packed to the limit with zoom-lens toting photography enthusiasts, the tourists seemed like digital vultures picking over an exotic animal. Since most of these people were not interested in buying any of the proffered produce, an antipathetical mask was settled over the faces of the majority of vendors: Take your pictures and leave so there is room for real shoppers. 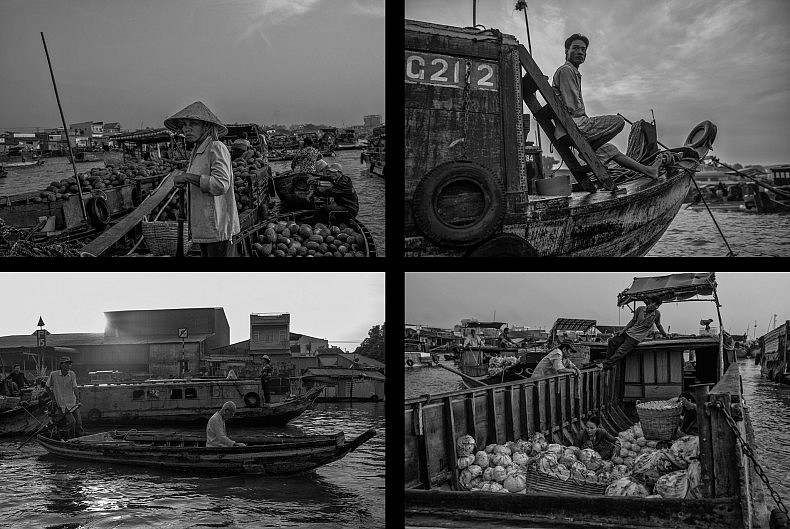 Morning scenes on the Mekong in Can Tho’s bustling floating market. Photos by Gareth Bright.

Considering that the entire purpose of our trip was to visually document the lives of people living along the Mekong, we were in no position to criticize anyone over a passion for photography. But in terms of a place to tell authentic stories about the interaction between people and waterway, Cai Rang was a disaster. We cut the tour short, much to the delight of the boat driver, who had been guaranteed a fixed price, and made for the opposite bank of the river to a community known as Fisherman’s Village.

When the ferry dropped us off an hour later, Gareth pointed excitedly to a small cart near the jetty: “Some ice cream would be amazing right now.” 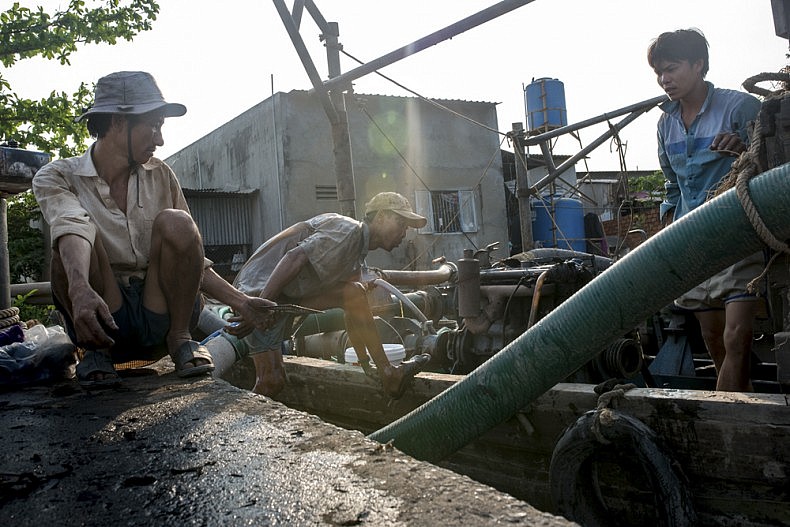 Workers clean parts of an engine in the river in the city of Can Tho. Photo by Luc Forsyth.

“When the electric nets arrived, the whole village went down together,” a 70-year-old man (whose name has been lost to a wet notebook) told us. Fisherman’s Village had been named (somewhat ironically as it would turn out) because of its location next to a prime fishing ground, but the introduction of electrified fishing nets in the 1990s ravaged stocks to their breaking point. Though the government had long since made the nets illegal, the retired fisherman told us, more than 20 years later the wild fish population still hadn’t come close to rebounding. 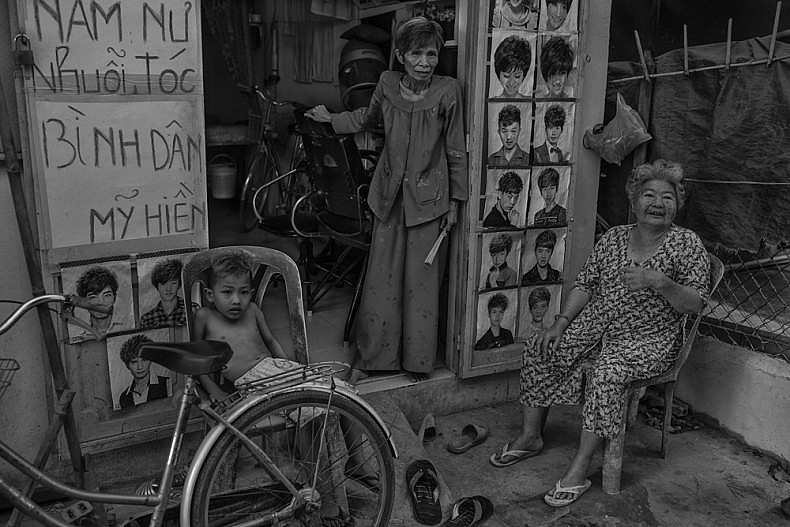 A family in front of their home and family-run salon in the neighborhood of Fisherman’s Village in the city of Can Tho. Photo by Gareth Bright.

“We used to be able to catch fish with our bare hands,” he continued, “but now they have to be farmed. [Though] wild fish are worth more and taste better, there are not enough of them to make a living from.”

Later we met Phuong, a 52-year-old former businessman who had left his job for the simpler lifestyle of fish farming, and he reiterated much the same thing; there were no fish left to catch. By contrast, under the damp floor planks of the wooden structure that floated above his fish pens were around 20,000 silver pompanos. To keep them healthy in such large numbers (he said there were roughly 200 of the fish for each cubic meter of space), Phuong had to regularly dose them with antibiotics. As the prospects of river fishing were all but nonexistent, this was a small price for him to pay for a dependable source of income. 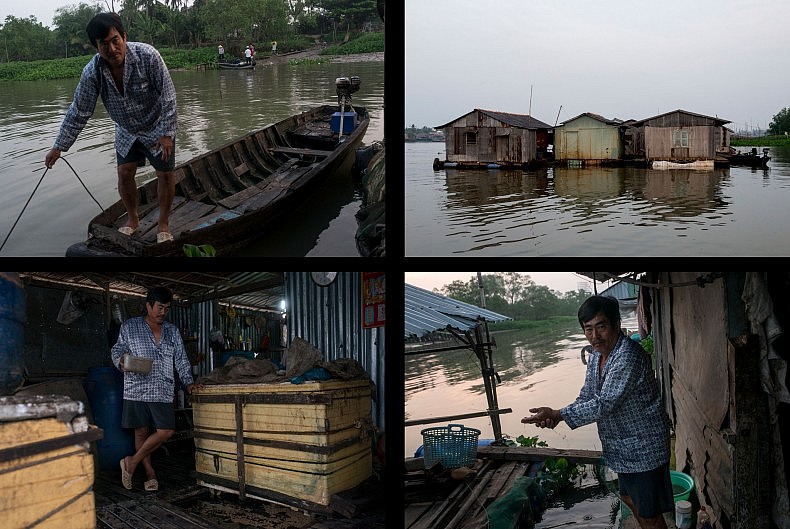 Phuong was a businessman before leaving the corporate world to start a floating fish farm near the city of Can Tho. Photos by Luc Forsyth.

With the absence of fish, Fisherman’s Village had evolved into something akin to a retirement community rather than a haven for hardworking fishermen. Though we came across several small engine repair shops and boat repair facilities, the vast majority of the area was residential. In an attempt to rebrand itself as a quieter alternative to Can Tho’s main tourist district, those residents of the village whose properties faced the river had constructed flower gardens in the space that was once occupied by fishmongers. And people flew kites. 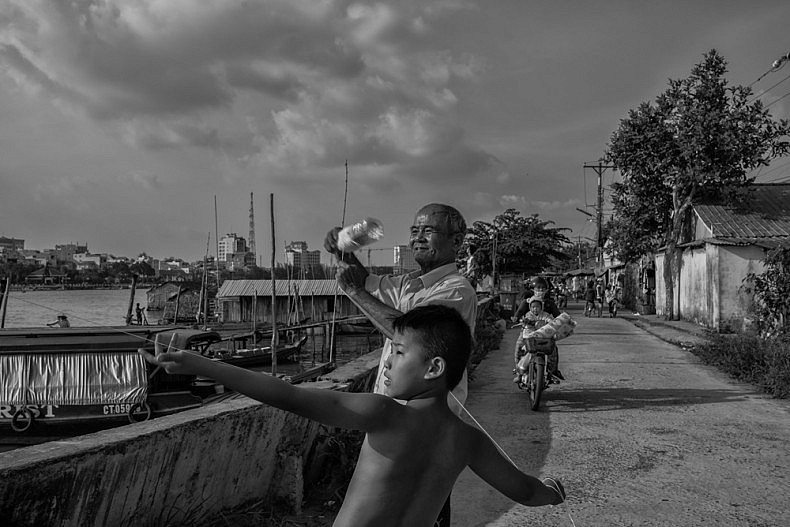 Residents of Fisherman’s Village fly kites in the afternoon in the city of Can Tho. Photo by Gareth Bright.

Kite flying, a popular pastime throughout Southeast Asia, was particularly prevalent in Vietnam. In Fisherman’s Village, they were everywhere. Young children and grandparents alike lined the riverfront in the afternoons, squinting into the setting sun as they tugged at the lines, fighting for height. From cartoon likenesses of sharks to incomprehensibly complex splashes of color, there was no shortage of variety among the fluttering shapes. 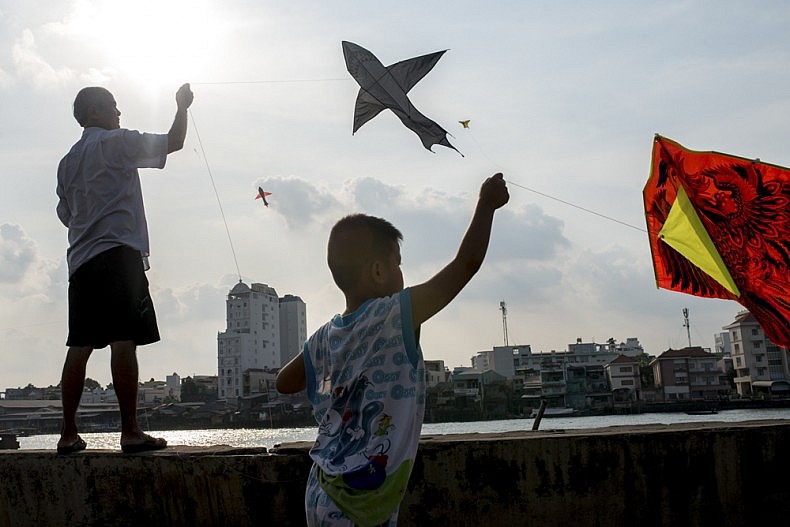 Residents of Fisherman’s Village fly kites in the afternoon in the city of Can Tho. Photo by Luc Forsyth.

Ultimately Can Tho was a city very much connected to water, but when more than a million people draw on a river’s resources without oversight or planning, things cannot end well for the river. In Fisherman’s Village we had seen that there was only so much a waterway could give before it faltered, leaving the people who once depended on it with little to do but fly kites.

The Toxicity of Agriculture

In rural Vietnam we discover a disturbing connection between agricultural productivity and Mekong river pollution.