“I’ve been fishing here for more than ten years, and the plastic has always been like this,” Giau told us as she sorted through the pile of fish, which was pathetically small considering the enormous size of the net she had emptied them from. With deft fingers she sorted through the catch, picking out the most valuable shrimp and fish first before working her way through the less prized species until only a few minuscule creatures remained, flopping amongst an assortment of plastic bags and food wrappers. I counted two Nescafe packets, three shopping bags, an empty package of instant noodles, and a cigarette butt. In total she had kept around ten fish. 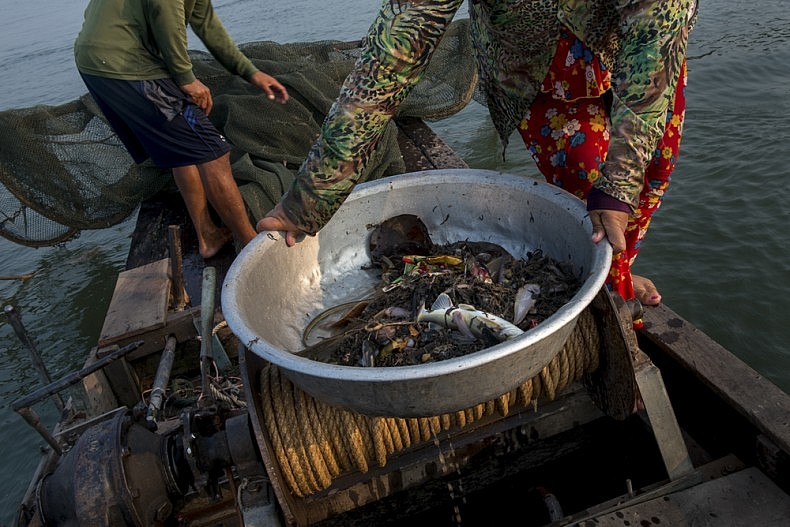 Plastic is mixed in with each net of fish. In some cases, the amount of plastic debris outnumber the fish. Throughout Vietnam’s Mekong delta, locals report drastic decreases in the numbers of fish being caught in the river. Photo by Luc Forsyth.

We had come to the island community of Long Binh early that morning with the goal of finding at least one person who was deriving their entire income from fishing the Mekong. After nearly three weeks following the Mekong through southern Vietnam, we were running out of time to disprove what we had heard over and over again throughout our trip: that the river no longer supported a large enough wild fish population to sustain the people who lived on its banks. With just a few days remaining until we had to cross the border into Cambodia, we had agreed to give Giau and her husband Bich the equivalent of $10 to pay for the morning’s fuel in exchange for passage. 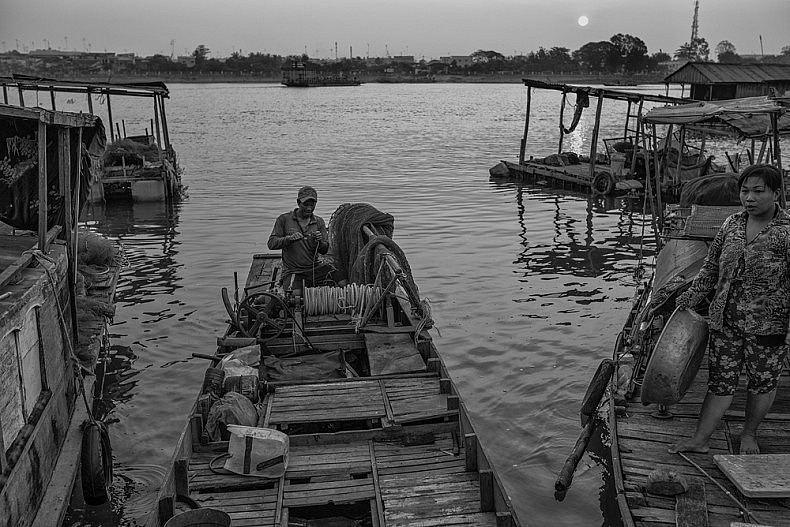 Bich, a professional fisherman, repairs wires in his boat’s engine before heading onto the river to fish. Photo by Gareth Bright.

As we motored into deeper waters, the sun barely above the horizon, it was clear that the couple was not exactly thrilled at the prospect of having us on board. Bich, who was perhaps not the most talkative of men to begin with, seemed reluctant to answer any of our questions and instead silently smoked cigarettes as he worked the small boat’s engine and tended to the nets. Giau was more obliging and did nearly all of the talking, but only, I suspect, because we were seated around the hatch of the fish hold which she needed to access. If it had been possible to get her job done without interacting with us at all, I imagine she would have been all the more happy. 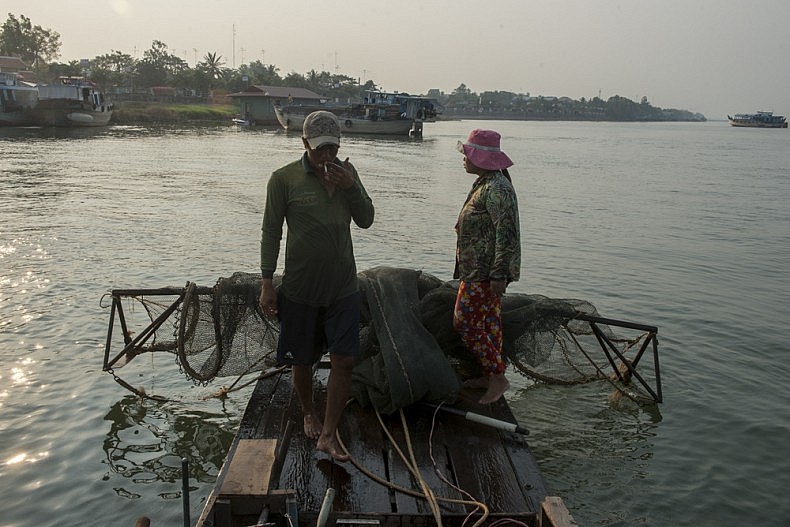 Giau and Bich pull up their nets, which are mostly empty. Photo by Luc Forsyth.

That isn’t to say that Giau and Bich were inherently rude or unfriendly. They had a difficult and tiring job to do, and judging by the meager catches they had pulled in, times were not overly profitable. The presence of two bulky foreigners on their cramped boat was likely not helping.

After two hours on the river, Bich steered the vessel back towards land, the effective window for morning fishing apparently closed. Though we couldn’t tell exactly how many fish they had caught, it was obvious that they would not be earning much from their efforts. The largest fish of the day was less than ten centimeters long. Clearly the river’s most bountiful days were over. 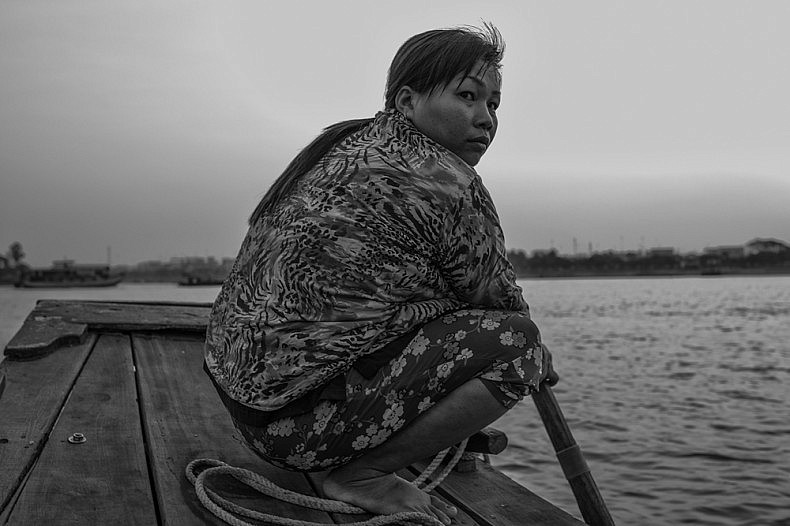 Giau helps navigate the boat up the river. Photo by Gareth Bright.

The End of Plenty

“Seven or eight years ago I noticed a dramatic drop in the number of fish I was catching in the river,” Ngo Than Thai told us. A 50-year-old man with a welcoming smile, we met Thai almost immediately after getting off Giau’s boat. Spotting us walking away from the cluster of fishing boats, Thai had beckoned for us to follow him further inland. After a few minutes of uncertain walking (he had not yet told us why we should follow him), we approached a series of massive ponds. After visiting several shrimp farms earlier in our trip, we knew that the pools most likely had something to do with seafood, but nothing more certain than that. 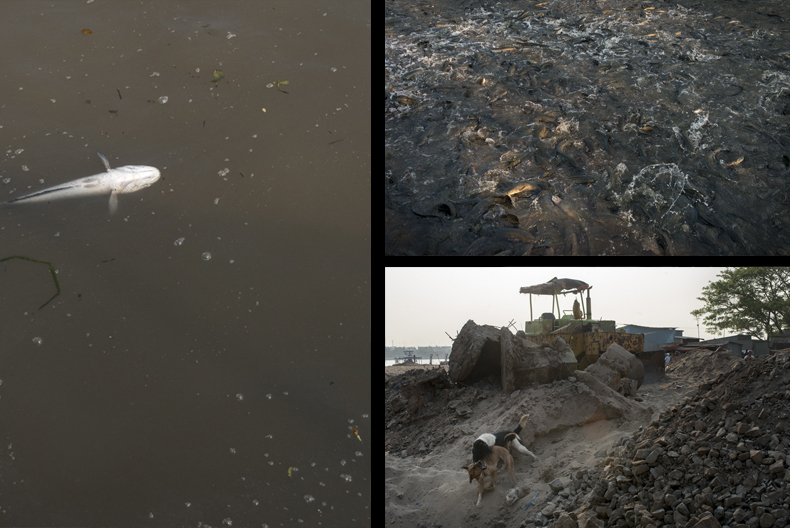 A dead fish floats in a pond while in another a large number roil wildly; nearby new ponds were being constructed. Photos by Luc Forsyth.

“I started fishing when I was 15 years old but it became impossible to make enough money fishing in the river. So three years ago I built these,” Thai continued, gesturing to the ponds. After he shouted something that we didn’t understand, two young men scrambled onto a wooden dock that extended over the surface of the nearest pond, carrying 50-kilogram sacks of fish food over their shoulders. No sooner had they set the bags down then the water exploded into life, roiling and bubbling furiously.

Initially it was hard to tell what we were looking at, so frenzied was the burst of movement just below the water’s surface. As the fish started leaping a meter into the air in anticipation of the feast to come, Thai explained more fully. After nearly 30 years of fishing in the river, the catches had dwindled so low as to make it impossible to support his family. Turning away from the water that had supported him for most of his life, Thai borrowed $5000 to build his first fish farm. Three years and two more ponds later, his fortunes have soared. 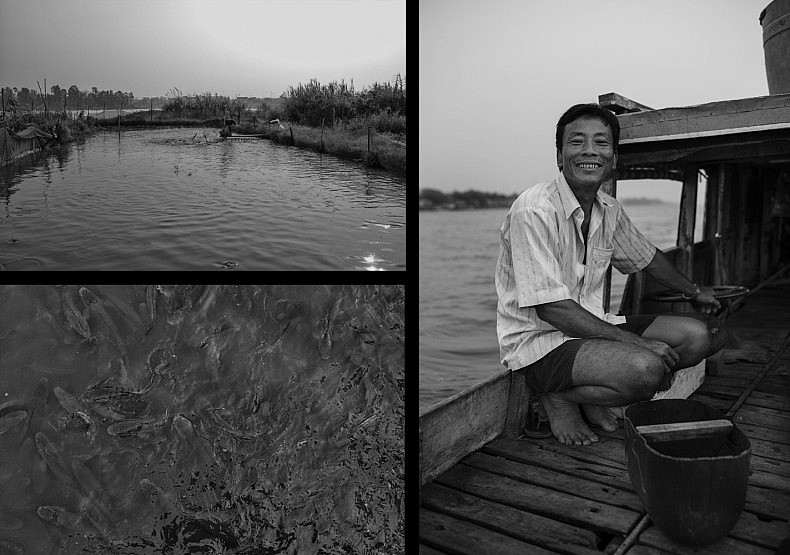 A smiling Ngo Than Thai and his ponds. Photos by Gareth Bright.

“I am making much more money than I ever did before. Each of these ponds has around 45,000 fish in them, and they are much bigger than those left in the river,” Thai told us. And it was hard to dispute his claims after what we had seen on Giau and Bich’s boat earlier that morning. Thai’s fish were huge by comparison – at least a foot long, shimmering and fat.

His transition from river fisherman to inland farmer has been so profitable that his neighbors are emulating his success and everywhere around us new ponds were being excavated. Like Thai, the other residents of Long Binh were rushing away from the river to fish inland, where the money was.

“I haven’t fished from the river in years,” Thai said. “Since I started these ponds, I haven’t been back.” 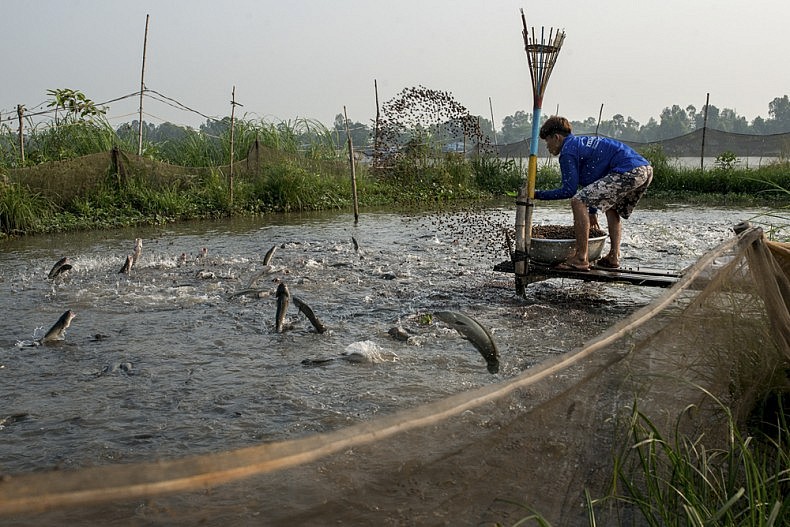 Fish jump from the water of an inland farm during the afternoon feeding. Throughout Vietnam’s Mekong delta, locals report drastic decreases in the numbers of fish being caught in the river, and some are abandoning the Mekong altogether to build more profitable fish farms further inland. Photo by Luc Fosyth.

After three weeks of exploring the relationship between the Mekong and the millions of Vietnamese who depend on its flow, this was perhaps not the most uplifting end to our time in the delta. Though over the course of our trip we had seen many ways in which people lived from the river, the overall picture was not of a healthy waterway.

From tourist ferries to brick factories to shipyards, the people who seemed to be profiting most from the river were those who didn’t rely on its natural gifts. For people who counted on an ecologically thriving Mekong to survive, the future seemed grim. The abundant use of agrochemicals had made most of the water unfit for bathing, let alone drinking or cooking; eroding banks were threatening farmers near the coast; fish stocks had been decimated by the use of electrified nets. After millennia of sustaining life, it seemed as though the river was breaking under the ever-growing demands of humanity. 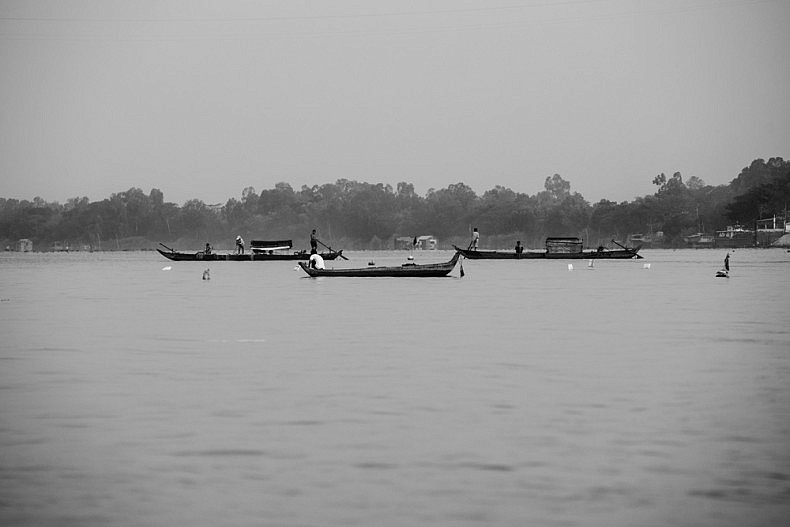 Though the future is not set in stone and there is always hope for a less destructive relationship between society and nature, as we drove towards the border station at Chau Doc, both Gareth and I were shaken by our experience in Vietnam. While the people we had met were nearly all warm and their culture welcoming, the overriding narrative was of a waterway under siege.

With four more countries to visit and roughly four thousand more kilometers of river to travel, there was a lot more river ahead. Would we find a similarly embattled ecosystem as we headed towards the Mekong’s source on the Tibetan plateau? Was Vietnam doing something wrong in its stewardship of the delta, or was it simply at the mercy of geography – destined to bear the brunt of four rapidly developing economies upriver? Only time would tell.

In the Mekong Delta: Erosion, Pollution, and Millions of Shrimp

Dominion of the Sea

After reaching the Mekong's terminus, we join a shrimp fishing crew to explore the sea's importance at the river's end.