The Retreat of the Data Localization Brigade: India, Indonesia and Vietnam

‘I Could Never Trust Them’: The China Factor in Taiwan’s Youth Vote

“It’s not going to be worth it,” Gareth shouted at me as I crouched unsteadily on a 3-inch-wide bamboo pole stretched across a mud-brown irrigation canal. With barely suppressed happiness he added, “I’m going to walk just down there, where there are actually people doing stuff.” And then as a parting afterthought: “I bet your legs are getting pretty tired.” 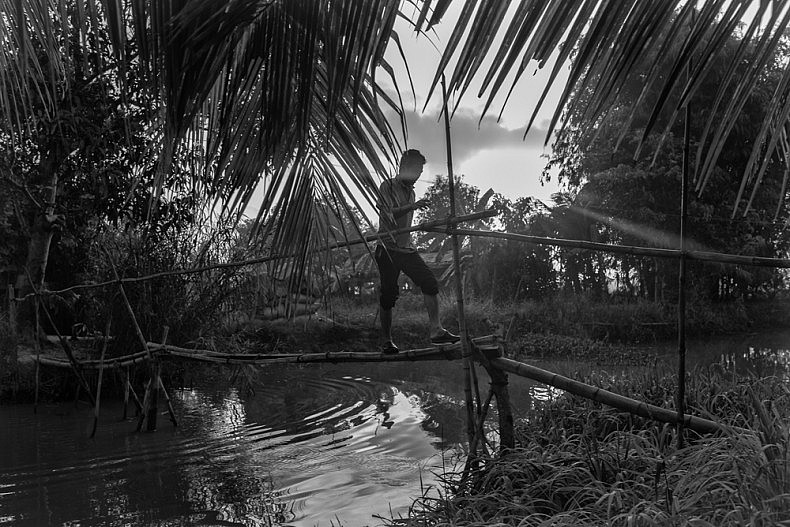 A man crosses a bridge over one of the many irrigation canals that run between the farmlands in one of Vietnam’s farming areas. These canals are polluted by the runoffs from chemicals that enter into Vietnam’s irrigation network and from there spread downstream into the Mekong river. Vietnam is one of Southeast Asia’s largest exporters of agricultural products, and farmers often use heavy quantities of agrochemicals to ensure high crop yields. Photo by Gareth Bright.

Sarcasm aside, he was right; I had been balanced on the rickety bridge for nearly 20 minutes and had lost all sensation in my right foot as I stubbornly waited for someone to cross a similar bridge further up the canal. It was another ten minutes before anyone cooperated, and as I pushed the shutter I was pretty sure it would be an average shot — probably not worth it, though I would never admit it to Gareth. 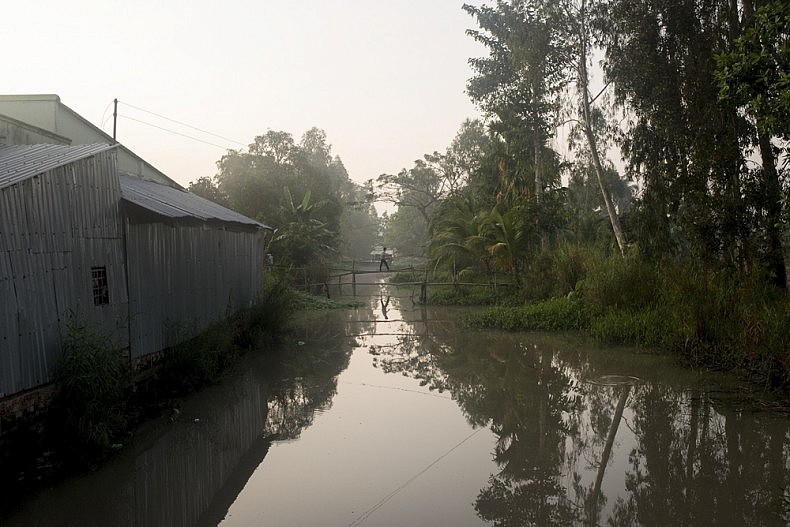 A man crosses a bridge over one of the many irrigation canals that run between the farmlands in one of Vietnams farming areas. Photo by Luc Forsyth.

We had driven into the countryside surrounding the Mekong delta’s economic capital of Can Tho with the intention of exploring the relation between agriculture and the river in an area known as “the rice bowl of Vietnam.” And considering that Vietnam was the world’s second largest exporter of rice, that was quite a bowl. Arriving in the deep blue gloom of the early morning, we’d had to wait for half an hour next to a roadside vendor selling cobs of boiled corn (though who was shopping for corn at 5 am we’d never know) before there were any signs of life from the surrounding fields. 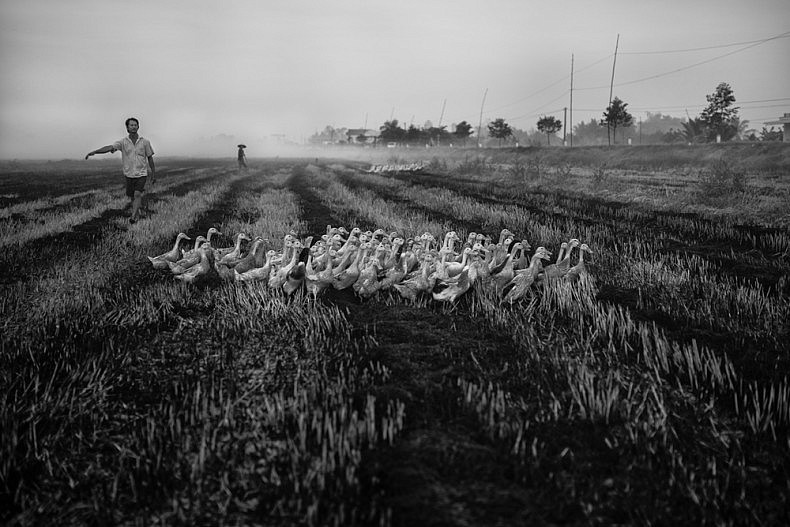 A farmer corrals his flock of ducks in the early morning on the outskirts of Can Tho. Photo by Gareth Bright.

The ducks came first. At least a hundred of them poured over the earthen embankment of a rice paddy and began waddling frantically over the field’s uneven contours, their ultimate destination unknown. Behind them came a farmer, the obvious cause of their flight, unrolling long sections of plastic fencing that he apparently planned to use to corral the birds. The indigo sky of an hour before had given way to a soft grey mist which obscured the horizon and muffled the sound from the nearby highway. Watching the farmer weave through fog, doggedly pursuing his flock as they shape-shifted amorphously like a school of sardines to avoid him — the scene was a postcard for an idealized vision of quaint agrarian life. As we shot pictures and tried to keep our feet out of the swampiest sections of the paddy, it seemed like we had found the perfect place to witness the natural and healthy connection between water and people. As we were to find out, however, this association was anything but. 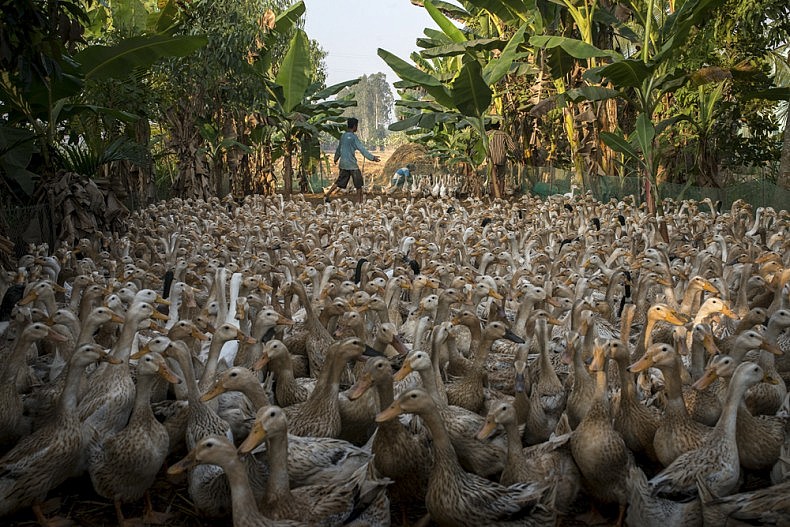 Roughly 2,000 ducks wait to be injected with antibiotics. With animals living in such high concentrations, injections are needed regularly to prevent infection. Photo by Luc Forsyth.

“Ummm, sorry guys,” Mi, our translator, said from a few meters away where she had been talking to the farmer. “You are actually preventing them from herding the ducks. He asks if you will please stop taking pictures now.”

Though this was the first time during the trip that we had actively spent time on a farm, the landscape had been almost entirely rural since we entered the country. Unlike neighboring Cambodia, the fields of Vietnam were a vivid green instead of the dead brown of the dry season. We had attributed much of the fertility to the immense system of irrigation canals that spread the Mekong’s waters throughout the delta, but even so, the harvests looked exceptionally verdant. The periodic sightings of advertisements for Monsanto’s Roundup, one of the world’s most widely used agricultural herbicides, should have given us some insight, but until we had spoken to farmers on the ground we weren’t even close to understanding the scope of the issue. 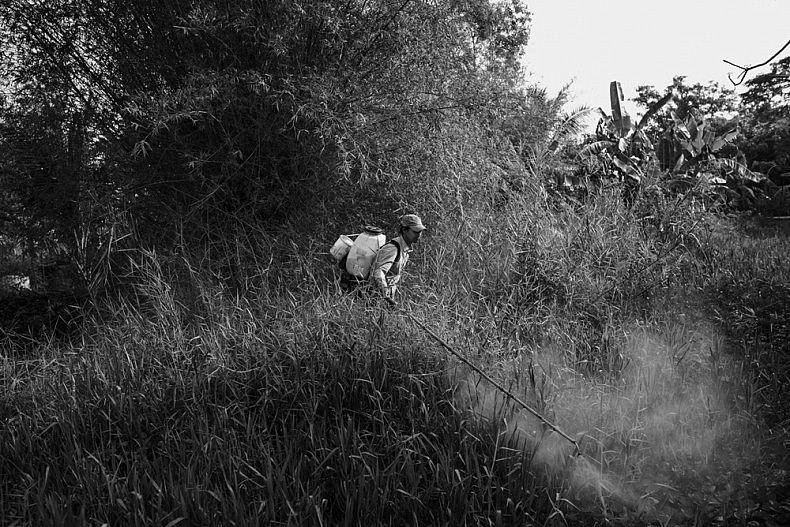 A worker sprays herbicidal grass killer. The runoffs of these chemicals enter into Vietnam’s irrigation network and from there spread downstream into the Mekong river. Photo by Gareth Bright.

“We have separate crops. One for selling, and one for eating,” said Lung, the owner of the farm we had wandered into. “The water from river is extremely important, because without it we could not farm here. But for anything else, we can’t use it — there are too many chemicals.”

Manh, a youthful looking 40-year-old man who worked in a neighboring field despite sporting a broken arm, said exactly the same thing. The delta’s farmers, who grow nearly half of Vietnam’s rice, would not eat the crops they sold. And though it is perhaps unfair to single out Monsanto (we found a wide spectrum of brand names printed on the herbicide and pesticide packets), the widespread use of agricultural chemicals was clearly a public health issue.

A farmer mixes agrochemicals in a spray pack before applying the mixture to his fields (L) and another poses with his sprayer (R). Photos by Luc Forsyth,

At a nearby watermelon plantation we stopped to speak to another farmer, Huynh, who candidly explained the necessity of chemicals. Since Vietnam’s economic reforms of 1986 — which abandoned the communist collective farming system of past in favor of a free market that incentivized farmers to increase crop production by allowing them to keep their profits — Huynh said that farmers were routinely harvesting three rice cycles a year.

Three generations of farmers take a break (L) and a portrait of Manh, a farmer in Can Tho (R). Photos by Gareth Bright.

“Before we could use this water for cooking and drinking,” Huynh told us, gesturing to a nearby creek, “but since we have started producing so much, we cannot. We have to use chemicals to keep the crops healthy. It is necessary, but it means we can’t use the water.” All the while we were speaking to him, workers in fields behind carried 40 liter backpacks filled with pesticide which they applied liberally to the young watermelons at their feet. Each time their packs were drained, they would return to the canal to dump out the remnants before mixing a fresh batch using the same water — which was connected directly to the Mekong and all its associated downstream tributaries. 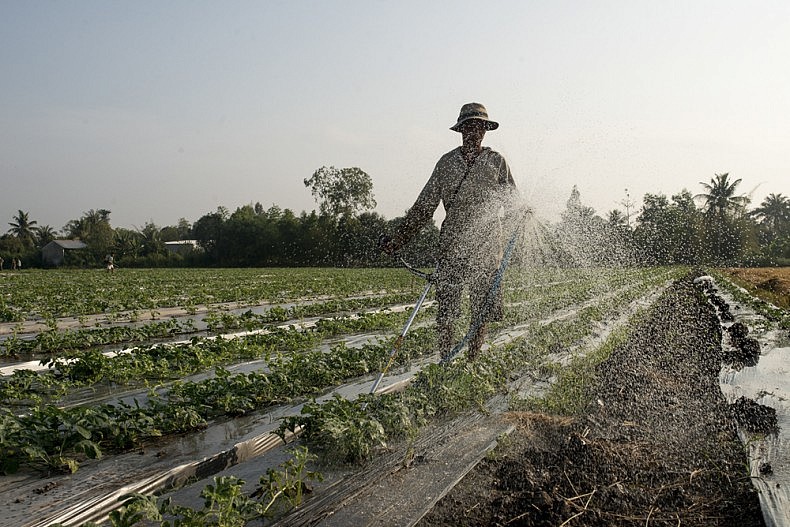 A farmer applies agrochemicals to a patch of watermelons on the outskirts of Can Tho. Photo by Luc Forsyth.

It would have been unfair for three outsiders, as we were, to sit in judgment of farmers who struggled daily to keep their families above the poverty line. We were simply passing through and would eventually return to our reasonably comfortable lives in Phnom Penh, while they would remain to support extended families on the revenue generated by their farms. We were in no position to deliver advice or reprimand, and made no attempts to do so. Yet as third-party observers who were committed to following the course of the Mekong for most of a year, it was difficult for us to see the practice of steadily poisoning the water supply that nurtured their crops and kept their livestock alive as anything but a mistake that would have disastrous ramifications in the future.

Thinking of Tan Van Vu, a shrimp farmer living far downstream who reported a 40 percent decrease in his productivity due to a mysterious sickness that had spread through this ponds, we left the workers to their spraying. Though we had no scientific proof that there was a connection between Vu’s poisoned shrimp and the chemical residue that floated in the water in these farms, we knew that whatever was put into the water here would inevitably make its way downriver to him. 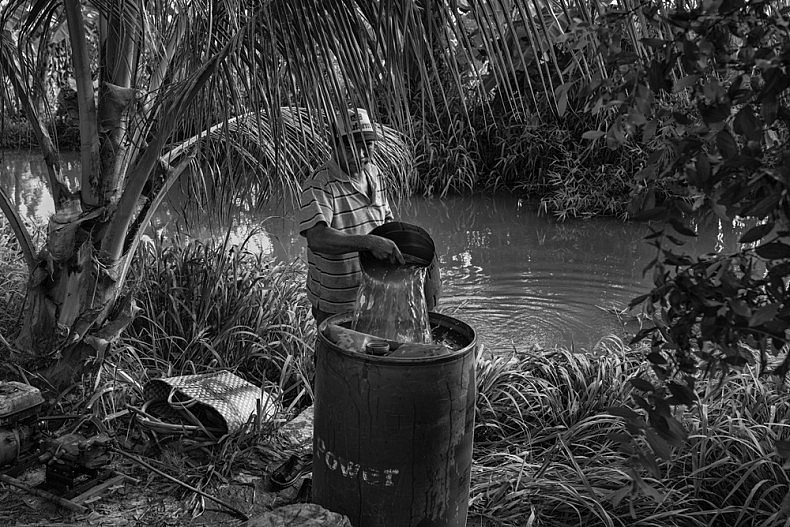 A man collects water from one of the irrigation canals that run between the fields. Photo by Gareth Bright.

Back on the side of the highway we sat down at a roadside cafe for a quick shot of morning coffee. When we told the curious cafe owner that we were following the Mekong from Vietnam to its source in China, she smiled reminiscently: “I used to love swimming in that river. But now it makes my skin itchy.”

‘‘The law and its implementing regulation still lack implementation details on how to protect the legitimate rights and interests of foreign investors.’’

Japan’s appeasement policy toward Myanmar, driven by geopolitics and disregard for human rights, is supporting the Rohingya genocide.

Is Beijing building a cross-border social engineering system, one software solution at a time?

What’s Next for Cambodia’s Opposition Politics?

After a big week for the country’s opposition, a look at what may lie ahead for it as well as Cambodian politics more generally.

Consistent nonproliferation messaging: how can the United States square its Iran strategy with its North Korea strategy?

Nafosat Olloshkurova's decision to leave Uzbekistan reflects just how far the state has yet to go with its reforms, particularly regarding free speech.

A Lukewarm Commitment: India and Gender Equality in Security Affairs

India can do much more to support the women, peace, and security agenda.