With Recent Coup, Myanmar’s Military Diverges From the Indonesian Path

The Lao Airlines Airbus A320 lifted off at approximately 8:10 a.m. from Gimhae International Airport (PUS) and flew towards its destination, Wattay International Airport (VTE). As reported by Air Transport World, Chinese air traffic controllers instructed Flight QV916 to turn back just as the civil aircraft approached the ECS ADIZ. Lao Airlines complied and returned to PUS. 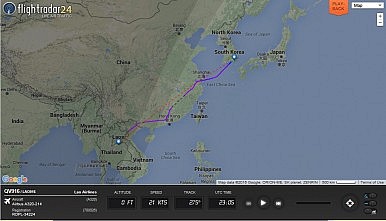 Some observers have interpreted this chain of events as a case of first instance wherein China was able to effectively impose the ECS ADIZ on a non-compliant foreign commercial flight. An ADIZ is an area of airspace, adjacent to but beyond the national airspace and territory of the state, where aircraft are identified, monitored, and controlled in the interest of national security.

Even as many countries, including the United States, have refused to recognize the ECS ADIZ, they have permitted their national air carriers to comply with the security zone’s rules in order to maintain the safety and order of international civil aviation. China claims that over 50 foreign air carriers have adhered to the ECS ADIZ. Notable exceptions include Japanese air carriers, as Tokyo has instructed its commercial airlines to defy the ECS ADIZ.

Of course, Laos cannot be compared to Japan: Laos is not a major power with an overlapping territorial claim in the East China Sea. Nevertheless, the argument is being made that Flight QV916 represents a critical precedent and dangerous trend in the Asia-Pacific.

But was China able to bully a weaker state into complying with the ECS ADIZ? Is Flight QV916 reflective of Beijing’s increasingly aggressive posture towards neighboring states as witnessed in the East and South China Seas? Should the actions of Lao Airlines, a flag carrier of Laos, be interpreted as opinion juris and Vientiane’s acceptance of the ECS ADIZ?

Based on Beijing’s official response, the reported facts and circumstances of Flight QV916, and applicable international law, the best answer to each of these questions is “no.” The case of Flight QV916 is more likely attributable to established and mundane principles underpinning global aviation, and not evidence of a landmark moment under the contentious ECS ADIZ. 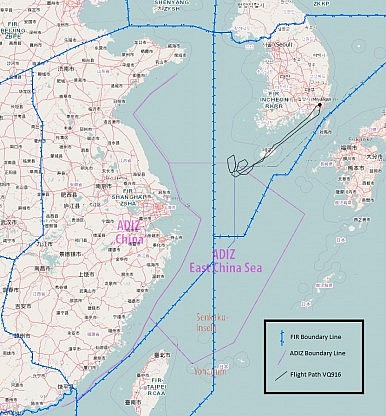 Beijing explained that Flight QV916, en route from South Korea to Laos, “attempted to fly over China’s airspace on Saturday without permission from the country’s aviation authority.” China unmistakably has the legal right to instruct and prevent a foreign commercial flight, which lacks prior permission, from entering China’s sovereign airspace. Article 1 of the Convention on International Civil Aviation (the “Chicago Convention”) codifies the fundamental legal principle that every state has “complete and exclusive sovereignty” over the airspace above its territory. Pursuant to the United Nations Convention on the Law of the Sea (UNCLOS), Article 3, the territory of a coastal state includes the territorial sea, which extends twelve (12) nautical miles. In the Nicaragua case, the International Court of Justice interpreted United Nations Charter, Article 2, to extend state sovereignty to “the internal waters and territorial sea of every State and to the air space above its territory.”

Unlike provided under the UNCLOS, there is no right of “innocent passage” for overflight of foreign aircraft, civil or state (military). Instead, the Chicago Convention, Article 11, authorizes the non-discriminatory application of laws and regulations relating to the “admission to or departure” of aircraft from the territory of contracting states. Compliance with such rules is necessary “upon entering or departing from or while within the territory of the state.” Under Article 6, special permission is required for scheduled commercial flights over the territory of another state. In practice, foreign aircraft must obtain clearance and overflight rights before entering and traversing the national airspace.

Here, the scheduled route of Flight QV916 indicates that Lao Airlines intended to enter and cross China’s national airspace. The route for Flight QV916 tracks across the East China Sea from South Korea and then directly across the Eastern portion of mainland China. That Lao Airlines did not obtain prior permission for its route is bizarre, but may be due to the fact that the air carrier was launching a new service from Pusan to Vientiane. Regardless, if Flight QV916 failed to obtain the requisite permission and overflight rights, then China had the right to deny entry into its sovereign airspace.

The controversy of Flight QV916, however, does not concern China’s administration of national airspace, but instead focuses on the extraterritorial assertion of Chinese authority above the East China Sea.

If Flight QV916 had nothing to do with the ECS ADIZ, as claimed by Beijing, then what authority is China relying upon when issuing instructions to a foreign airline beyond its territory? According to the Chinese Defense Ministry, Flight QV917 was prohibited “from entering Chinese airspace in accordance with its air traffic control regulations.”

The Chicago Convention and its annexes establish a regime for assigning to contracting states the responsibility for providing air traffic services, including airspace above the high seas. More specifically, through a regional air navigation agreement with the International Civil Aviation Organization (ICAO), states accept responsibility for ensuring the safe and efficient management of air traffic in Flight Information Regions (FIR) that include international airspace. Pursuant to Annex 11, the geographic scope of FIRs should correspond with the route structure and need for efficient air traffic control services, as opposed to national boundaries.

As the flight path indicates (see Figure 2), Flight QV916 turned around prior to entry into the Shanghai FIR. Confusion regarding which rules China applied to Flight QV916 may be due to the overlap between the Western boundary of the Shanghai FIR and the North-Northeastern edge of the ECS ADIZ. The timing of China’s instruction, however, to Flight QV916’s is not unusual given the standard procedures associated with filing of flight plans.

Beijing alleges that Lao Airlines submitted an “interim and vague” flight entry request and did not respond to requests for further information, so permission was not granted to the flight. Pursuant to the Chicago Convention, Annex 2, Lao Airlines was required to file a flight plan in advance of operating its international flight in order to obtain air traffic control clearances, among other permissions. Specifically, given the intended route of Flight QV916, Lao Airlines should have submitted a flight plan to the Chinese authorities at least 60 minutes prior to take off or, if submitted during flight, at least 10 minutes prior to entering the Shanghai FIR. Regardless, China was within its authority, as the contracting state responsible for providing air traffic services, to require Flight QV916 to meet these conditions.

Authority over air navigation services beyond a state’s territorial airspace is limited to technical and operational considerations for the safe and expeditious use of the concerned airspace. In other words, China’s extraterritorial authority within the Shanghai FIR does not affirm sovereignty claims or create national security rights. Notably, Flight QV916 voluntarily complied with Beijing’s instruction. China did not intercept the commercial flight – which would have merited serious concerns.

China’s FIR responsibility would not permit the interception of foreign military aircraft operating in international airspace located in the Shanghai FIR. The Chicago Convention does not apply to state aircraft – military, customs and police aircraft. Affirming this principle, on August 20, 1986, the United States, formally protested Cuba’s interception of a U.S. Coast Guard HU-25A Falcon operating in international airspace within a Cuban-administered FIR and rejected Havana’s claim that U.S. state aircraft were required to obtain prior authorization for such flights.

In contrast to FIRs, states claim that ADIZs apply to all foreign aircraft – state or civil – as a measure of anticipatory self-defense. What is curious about Flight QV916 is that China declined to assert the ECS ADIZ.

Chinese Restraint and the ECS ADIZ

The scheduled route of Flight QV916 signaled a clear intention to enter Chinese’ national airspace. Nevertheless, Beijing has specifically disavowed any association between Flight QV916 and the ECS ADIZ: Chinese air traffic control regulations “have nothing to do with the ADIZ.” Momentarily assuming the legitimacy of the ECS ADIZ, Beijing could have cited non-compliance with its ADIZ rules – such as failure to file a flight plan, or respond in a timely and accurate manner to identification inquiries – as the basis for turning back Flight QV916.

Chinese restraint may reflect sensitivity to the threat of international censure if the ECS ADIZ were used to disrupt international civil aviation. Indeed, following establishment of the security zone, China sought to assure foreign airlines that normal flights would not be disrupted. In contrast, China has sought to enforce the ECS ADIZ against Japanese military aircraft merely transiting the zone.

It remains to be seen whether Beijing, in applying the ECS ADIZ, is intentionally and consistently distinguishing between civil and state aircraft. What Flight QV916 most clearly reveals is that Beijing creates controversy in the East China Sea even when applying its ordinary responsibilities under the Chicago Convention. The ECS ADIZ has engendered an atmosphere of mistrust and misunderstanding. What has veered off course is China’s reputation.

Roncevert Almond is a partner at The Wicks Group based in Washington, D.C. He has advised government authorities in the United States, Asia, Europe, the Middle East, Africa, and Latin America on issues of international law governing aviation. The views expressed here are strictly his own.

“A developed and vibrant civil society is needed if we want to build a democratic society.”

So far, there’s been no repeat of the 2001 collision. But with tensions rising, some understanding is needed.

South China Sea: The Case Against an ADIZ

Setting up an air defense identification zone in the South China Sea would be an ill-conceived step for Beijing.

Japan and the ‘Maritime Pivot’ to Southeast Asia

Given domestic and regional realities, how involved can Japan be in the South China Sea?

Here’s what the international community can and should do about it.

Brave Girls hit it big after a viral video popularized a four-year-old song.

Over 200 Chinese ships occupied Whitsun Reef for several weeks. Only a handful remain.

After Myanmar’s Military Coup, Arakan Army Accelerates Implementation of the ‘Way of Rakhita’

Despite its support for the national protest movement, various factors have contributed to the armed group’s relative silence since the coup.

“I don't know if my children are dead or alive”: Uyghur parents share the anguish of being separated from their children.

With Recent Coup, Myanmar’s Military Diverges From the Indonesian Path

After Suharto’s fall in 1998, Indonesia's military did what Myanmar’s Tatmadaw needs to do, but won’t: relinquish an overt role in politics.

At the Biden-Suga summit, strong language on China, including a notable mention of Taiwan, was tempered by Suga's precarious situation at home.

What’s Going on at the Iran-Pakistan Border?

A crackdown on the thriving trade in smuggled Iranian oil could wreak havoc on local economies on both sides of the border.

Japan has been criticized for seeming inaction following the coup and ensuring crackdown. But there are hints Tokyo is taking action behind the scenes.

Engagement With China Worked After All

China’s sharp swing to the left under Xi surprised many. But rather than a new normal, his generation may be the last gasp of old-school Maoism in the country.