The rice fields surrounding Sakarpura, a village in Saptari District of Nepal’s southern Province 2, are covered in over a foot of sand. The sand was deposited during severe floods in August last year, when the nearby Khado Khola, a small river, breached a man-made embankment and swept into the area.

The answer to that question has as much to do with the physical world as it does with the world of politics and institutions. The Nepali government is now implementing a recovery program from the 2017 floods, which killed 134 and caused $584.7 million in damages across the country, including destroying over 40,000 houses, disrupting agricultural livelihoods, and damaging critical common infrastructure. But the country is simultaneously undergoing a decentralization process set out in the 2015 federal constitution and set in motion by recent elections. A variety of authorities — including powers related to education, healthcare, and disaster management — have been delegated to new local and provincial governments. The ongoing transition has been chaotic in the short-term, but many hope that decentralized government will eventually be an improvement over the centralized system that has prevailed for most of Nepal’s recent history. 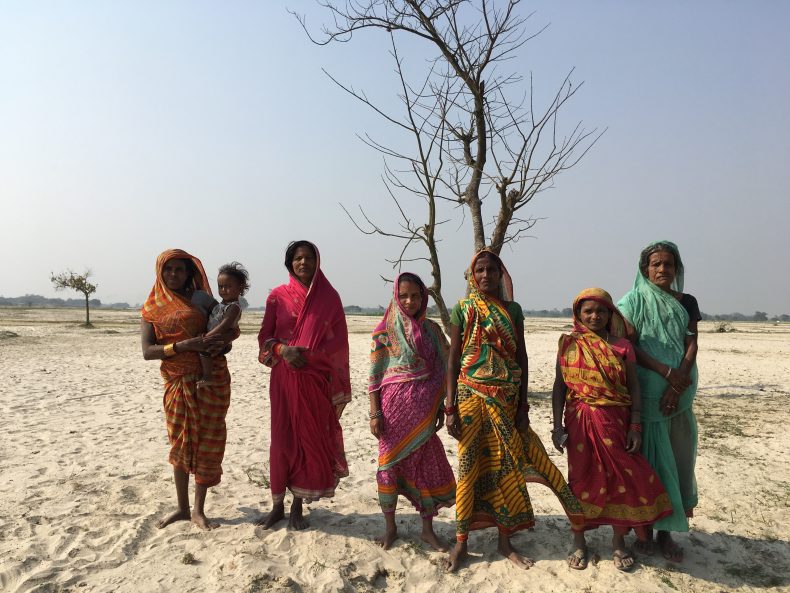 Women in Sakarpura village, Saptari, Province 2, where fields were covered by sand in the August 2017 floods. Photo by Peter Gill.

The authority for overseeing flood recovery is currently held by a small office inside a century-old palace in Singha Durbar, the central government complex in Kathmandu. The Flood Reconstruction and Rehabilitation Project, as it is called, is housed within the National Reconstruction Authority (NRA), which is the central institution charged with overseeing the ongoing reconstruction from earthquakes that devastated Nepal’s hills and mountains in 2015 (the recent floods, by contrast, were concentrated in the southern plains). The government’s approach to flood recovery is largely modeled on its approach to the earthquakes, incorporating lessons learned through that process.

Created early this year, the flood project is responsible for medium- and long-term recovery activities over three years, and it is, to date, funded entirely by the Nepali government. Over half of the project’s expected budget of $705 million will fund grants to families to rebuild their houses, while other major areas of expenditure include agriculture, road reconstruction, and other infrastructure. (Short-term relief efforts in the six months after the disaster were carried out by the Nepali government with funding and implementation support from a variety of UN and other international organizations, Red Cross societies, and local volunteer efforts.)

Dr. Suman Karna, the project’s director, holds a PhD in urban planning and was formerly an adviser to the NRA. Whereas the NRA’s work has been largely centrally-directed (partly because the earthquakes hit before decentralization began), Karna says he wants to utilize Nepal’s nascent decentralized structure for maximum benefit in flood recovery.

“We are going along with the change in governance structure,” he says, adding that he wants to put new provincial and local governments “in the driving seat” by increasing their capacities to manage and prepare for disasters.

“Every disaster is different – it has so much linkage with the geography, the economy, with the local society,” he says. “So it is important when we are dealing with disaster risk reduction, to be decentralized, because then only you will be able to give a solution or approach that is realistic, which people can abide by and own.”

But there is a long way to go to realize this goal.

At the time of the floods, Nepal was in the midst of elections, and local governments had yet to be formed in Province 2 — the southern plains unit where much of the flooding took place — and at the provincial level throughout the country.  As a result, recovery operations began using existing centralized systems under Kathmandu-based ministries. Although local and provincial governments were elected by December last year, they have yet to take a leading role in recovery.

As part of the decentralization process, most ministries are in the process of closing down their district field offices across the country, and they are transferring their staff to work for local and provincial governments. But in many cases, the budgets for flood recovery remain with ministries, which are reluctant to transfer them to the new local governments. This has created an unusual situation where ministries and their district offices have money but a lack of staff to implement programs, and conversely, local governments have staff but not the money to implement programs.

In Saptari District, for example, the District Agriculture Development Office (which belongs to the Ministry of Agriculture) has a budget of 60 million Nepal rupees (about $576,000) for distributing seeds, equipment, and various agriculture inputs to affected farmers, but has so far has been able to spend only 20 thousand rupees (about $192), or less than 1 percent of the total, due to lack of staff, according to the office head, Bhagirath Yadav.

“It’s a confusing time. Many things are not clear, and no one — not even the Prime Minister — can answer what will happen, because things are still evolving,” acknowledges Karna. He adds that he is still awaiting official approval for his own Project’s plan and budget, so that he can open field offices.

Delays due to decentralization aside, the flood recovery process faces other challenges.

Most government aid is due to be distributed according to victims’ lists (for housing damage, crop damage, livestock loss, etc) that were collated under the direction of central government staff in the weeks following the floods. At the time, local election campaigns were in full swing in Province 2, and many believe the victim designation process became politicized. This has led to setbacks in distributing aid. For example, due to doubts about veracity of the victim lists, some local officials have been reluctant to distribute an initial tranche of funds made available for families that lost housing, according to Bhagirath Pande, Saptari’s Chief District Officer, the top Home Ministry official in the district. (Ultimately, each family that lost a home is due to receive a total of 300,000 rupees under an owner-driven reconstruction model, on par with earthquake victims.)

Asked about this issue, Karna said that some revisions to the victims’ lists may be necessary, but that revisiting the lists on a large scale is neither necessary nor feasible.

Meanwhile, a recent UN-funded survey found that 39 percent of flood victims believe aid is not reaching those most in need in their communities. In some cases, poverty and landlessness can make it even harder for flood victims to get government aid. For example, most farmers were required to show proof of land ownership to register crop damage, effectively barring tenant farmers from accessing agricultural aid.

Karna says that in housing aid, at least, his project will include provisions for people who lack title to the land on which their homes are built. Following an adaptation made by the NRA to its earthquake recovery work, the project will likely include budgets to help landless people acquire land, he said.

Back in Sakarpura, villagers say they are hoping for long-term solutions to reduce the risk of further water-related disasters. But in the meantime, they are bracing for the next flood, which may very well occur before the government’s recovery program is complete. The 2018 monsoon is fast approaching, and meanwhile, the broken embankment on the nearby Khado Khola has yet to be properly repaired.

Radha Devi Ram, a local tenant farmer, says she lost the rice crop she had planted on her landlord’s land.  She invested about 20,000 rupees, including for seeds, fertilizer, and hiring a tractor and labor for ploughing and planting. Left struggling, some people in the village have borrowed from local money lenders, but Ram says that rather than go into debt, her husband went to Punjab state in India to work as a laborer. She is raising the children on her own in his absence.

“Since the flood, there are no men left in my home,” she said.

Peter Gill is an American journalist based in Nepal.  He tweets at @pitaarji.

Bhola Paswan is a Nepali journalist who focuses on education and Dalit issues.  He writes for Nagarik, Kantipur, and others, and tweets at @paswanbhola.

5 Years of Local Governance in Nepal

Nepal is heading into its second round of local elections under its 2015 constitution. How have local governments fared in their inaugural session?

How will the U.S. grant – approved despite a raging controversy – factor into both upcoming elections and Nepal’s diplomatic positioning?

How did a grant from the United States turn into a years-long political battle in Kathmandu?