In tea shops, office break rooms, and on social media, Nepalis are talking about the recent arrest of one of the country’s most popular journalists. The case has exposed widespread disaffection with politicians and the direction in which the country is headed more generally.

On August 15, police detained Rabi Lamichhane, a television show host, from his News 24 studio in Kathmandu in connection with the death of a former employee.  That man, Salikram Pudasaini, had hanged himself in a hotel room in the city of Narayanghat 10 days earlier, leaving behind a video suicide note in which he alleged he was taking his own life because of mistreatment by Lamichhane and two other people. Lamichhane and the others accused were charged with “abetting suicide,” which is criminalized — although not clearly defined — under the country’s Criminal Code.

Following the arrest, thousands of Lamichhane’s supporters, who view the charges as spurious, held street protests. After Lamichhane was released on bail on August 26, giant crowds celebrated.

Although the charges against Lamichhane are not directly related to his reporting activities, some see the case as a crackdown on freedom of speech. A number of journalists have been arrested since the Nepal Communist Party (NCP) won national elections in a landslide in 2017, and the country’s press freedom score — as determined by Reporters Without Borders — worsened in 2019. Defending a legislative bill that could further reduce press freedom, the Minister for Communication and Information Technology recently told Parliament, “[The press] is always humiliating politicians. If you tarnish the reputation of the political leaders… then the institution [of democracy] is finished. If that is the definition of press freedom, then the government cannot agree with it.”

However, the public backlash against Lamichhane’s arrest is about more than  press freedom. Lamichhane’s investigative news show, Sidha Kura Janata Sanga, or “Straight Talk with the People,” has made him wildly popular, especially among working-class people and youth. The show exposes corruption in Nepal’s government, businesses, educational institutions, and society at large. Sidha Kura videos are viewed millions of times on YouTube, and there are dozens of Rabi Lamichhane fan clubs on Facebook, with hundreds of thousands of likes — an impressive feat in a small country like Nepal.  Recently, a folk song written by a Lamichhane supporter demanding his release from police custody was a top-trending video on YouTube. A court of law has yet to rule on Lamichhane’s culpability in Pudasaini’s death, for which he faces five years in prison. However, the outpouring support demonstrates the deep resonance of his show’s message: Corruption is rife in all spheres of Nepali life and must be challenged.

A still from one of Rabi Lamichhane’s Sidha Kura Janata Sanga episodes in 2017. COURTESY: YouTube

The suicide case is complicated, with conflicting narratives from different people involved.

In the suicide note/video  — which was leaked to a news outlet — Pudasaini alleges that Lamichhane paid him poorly and was himself corrupt, using his show to settle personal vendettas and enrich himself by blackmailing powerful people. Pudasaini claims that Lamichhane had threatened him after Pudasaini talked about exposing the show’s duplicity. He also complains about mistreatment by another News 24 employee named Yubaraj Kadel and a woman named Asmita Karki. The police allege that Karki, Kadel, and Lamichhane had planned to produce an episode of Sidha Kura falsely sullying Pudasaini’s reputation, thereby precipitating his suicide. However, an investigation by Kantipur, a leading daily, suggested that the police case lacks concrete evidence beyond the suicide note.

Karki, in her statement to the police, gave another explanation for Pudasaini’s suicide. She said that she had been in a relationship with Pudasaini, but in the preceding weeks, had learned he was married and so tried to end the affair. However, Pudasaini refused and became abusive, so Karki went to Lamichhane for help. In his police statement, Lamichhane gave a similar account. He suggested that Pudasaini may have feared his show would expose the extramarital affair, but denied that any such episode was in production or even planned before the suicide.

Lamichhane will be tried under a law that was passed in 2018, based on similar Indian legislation designed to protect marginalized individuals from blackmail or abuse. According to The Kathmandu Post, 77 people have been tried under Nepal’s law to date. In recent weeks, various op-eds have criticized the vague definition of “abetting suicide,” which leaves room for interpretation and abuse. To Lamichhane’s supporters, the case against him is a misuse of the ambiguous law.

Raju Basnet, the editor of a small newspaper in Kathmandu Valley who was himself detained by police last year, believes that the police are after Lamichhane because of his investigative reporting. “Rabi Lamichhane has done an amazing job reporting from the grassroots, focusing on corruption… He’s a leader and speaks truth to power,” says Basnet.

Lamichhane, who is 44 and youthful, immigrated to the United States as a young man and managed a Subway sandwich restaurant in Baltimore for a time before returning to Nepal. His media career gained momentum in 2013 after he gave a world record-setting 62-hour live broadcast on the topic “Buddha was born in Nepal” — a point of pride among Nepali nationalists.

Sometimes derided by the mainstream media for his populist style, Lamichhane’s brand of journalism is unconventional, energetic, and indignant. Smartly dressed with gelled hair, Lamichhane begins each Sidha Kura episode by looking into the camera and, speaking over a rock guitar soundtrack, editorializes on issues relevant to viewers, particularly the poor and migrant workers “sweating in the desert” (several million Nepalis work in the Gulf States and Southeast Asia, and many watch his show online).

The show’s theme is corruption, both within the government and in society at large. Corruption has long been a problem in Nepal, and some particularly egregious cases have come to light in recent years. In 2016, a decade of daily scheduled power cuts came to an end after it became clear that they were caused by corrupt utility officials siphoning off electricity for hotels, industries, and other businesses in exchange for bribes. In 2018, a lucrative kick-back deal involving the purchase of two Airbus jets by the national airline, as well as a gold-smuggling ring at the international airport — run in part by high-ranking police officers — were exposed. The head of the government’s anti-corruption watchdog agency was videotaped taking a bribe earlier this year and was forced to resign.

In a society where public integrity is seemingly scarce, Lamichhane’s straight talk has found a receptive audience. “Rabi Lamichhane is popular because people are searching for an alternative — any alternative,’’ says Nabin Baral, a documentary photographer in Kathmandu. “It’s like when a person is drowning, they will cling to any log they can find.”

Part of Sidha Kura’s appeal is that in addition to high-level corruption, it also exposes low-level, everyday abuses. The show includes a segment in which viewers call in and complain about being abused or defrauded. In one episode, Lamichhane’s team exposed a village money-lender for charging exorbitant interest and using violence to recoup loans.

“Anyone who has a problem can call and [Lamichhane’s] team will investigate,” says Basanta Chaudhary, a young plumber in Kathmandu. “Say I’m doing a job and the client refuses to pay me. Rabi dai would investigate,” says Chaudhary, using an honorific term meaning “older brother” for the journalist.

Asmita Lama, 30, works as a tailor in Kathmandu and says she has seen every episode of Sidha Kura  “Female migrants go abroad to work and they get exploited. Rabi dai has helped to bring some of them back home. That’s why I like him very much,” she says. 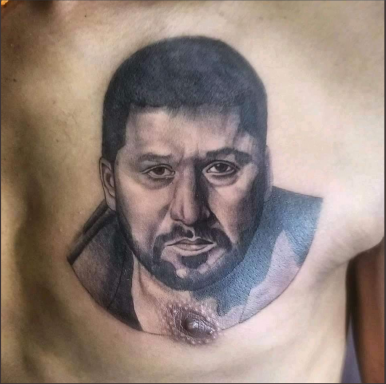 A tattoo of Rabi Lamichhane shared by a fan on Twitter. Credit: @jhankribajyai

In a sting operation in one episode, Lamichhane barged into a Kathmandu hotel room to expose a rendezvous between a university professor and a female student whom he was sexually exploiting. Lamichhane berated the professor on camera, saying “This girl, she respects you as a father!” He swore at the man, channeling the audience’s ire before police took the culprit into custody.

To many of his fans, Lamichhane’s show is like a parallel court of justice, an alternative to the official system that they see as bureaucratic, sluggish, and corrupt. The suggestion that Lamichhane is himself corrupt, or was somehow responsible for Pudasaini’s death, is unfathomable to them. Many fans believe conspiracy theories, including that the suicide note/video itself was a fake, a claim for which there is little evidence.

Government officials have cautioned against a “media trial,” or interference by Lamichhane’s fans in the judicial process. On Twitter, one user wrote, “I wonder how Nepali people knew Rabi Lamichhane was innocent before court hearings?” It is unclear how fans would react should the court issue Lamichhane a guilty verdict at the end of the trial.

Following his release on bail from police custody, Lamichhane held a press conference in Narayanghat. “We are on the side of truth, facts, and justice. The rest, the people can judge for themselves,” he said.

At the end, a supporter asked him if he would join politics himself.

This was his answer: “When people say that I — or others who have contributed to the country — should be made prime minister and lead the country, that comes from a desire to see honest leadership. For the time being we are watching and seeing, but who knows what the future will bring? The door [to enter politics] is closed, but it’s not locked.”

Peter Gill is a Kathmandu-based journalist who writes on the environment, politics, human rights issues, and more.  Follow him on Twitter at @pitaarji

After the Flood: Nepal’s Slow Recovery

Amid decentralization, Nepal has been slow to recover from the devastating 2017 floods.

By Nirnaya Bhatta and Maximillian Morch

The 2015 Constitution failed to address the demands of Madhesi and indigenous populations.

11 Years on, Has Nepal’s Republic Succeeded?

Pessimism about Nepal’s politics is common, despite significant changes since the declaration of the republic in 2008.

Nepal Recovers Slowly, But US Says It's Time to Leave

The Western Balkans has seen an increased Chinese footprint, raising concerns that the region will be a battleground for great power competition.

The ROK’S “Smart Navy” is a vital project, but will require more than just new technology.

Amid a public trust crisis sparked by the new coronavirus, the 'SARS hero' has been tasked to reassure us it’s going to be okay.

The new weapons system can reportedly be fitted inside the Su-57s internal weapons bay.

The Pentagon adopted a set of ethical guidelines on the use of AI.

As many as 200 were arrested for attending a pair of unsanctioned rallies. Meanwhile, a proposed law promises more of the same.

An ‘October Surprise’ From North Korea?