WASHINGTON – Last week, I was in Almaty to attend a court hearing for my client, Kazakh businessman Iskander Yerimbetov. Arrested on money laundering allegations and eventually charged with ostensible “fraud,” in reality he has been detained since November 2017, I believe, to force his sister to return to the country so she can provide false evidence against an opposition leader in exile whom President Nursultan Nazarbayev is obsessed with silencing and has for years eluded his grasp.

In the chaotic four-hour hearing on June 14, I observed six serious violations of international law:

More than 100 family, friends, civil society activists, and journalists tried to attend the hearing. Despite having a large courtroom down the hall and in other cases having had overflow broadcasting, the judge in Yerimbetov’s case instead decided to hold the proceeding in a stifling hot courtroom that held no more than a few dozen people, violating his right to a public trial.

Yerimbetov was held in a glass aquarium at the back of the courtroom, interfering with his right to the presumption of innocence, as criminal defendants must not be presented in court in a way that makes them look dangerous or guilty. At the same time, three other co-defendants were sitting with their lawyers with the public.

Our local counsel made a simple request for me to be able to visit Yerimbetov later in prison and that request was denied, interfering with his right to counsel.

Then, in a bizarre twist, one of the prosecutors took a photo of my passport on his telephone and sent a copy to someone; it had been with the judge in relation to my request to visit my client. This was captured on video. When I confronted the prosecutor at a recess about this violation of my right to keep my personal data private, he first claimed he did nothing wrong, then seemed to delete the photo, and when I asked him if he had done nothing wrong, why he had deleted it, he had no answer. I then asked him if he took the photo on a work phone – it turned out that he took the photo on his personal phone. That surreal exchange was captured on video too.

Without explanation, the judge denied the defense’s motion to grant Yerimbetov bail despite a presumption under international law that bail be granted, and despite the lack of a valid order to keep him detained.

And finally, after the judge walked out on a recess, the court clerk told everyone that he would return shortly. Yet for no obvious reason one of the three guards in court entered Yerimbetov’s aquarium, attached a handcuff to one wrist, and starting repeatedly jerking it hard to get him out as if he was leading out an animal on the leash, causing serious bruising and chafing. This constitutes cruel, inhuman, or degrading treatment.

These violations are not likely simple incompetence on the part of the judge. According to the United Nations “the independence of the judiciary [in Kazakhstan] is not sufficiently secured under the law and in practice.” The U.S. State Department put it more bluntly: “The executive branch sharply limited judicial independence … corruption was evident at every stage of the judicial process.”

But this case has been seriously irregular from the start. Yerimbetov was arrested without being shown a warrant, his home and business were searched without a warrant being presented, he was detained incommunicado for long periods and repeatedly denied access to counsel. It was later learned he had been subjected to physical and psychological torture, including threats to lock him in a cell with Islamic terrorists or inmates infected with HIV or tuberculosis. Throughout the interrogations without his counsel by the secret service officers, he was repeatedly told by them he would be released if he simply got his sister, who has political asylum in Belgium, to return to Kazakhstan. In the midst of this ordeal, Kazakh authorities then refused to provide access to the UN-mandated torture monitoring group in violation of its obligations under international law.

Numerous independent organizations have spoken out against Yerimbetov’s arbitrary detention and torture. These have included the Coalition of NGOs of Kazakhstan Against Torture, Freedom House, the Council of Europe, the Organization for Security and Cooperation in Europe, and Human Rights Watch, among others. 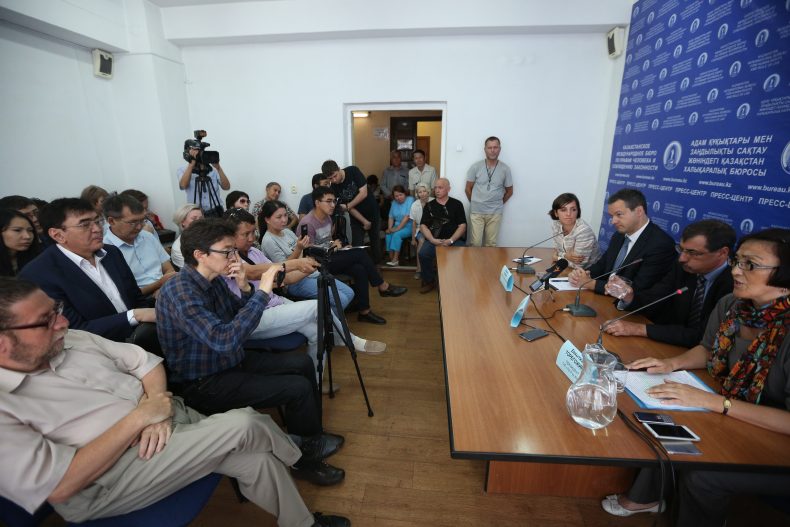 Press conference with human rights defenders in Almaty hosted by the Kazakhstan International Bureau for Human Rights and the Rule of Law. Photo courtesy of Jared Genser.

After his parents were finally able to visit him, they held a press conference with his mother crying as she described what he had been through. Kazakh authorities then launched a unprecedented global campaign to try and discredit his reports of torture.

The authorities sent in a video crew to film Yerimbetov in the detention facility without his permission and then broadcast it on national television – claiming that his shielding himself from the camera during this dramatic invasion of privacy proved he had not been tortured. They paid medical doctors from the Metropolitan Police Service and King’s College London to fly in to conduct “independent” investigations – they showed up in Kazakhstan unannounced.

Yerimbetov received another unannounced visit at the detention center from former U.S. Representative Randy Forbes, who refused to provide any explanation as to how he got inside. He told my client he was in Kazakhstan and just interested in learning more about his situation. A short time later, Congressman Forbes filed with the U.S. Department of Justice as a foreign agent of the Government of Kazakhstan working on a $2 million lobbying contract. I also heard from the former chief judge of the New York Court of Appeals, Jonathan Lippman, whose client was the Ministry of Justice of Kazakhstan. He wanted to discuss my client’s “claims,” but failed to answer my question as to how he was helping with his prosecution.

All these foreign visitors were brought in by the Kazakh authorities to meet my client, without his permission, whereas I, his lawyer, have been blocked from meeting with him.

Despite two other independent experts who were allowed to visit concluding Yerimbetov had been tortured and his relaying reports of his torture to American and European diplomats, the Government of Kazakhstan concluded he hadn’t ever complained of torture and there was no evidence he had been tortured, closing the case.

Yerimbetov’s torture is hardly an isolated incident and the dismissal of his claim was expected. According to Amnesty International, “Of the hundreds of reports of torture that human rights organizations receive each year in Kazakhstan, just a handful ever led to a conviction … impunity for torture and other ill treatment by law enforcement officials remain commonplace.”

In subsequent months after the violent physical torture ended, Yerimbetov repeatedly complained about the lack of medical treatment he had received from wounds inflicted by beating, minimal heating despite temperatures that had dipped below -20 degree Celsius, dirty water and inadequate nutrition, the presence of bed bugs and rats, and unsanitary toilet facilities. These complaints are also fully consistent with the observation of the State Department that “[p]rison conditions [in Kazakhstan] were generally harsh and sometimes life threatening, and facilities did not meet international health standards.”

At the end of my visit, a group of high-level Kazakh officials from different agencies were kind enough to meet with me in Almaty. Over several hours, we had an interesting exchange of views, but the officials did not yield on even a single point. Indeed, they insisted that every single aspect of Yerimbetov’s case has been handled in strict compliance with Kazakhstan and international law.

As we were concluding, I expressed my serious concerns about the political nature of this case. One official strenuously objected, insisting I was wrong and this was a “simple fraud case.” I can really only imagine what a “real” political case might look like in Kazakhstan.

Jared Genser is a lawyer who serves as counsel to Iskander Yerimbetov.

Kazakh politics plays out far from the steppe -- in New York lofts and courts.

The legal battle for justice for those arbitrarily detained and those who were brutally tortured during Kazakhstan’s Bloody January imploded before it started.

Why Is North Korea Supporting Russia on Ukraine?

In her latest statement, Kim Yo Jong blamed the United States for “escalating the war” by sending tanks to Ukraine.

Kazakhstan’s Uranium Industry and the Middle Corridor Come Together

Astana is betting heavily on the Middle Corridor as a route to access the international energy market without Russia.