With space tightening and purges intensifying, the Chinese Communist Party (CCP) core is likely to enjoy the safest passage through to the 20th Party Congress this fall. Ding Xuexiang is concurrently CCP General Secretary Office director and Central Committee General Office director. This means he runs Xi Jinping’s office, working with him day to day, as well as being in charge of keeping the Central Secretariat in line. General Office secretary is a bit like a party whip in a Westminster Parliamentary democracy system.

Policy-wise, Ding is the perfect combination of CCP institutionalist and science and technology innovation policy advocate. This is perhaps the optimal policy meld for a decade likely to be defined by strong party rule and strategic technoindustrial competition with outside economic powers. Expect him to be have a strong leading role in post-2022 Party Leading Groups related to science and technology policy.

Ding is one of the party old guard. He began in heavy industry work, entering the workforce straight from university with only a bachelor’s degree. Ding came up in the materials research industry, a hugely important sector of innovation, industrial policy, and strategic resource development for the nationalist economic plan. New materials is a strategic policy area and developing new material technology also goes in hand with geoeconomic and strategic foreign resource policy. Although Ding did not join the CCP directly in university, in Shanghai Ding’s rise through executive party experience seems characteristic of someone protected by a leader within the party. Clearly competent enough to command the respect of the cadres he controlled, he also seems to have been marked early for promotion and shepherded upwards. 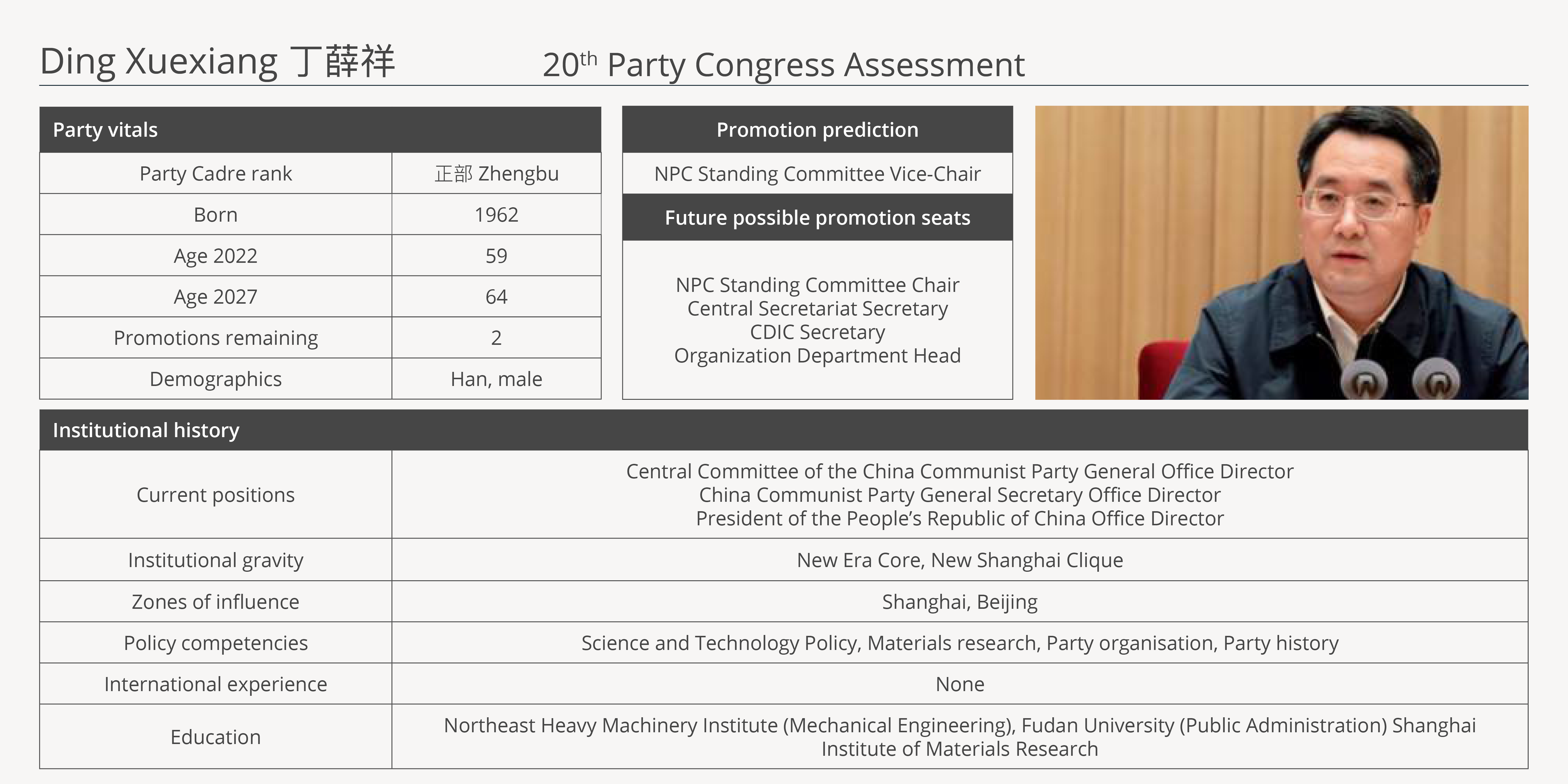 After studying in northern Hebei, undisturbed by the Cultural Revolution, Ding has spent his entire career in safe party seats in Shanghai and then in Beijing in the Central Committee. Prior to moving into politics at aged 37, Ding had a career in research, working progressively through research and administration and party positions within the Shanghai Materials Research Institute of the Ministry of Machinery Industry, now a state-owned enterprise under the China Machinery Industry Federation. Ding completed the mid-career Party School training in 1993, as well as being pushed through a Fudan master’s degree in public administration, both degrees completed as on the job training. Ding, though, is more likely to fall in with the Cultural Revolution learn-by-doing types than the new, younger school of university book learning cadres.

Ding worked through the CCP ranks almost entirely within the party positions. After initial promotions through the Science and Technology Work Committee and a requisite stint at a prefectural level post – in this case, as executive of a densely populated inner city Shanghai district – Ding then rose progressively through the Shanghai municipal Organization Department, General Office, and Politics and Legal Affairs Commission, the local version of the national domestic security apparatus. Rising initially through party positions within the Shanghai Institute of Materials Research, including as propaganda department director, means Ding has experience in all party positions of propaganda, organization, general office, and politics and legal affairs commission, making him the near perfect CCP all-rounder (Ding is missing only discipline inspection for a party policy full-house).

His seven-year career boost through the Shanghai municipal party positions elevated Ding first as an alternate member of the 18th Central Committee and then a full member and straight into the Politburo for the 19th Central Committee. As director of the General Office, Ding has also sat with Xi on the National Security Commission since 2017.

Factionally, Ding is perhaps one of the foremost members of the New Era Core. But in terms of the traditional geographic and institutional factions, his career is largely unremarkable. There is often a tendency to oversubscribe to the idea that the fringe provinces produce the most powerful cliques. Institutionally defined cliques such as the Communist Youth League, Shanghai Cliques, Industry Associations, and increasingly finance and fin-tech governance cliques are also just as important as the geographically defined factions. Ding is young for the New Shanghai clique, but also fits the well-worn pattern of Xi keeping insiders close. However, beyond his New Shanghai factional affiliation, Ding has been in the architect’s drafting room of the New Era project for the past 10 years. Ding is already established within the party’s ideology echelons; his role from 2022 will likely include a redefining of the sub-supreme power structures of the leading faction.

Ding has been at the top with Xi for the entire period since 2012, when he first reached zhengbu party cadre ranking. Ding was barely 50 years old when was made deputy director of the General Office at the start of Xi’s first term. By the second term in 2017 he had risen to the Politburo and, all things being equal, he is a strong contender to rise into the Politburo Standing Committee in 2022. Age restrictions mean he would be eligible for 2022 and 2027, making him a clear New Era Core leader to flank Wang Huning and Chen Min’er through the 2020s.

Ding is well place to guide the CCP in its pursuit of ephemeral policy goals and party signposts in its technoindustrial quest. Ding has also ideologically contributed to Xi Jinping’s “Rule by History” policy, speaking at the National Party History and Documentation Department Meeting in 2021, stressing the centenary goals of the CCP and the New Era mindset under Xi Thought, and publishing a People’s Daily editorial on Xi’s history resolution. We can expect Ding to be part of a Xi and Wang New Party History administration. Even if Xi were to be forced from power, Wang and Ding would still carry the factional history torch no matter who makes it to general secretary. 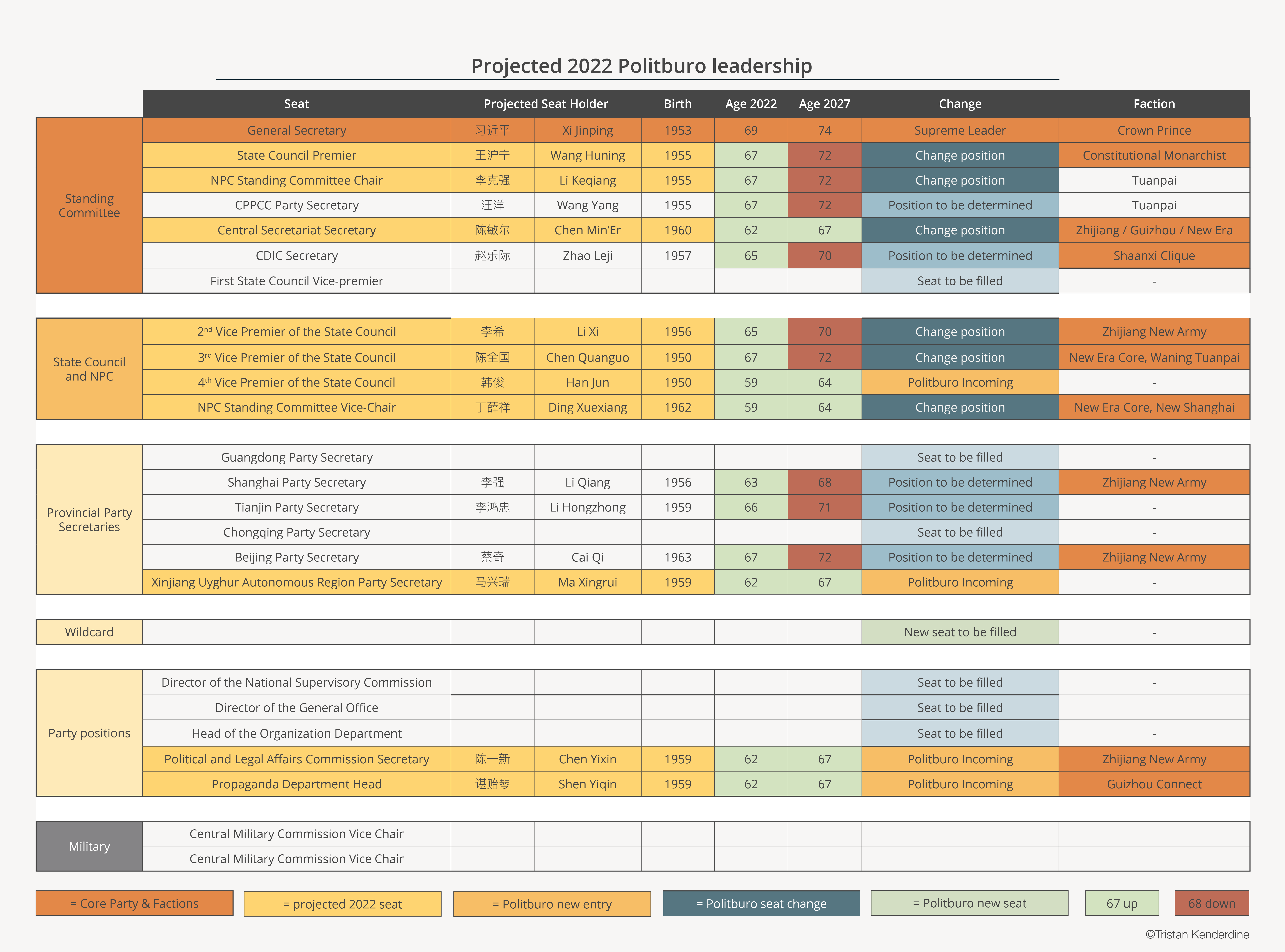 As incumbent director of the CCP’s Office of the General Secretary, Ding is sitting now in the position that Li Zhanshu held before his ascendancy. Regardless of Li being taken down or not in the run up to the 2022 Congress, he would be expected to retire under age limitations. There is thus a clear and natural path from Party General Office director to NPC Standing Committee chair and Ding could simply replace Li Zhanshu. A possible purge of Li, though, may be aimed at blocking off attendant personnel who could shepherd Ding into the higher echelons of power and ascending to the Politburo Standing Committee. The path-dependencies of this model mean keeping Wang Huning and Li Keqiang, which makes it difficult to place Ding in the Standing Committee.

With a 2027 promotion still remaining, Ding joining the cohort of Chen Quanguo sitting just outside the Standing Committee is more likely than the Xi dream team of Ding joining Chen Min’er and Wang Huning at the top. Although it is odd to conceive of Ding moving into a state position after a career entirely within party positions, there is a party-fication of state positions underway and NPC Standing Committee chair and vice chair is the natural path forwards for career party positioners. Central Secretariat secretary would also be a big promotion in the right vein of Ding’s abilities, but the Standing Committee is too stacked at the top for him to be likely to make it this way.

Ding is already one of the most powerful members of one of the most powerful Politburos in contemporary Chinese history. However, his fortunes are entirely tied to Xi Jinping, and while internal factional positioning continues through the run-up to the fall Congress, Ding is safe from any purges, so long as Xi himself survives. If Xi were removed from power, then Ding would also likely rapidly disappear. If Xi does form a third Politburo, though, Ding will have been an instrumental loyalist to the project and a third Xi administration will include Ding – whether or not he is formally seated on the Politburo Standing Committee.