In what has become something of a yearly ritual, Vietnam and China are once again trading diplomatic barbs over a Chinese oil rig in the South China Sea.

In May 2014, the China National Offshore Oil Corporation’s Haiyang Shiyou 981 (HYSY 981) oil platform moved into waters south of the Paracel Islands, which are controlled by China but also claimed by Vietnam. The resulting anger from Hanoi – and run-ins between Chinese Coast Guard vessels and Vietnamese ships — marked a recent low point in China-Vietnam ties. Anger in Vietnam even boiled over into violent anti-Chinese riots.

The rig moved away form the Paracels in August 2014, ahead of schedule (though Chinese statements indicated that the rig had simply finished its operations early). It returned to the South China Sea the next year, in June 2015, this time deployed  to the west of the Paracels, much closer to China’s Hainan Island.

Now HYSY 981 is back once again, and is again sparking diplomatic protests from Hanoi. This time, according to Vietnam News Agency and Thanh Nien News, the rig has been operating near the mouth of the Tonkin Gulf since April 3. Based on coordinates for the rig provided by the Vietnamese Foreign Ministry, its position is roughly the same as last year: south of China’s Hainan Island and west of the Paracels. China and Vietnam’s exclusive economic zones overlap in this area, but the rig is demonstrably closer to China’s Hainan than to Vietnam. 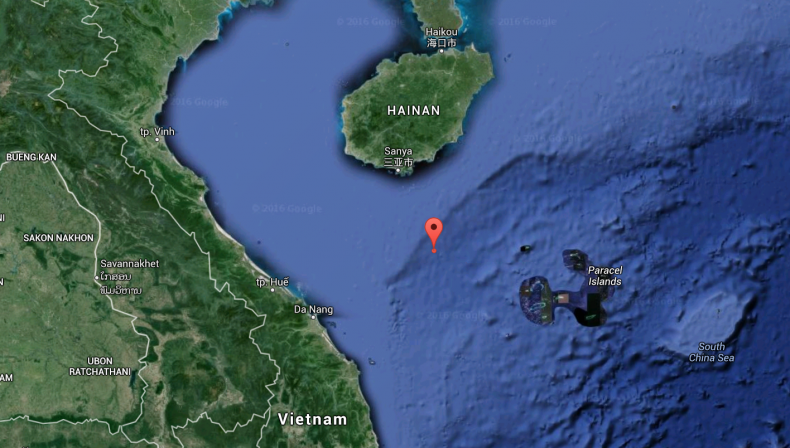 The location of HYSY 981 as of April 3. Image via Google Maps.

In announcing the rig’s location, however, Vietnamese Foreign Ministry spokesperson Le Hai Binh emphasized that Vietnam and China “are negotiating delimitation” in the area where the rig is currently located.

Vietnam “resolutely opposes the activity and demands China to cancel its drilling plan, immediately withdraw the HYSY 981 oil rig from the area, take no more unilateral action that complicates the situation, and make practical contribution to peace and stability in the East Sea,” Binh added.

Vietnam has given a diplomatic note protesting the oil rig’s placement to the Chinese Embassy in Hanoi. Vietnam also sent a separate note protesting China’s new lighthouse, which just began operations on Subi Reef in the Spratly Islands.

China’s own Foreign Ministry spokesperson responded on Friday in a regular press conference. “[T]he operation [of the oil rig] is in waters under undisputed jurisdiction of China. It is a normal activity of business exploration,” Hong Lei said. “It is hoped that the relevant party will be objective and reasonable about that.”

The current spat marks the first time Vietnam’s new leadership is having to tackle a maritime dispute with China. Vietnam just swore in new Prime Minister Nguyen Xuan Phuc on Thursday, while new President Tran Dai Quang took office on April 2 – one day before HYSY 981 moved to its current location in the South China Sea.

One crucial position has not turned over, however. The Communist Party of Vietnam (CPV) voted to keep its general secretary, Nguyen Phu Trong, in January. Since the 2014 oil rig crisis, Trong and  the CPV have attempted to restabilize ties with China, particularly through party-to-party exchanges with China’s own Communist Party.

China and the US Court Vietnam

"Both the U.S. and Vietnam expect greater levels of military cooperation, to the chagrin of China."

Can China and Vietnam Overcome Their Territorial Disputes?

Yang Jiechi's visit to Vietnam was full of optimism, but the China-Vietnam relationship remains fragile.

No, China Did Not Blink by Removing Its Oil Rig

Like the decision to install the oil rig, the removal is also part of long-term strategic plan. It will come back.