On Sunday afternoon, North Korea launched a Pukkuksong-2 solid fuel, medium-range ballistic missile (MRBM) from Pukchang county in South Pyongan province. The missile landed in the Sea of Japan, flying to a range of 500 kilometers and exhibiting an apogee of 560 kilometers. The launch marks the second North Korean ballistic missile test since South Korean President Moon Jae-in was inaugurated. 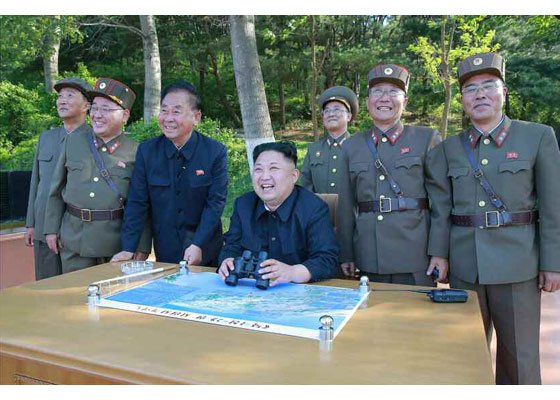 As usual, North Korea released a statement through its state-run Korean Central News Agency, noting that Kim Jong-un “supervised a test-fire of ground-to-ground medium-to-long range strategic ballistic missile Pukguksong-2.” The statement noted the function of this second flight test of the system: “The test-fire of Pukguksong-2 was aimed to finally verify all the technical indexes of the weapon system and thoroughly examine its adaptability under various battle conditions, before its deployment at military units for action.” Notably, the KCNA statement adds that Kim Jong-un “approved the deployment of this weapon system for action.”

Images released by North Korea’s Rodong Sinmun offer additional insight into how North Korea may look to use the Pukkuksong-2, which is unique in that it is North Korea’s first land-based, solid-fuel MRBM with a tracked transporter-erector-launcher (TEL), that allows for off-road (and, critically, off-paved-road) use. Accordingly, the images show the Pukkuksong-2’s TEL erecting and launching from an unremarkable patch of dirt next to a body of water (likely Yonpung-ho Lake). This is a departure from the February test, where the TEL launched the missile off paved ground near Kusong.

As I explained in February, the Pukkuksong-2 is a significant development for North Korea because it would allow it disperse ready-to-fire solid-fuel missiles on launchers that can fire from nearly anywhere all over the country. As a result, Pyongyang’s nuclear forces would enjoy greater survivability against the United States and South Korea, who may have otherwise been more tempted to undertake a preemptive attack.

Additionally, solid-fuel systems like the Pukkuksong-2 would not require the kinds of support vehicles liquid-fuel missiles like North Korea’s Nodong might; the additional vehicles would generate a more significant satellite signature, making detection and destruction more manageable for North Korea’s enemies. (Melissa Hanham of the James Martin Center for Nonproliferation Studies notes, though, that the tracked TEL does leave “distinctive tread marks,” which could aid in detection and tracking.) 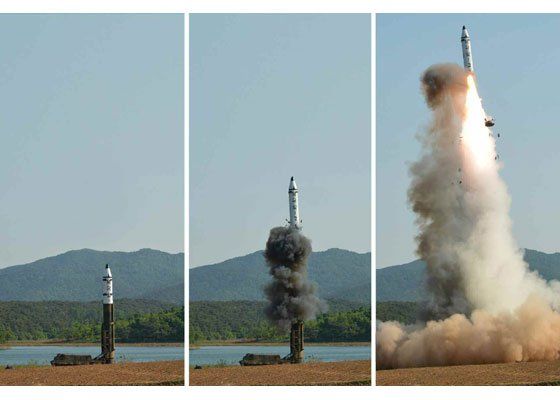 From the images released so far, the ejection and launch of the missile itself look quite similar to the February launch. The Pukkuksong-2 TEL still “cold launches” the missile (ejects it out of the canister using pressurized gas, with the missile’s engines igniting in the air). Interestingly, the images show a considerably dirtier (smokier) ejection when compared with imagery from February, which could be a result of natural variance between the two missiles or even the TELs.

Finally, what’s striking about the imagery released by Rodong Sinmun is a series that shows what is presumably a near-real-time image of the earth taken by the Pukkuksong-2’s reentry vehicle. In one image, Kim Jong-un is seen pointing at a monitor displaying an image of the earth too. The authenticity of the images isn’t clear, but North Korea clearly wants outside observers to be impressed with these capabilities.

There’ll no doubt be more to say about this missile as analysis continues. The bottom line from Sunday’s test seems to be that North Korea is growing increasingly confident in its solid-fuel missile program and may look to take the experience its engineers have gained through the Pukkuksong series of missiles to more advanced, longer-range systems — perhaps one day, even an intercontinental-range system.

From the perspective of Pyongyang’s nuclear strategy and thinking about deterrence, Kim Jong-un declaring the Pukkuksong-2 deployment-ready is a significant moment. North Korea’s self-stated nuclear strategy hinges around its ability to hold in-theater U.S., South Korea, and Japanese military targets under threat. The Pukkuksong-2 MRBM appears tailor-made to do just that.

North Korean scientists tested a new solid fuel engine on October 2017. What system is it destined for?

The tests featured a new type of short-range ballistic missile system known to U.S. authorities as the KN24.

No, North Korea Isn't Dependent on Russia and China For Its Rocket Fuel