Even as North and South Korea engaged in hours of talks over the weekend, in the hopes of defusing tensions, China was apparently making its own preparations for a worst-case scenario on the Korean peninsula.

On Saturday, Chinese social media users began posting pictures of tanks and other military equipment moving through city streets. The photos were purportedly taken in Yanji, China, the capital of Yanbian prefecture in Jilin province, which lies along the China-Korea border.

Other Chinese social media users posted pictures of a train appearing to carry more military equipment – but those pictures were explained as showing military technology on its way to Beijing for the upcoming military parade. There was some confusion about this point, with some of the same pictures being identified by different sources as taken in or outside of Yanji and Beijing. 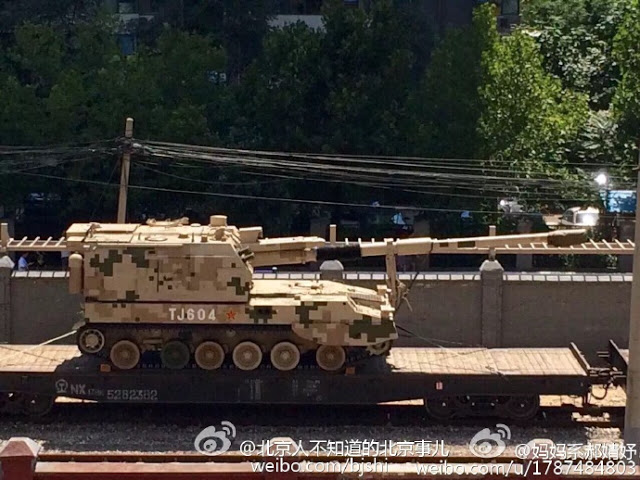 This photo, showing the transport of a 155 mm self-propelled gun, was variously identified as having been taken near the North Korean border and outside of Beijing. (Credit: Weibo/ 北京人不知道的北京事儿)

NK News, in its analysis of the images, said the photos represented “a mechanical unit at least the size of a brigade,” made up of “PTZ-89 tank destroyers (Type 89), a PGZ-95 self-propelled anti-aircraft guns (Type 95 SPAAA), and 155 mm self-propelled guns.” Kim Min-seok of the Korea Defense and Security Forum told NK News that there’s precedent of China sending additional units to the border region during times of increased tensions on the peninsula: “During the bombardment of Yeonpyeong in 2010 and after the purge of Jang Song Thaek in 2013, Chinese units were quickly sent to the area to prevent any unexpected surprises from the China-North Korea border.”

NK News’ analysts agreed that China was trying to send a message to North Korea by moving additional military equipment close to the border: Don’t do anything rash.

Interestingly, the photos of troop movements in Yanji began appearing on Chinese social media on Saturday morning – and North and South Korea began their high-level talks on Saturday evening. The timing suggests that Beijing may have massed tanks near the North Korean border to provide extra incentive for the negotiations to go smoothly.

If China did indeed send its forces to the border to help intimidate Pyongyang into negotiating an end to current tensions, that would be music to Seoul’s ears. South Korea’s Cheong Wa Dae recently announced that President Park Geun-hye will attend China’s September 3 celebrations of the 70th anniversary of the end of World War II – despite reports that the United States had pressured her to turn down the invitation. At the time, Korean media suggested Park made her decision in the hopes that Beijing would reciprocate by helping encourage North Korea to scale down tensions. The announcement about Park’s trip to Beijing was made on Thursday, just after North and South Korea exchanged artillery fire.

The next day, on August 21, Chinese Foreign Ministry spokesperson Hua Chunying addressed the tensions on the Korean Peninsula for the first time, saying that China “is deeply concerned about what has happened recently.” China “opposes any action that may escalate tension,” Hua added, urging “relevant parties to remain calm and restrained.”

However, the military movement may have a far less interesting explanation. On August 21, Kim Jong-un famously issued an order for the Korean People’s Army to “be fully battle ready.” Park, meanwhile, had also called for “strong military readiness” in South Korea and the U.S. military in South Korea went on an “enhanced [alert] status.” China may merely have been responding in kind, raising the readiness of troops in the border by mobilizing additional supplies.

On Monday, North and South Korea reached an agreement to deescalate tensions. North Korea expressed “regret” over a landmine explosion that seriously injured two South Korean soldiers (though, as John Power points out, Pyongyang did not actually apologize or accept responsibility for the blast). In return, Seoul will once again stop broadcasting anti-North propaganda in the border region. China’s government welcomed the agreement.

How Did China Lose South Korea?

How did China-South Korea relations fall so far so fast?

By Paul Haenle and Anne Sherman

China-South Korea ties may be at their "best ever," but the two sides are far from united on an approach to Pyongyang.

North Korea will always loom large in China-South Korea ties, but Beijing and Seoul are trying to move beyond that.